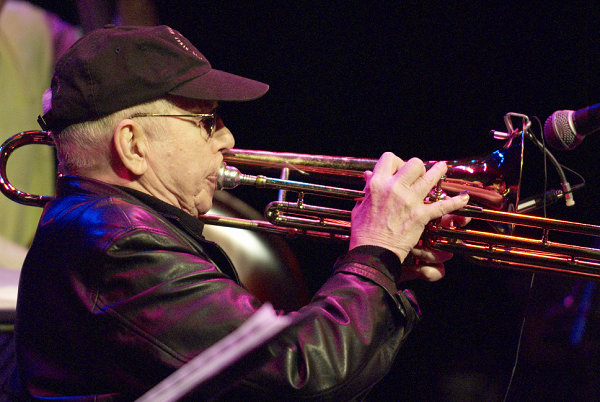 BY JACK BOWERS
February 5, 2012
Sign in to view read count
Bob Brookmeyer, a Renaissance man among jazz musicians who died December 15, 2011, four days before his eighty-second birthday, will be remembered as many things: composer, arranger, musician, educator, outspoken arbiter who brooked no nonsense and wasn't shy about letting others know when he believed they were not giving the music he loved the best they had to offer. What I remember best about Brookmeyer was the lithe, ever-swinging valve trombone that complemented such luminaries as Stan Getz, Gerry Mulligan, Zoot Sims, Jimmy Giuffre, Clark Terry and others during the 1950s and 1960s, epitomizing his Kansas City heritage in a series of memorable albums that sound as fresh today as they did more than half a century ago.

Never one to stand still for long, Brookmeyer went on to explore and enhance other areas of the musical spectrum, composing and arranging for a number of big bands and smaller groups including his Netherlands-based ensemble, the New Art Orchestra, meanwhile teaching at the New England Conservatory of Music, where his students included the well-known composer / arranger Maria Schneider.

Brookmeyer was arranging to the end, with Standards, a new album by the NAO featuring vocalist Fay Claassen, released on ArtistShare only two weeks before his passing. Although not as widely known or celebrated as a pianist, Brookmeyer was capable enough at the keyboard to have played with several big bands and recorded a two-piano album with the great Bill Evans. He worked as a studio musician in New York City in the 1950s and 1960s, and for another decade after moving to Los Angeles in 1968. A serious drinking problem led him to consider leaving music to become an alcoholism counselor but he returned instead to New York in 1978 and resumed his career as a full-time jazz musician, rejoining the Thad Jones / Mel Lewis} Orchestra (renamed the Vanguard Jazz Orchestra after Thad's departure) as music director while also composing avant-garde classical music. He spent the rest of his life composing, arranging and teaching in the U.S and in Europe.

Brookmeyer was named an NEA Jazz Master in 2006, and recently earned his eighth Grammy Award nomination for an arrangement from the Vanguard Jazz Orchestra's latest album, Ever Lasting. As noted, he was many things to many people but the buoyant sound of that valve trombone isn't easily forgotten.

The "hidden history" of women in jazz (and boy, has it been well-hidden) is surveyed in a new video, The Girls in the Band, directed and co-produced by Judy Chaikin. Led by saxophonist Roz Cron, "a group of players from the 1930s and 1940s relate their triumphs and struggles as they describe the contradictions and sexism faced by talented distaff musicians in [a] male-dominated world." Performance clips touch on the International Sweethearts of Rhythm, the Ada Leonard Orchestra, the Melodears, the Ingenues and other groups. Cron recalls being one of the few white players in the Sweethearts of Rhythm, led by ace saxophonist Vi Redd, saying she "felt ashamed of my race" while describing efforts to darken her face when the band toured the South during the waning days of Jim Crow laws.

The documentary also covers such early stars as Mary Lou Williams, Melba Liston and Marian McPartland who opened the door for today's women to move to the forefront among jazz musicians around the world. Contemporary musicians offering their insights include Terri Lyne Carrington, Jane Ira Bloom, Geri Allen, Esperanza Spalding, Anat Cohen, Herbie Hancock and the late Dr. Billy Taylor. The film was shown recently at the Dubai, Vancouver and Palm Springs Jazz Festivals, with plans presumably to present it at other events in the states and overseas.

Clem DeRosa, who began his long career in music as a drummer and played during World War II in one of Glenn Miller's Army Air Corps bands, died December 20. He was eighty-seven years old. After the war, DeRosa performed with a number of stars including Charles Mingus, Marian McPartland, Teo Macero, Teddy Wilson, Thad Jones, Ben Webster, Clark Terry, Phil Woods, Coleman Hawkins, John LaPorta, Bobby Hackett and others. He was best known, however, as a leading pioneer of jazz education whose professional-sounding student ensembles performed on the Johnny Carson and Merv Griffin television shows. DeRosa, a co-founder and later president of the International Association of Jazz Educators, taught at Columbia University's Teachers College while continuing to perform and later to lead contemporary versions of the Glenn Miller, Jimmy Dorsey and Benny Goodman orchestras. He also worked closely with Stan Kenton in jazz clinics that were started in the early 1960s. DeRosa was inducted into the IAJE Hall of Fame in 1990, about a decade before he established American Jazz Venues, a non-profit group dedicated to presenting the music to newer and younger audiences, principally through its musical voice, the American Jazz Repertory Orchestra. DeRosa's older son, Richard, is head of jazz composition at the University of North Texas in Denton. He is also survived by his wife, Shirley; a daughter, Dianne, and son, Gary.

A dozen of the country's top high school jazz bands have been chosen to take part in the seventh annual edition of the Swing Central Jazz band competition and workshop, sponsored by the Savannah (GA) Music Festival. Participating students work with jazz mentors for three days, perform in showcases on Savannah's River Street, play in competition rounds and attend a variety of SMF performances during the event, which takes place March 28-30. The bands also compete for $13,000 in cash awards.

Big Bands Are Still Out There

And you can hear some of the best in the New York area performing on selected Tuesday evenings at the New York City Baha'i Center, 53 E. 11th Street (between University Place and Broadway). General admission is $15, $10 for students. On February 14, the Ben and Frank Perowsky Big Band performs two shows, at 8:00 and 9:30 p.m. For information, phone 212-222-5159.

11. University of Memphis, Out of the Bluffs (UMR)