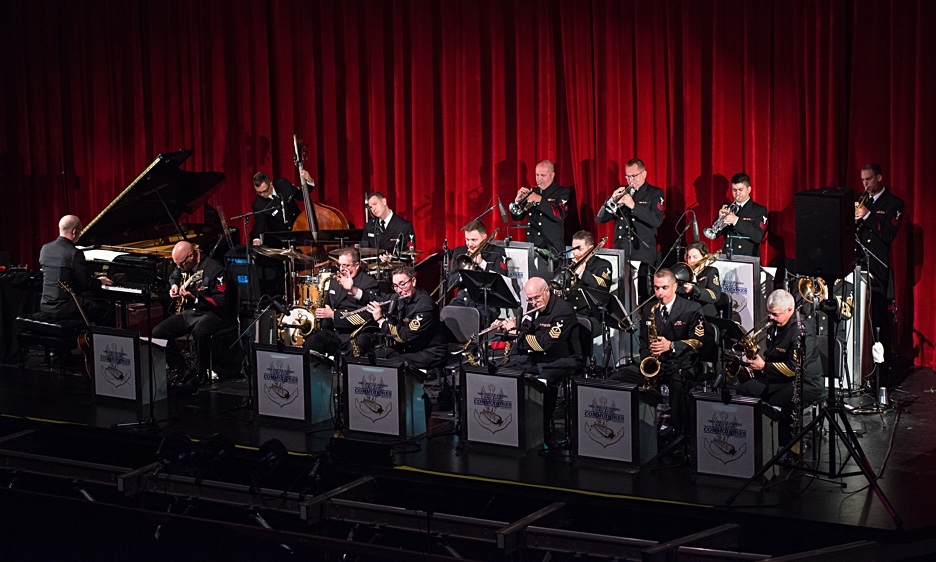 In terms of instrumentation and arranging as far as band was concerned, I had a tremendous education in the Air Force in those years that I served there
—John Williams

US Air Force Airmen of Note

The premier jazz ensemble of the US Air Force, the The Airmen of Note is one of six musical ensembles that comprise The US Air Force Band. Created in 1950 to continue the tradition of Major Glenn Miller's Army Air Forces dance band, the Airmen of Note present big band as well as more contemporary forms of jazz across the US, to deployments around the world, and local performances in Washington, DC.

The Airmen of Note have collaboratively performed and recorded with such jazz luminaries as Dizzy Gillespie, Joe Williams, Sarah Vaughan and Doc Severinsen; in 1990, they established their Jazz Heritage Radio Broadcast Series, which features the Airmen performing with jazz icons and broadcast to millions over National Public Radio, independent jazz radio stations, and satellite and online radio stations.

Trombonist Glenn Miller was already a successful civilian bandleader and recording artist when he joined the Air Force in 1942. Miller restructured the Air Force band and orchestra from a traditional military marching band into a contemporary dance ensemble that contributed one of the most important songbooks to the entire swing generation. Miller's strong jazz inclinations directly led to the formation of the Airmen of Note, who played his band in the famous biopic The Glenn Miller Story.

Composer John Williams entered the USAF in 1952. His primary duties were pianist and brass player, but he also composed and arranged for the band. "In terms of instrumentation and arranging as far as band was concerned, I had a tremendous education in the Air Force in those years that I served there," Williams recalled in a 2016 interview on The USAF Band YouTube channel. ""I don't think there's any question that it was part of my musical formation and my formation as a musician and probably as a person also."

US Army Bands, US Army Blues

Gen. John J. Pershing, Commander of the American Expeditionary Forces on the Western European front during World War I, was so convinced that that bands were essential to troop morale that he instituted training to improve the Army's band program, and nearly doubled regimental band strengths from 28 to 48 pieces. Nearly five hundred bands served in the US Army during World War II.

One of the most prestigious army bands today is the United States Army band known as "Pershing's Own." The U.S. Army Blues, the premier jazz ensemble of the US Army, was officially established as part of "Pershing's Own" in 1972. The US Army Blues play seldom-performed yet historically significant music from the Library's jazz archives, in collaboration with the US Library of Congress, to preserve the tradition of America's unique art form: jazz.

The US Army Blues has shared the stage with Dave Brubeck, Doc Severinsen, Stanley Turrentine, Slide Hampton and Dr. Billy Taylor in performances at the Monterey Jazz Festival, the Montreux Jazz Festival, Birdland in New York City, Blues Alley in Washington, DC, and other historic venues. US Army Blues members include Master Sgt. drummer Steve Fidyk, who has appeared on more than one hundred recordings (including sets from Tim Hagans, Wycliffe Gordon, Slide Hampton and Arturo Sandoval, and serves on the jazz faculty at Philadelphia's Temple University and University of the Arts; and Master Sgt. trumpeter Graham Breedlove, who has appeared on more than two hundred recordings and also served as soloist, composer, arranger and musical director on Voodoo Boogaloo (2010) and Back to the Bayou (2015) by another Army ensemble, the roots-rockers US Army Blues Swamp Romp.

Active for the past two decades, the US Army Blues Swamp Romp performs the traditional jazz and folk music of New Orleans to support recruiting and community volunteer service efforts, and presents concerts and clinics in public schools and universities to promote the proven benefits across childhood music participation and science, technology, engineering, and math (STEM).

Many jazz greats served in the US Army between the 1940s and 1970s. Pianist Dave Brubeck was drafted into the Army in 1942. Asked to form a band after playing at a Red Cross show, Brubeck put together the Wolfpack, the first racially integrated band in any branch of the US military; the pianist also met longtime collaborator Paul Desmond while both were in the service. Tony Bennett was drafted in 1944 and served as a rifleman in the 63rd Infantry Division (known as the "Blood and Fire Division") before being reassigned to a special services band, where he sang under his first stage name, Joe Bari.

"So many of my Army buddies did well in the music world after the war," Bennett recalled in his 1998 autobiography The Good Life (Pocket Books). "George Duly went into Les Brown's band; George Masso began his postwar career playing trombone for Jimmy Dorsey and later became a composer; Dick Dorsheck became the principal composer for the BBC Radio and Television Orchestra; Red Mitchell was for many years the leading bassist on the West Coast jazz scene; Janie Thompson, a devout Mormon, has devoted her life to music education at Brigham Young University; and Jack Elliott became a major composer of movie and television soundtracks."

While on a US Army band world tour to entertain the troops, saxophonist Joe Henderson managed to hang out in Paris with Kenny Drew and Kenny Clarke. Cannonball Adderley led a small ensemble during his US Army service. The Army drafted saxophonist and founding Weather Report member Wayne Shorter in 1956, who managed to work with Max Roach, Oscar Pettiford, and Horace Silver during his two years of military service. Drummer Elvin Jones served in the late 1940s, and drummer Steve Gadd in the late 1960s into the early '70s.

The United States Navy Band was established as the official US Navy Band in 1925. The Navy Band's jazz ensemble, The Commodores, was founded in 1969.

Trumpeter Clark Terry and saxophonist John Coltrane both served in the US Navy Band. Terry enlisted in 1942 and was assigned to the band at Great Lakes Training Station in Illinois. (During the first World War, march king John Phillip Sousa was commissioned as bandmaster of this Great Lakes Naval Base Band.) Other jazzmen who emerged from this same US Navy "Great Lakes experience" include saxophonists Von Freeman and Ernie Wilkins, composer-arranger Gerald Wilson, and trombone player Al Grey. Terry played in the Navy band until 1945 and later found stardom as featured soloist with The Tonight Show band.

John Coltrane was drafted and assigned to the Navy in 1945. 'Trane made two of his earliest jazz recordings (including "Hot House" by Dizzy Gillespie and "Koko" by Charlie Parker) as a member of a Navy band called the Melody Masters while serving in Hawaii.