One of the finest bop-oriented trombonists of the past 30 years, Bill Watrous has had a low profile since moving to Los Angeles in the 1980s despite remaining quite active. Possessor of a beautiful tone and remarkable technique, Watrous has been constantly overlooked in jazz popularity polls of the past two decades. His father was a trombonist and introduced Bill to music. He played in traditional jazz bands as a teenager and studied with Herbie Nichols while in the military. Watrous made his debut with Billy Butterfield, and was one of the trombonists in Kai Winding's groups during 1962-1967. He was a busy New York-based studio musician during the 1960s, working and recording with Quincy Jones, Maynard Ferguson, Johnny Richards, and Woody Herman; playing in the television band for Merv Griffin's show (1965-1968); and working on the staff of CBS (1967-1969)

June jazz birthdays! Our featured honoree is bassist Reggie Workman, 82 years young, who got a fine birthday present: a 2020 National Endowment for the Arts Jazz Masters Award. So, we have three tracks from his own recordings, which may surprise you. One features Andrew Hill and Julian Priester. Other birthday honors include Marcus Belgrave (Horace ...

The arranger of music scores is as important as a crankshaft in an engine. Yet many are destined to live in the shadows. Ralph Carmichael was subsumed by the luster of Stan Kenton. Arranger Paul Riser, who wrote the opening bars to “Dancing in the Street," is a virtual unknown. And then there is ...

Bill Watrous, a jazz trombonist who came up in the 1960s just as jazz was fading and the trombone was transitioning into studio orchestras and funk-soul groups such as the Jazz Crusaders and Kool and the Gang, died on July 2, 2018. He was 79. Watrous's finest work was on ballads. His singing trombone style on ... 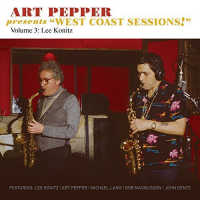 In February, I posted about two superb Art Pepper albums that have were remastered on the Omnivore label. The recordings were originally made for the Japanese Atlas label, with Pepper's featured guest as the leader so he could get around his contracts with Fantasy. One was with Pete Jolly and the other was with Sonny Stitt. ...