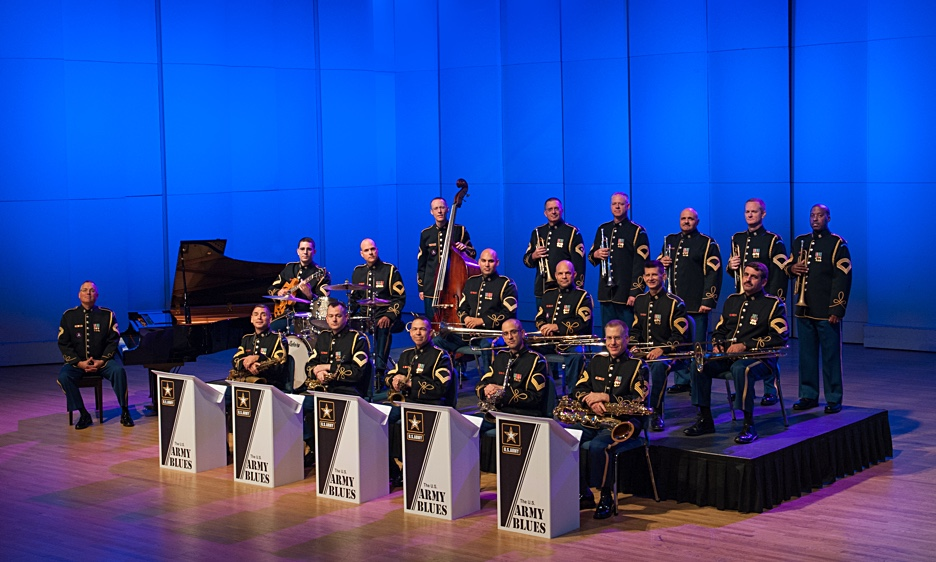 With all respect due to the US Army Blues Swamp Romp and the men who serve in it: Voodoo Boogaloo is an absolutely perfect soundtrack to a weekend full of the blues, booze, and barbeques.

Swinging in the Holidays does so much more than swing. "Five-Sided Dreidel" sings in the traditional "Dreidel" melody until saxophones unravel it like unwrapping Christmas package ribbon and then hand what's left to the drummer and guitarist. From there, guitarist SSG Michael Kramer and drummer MSG Steve Fidyk shoot off like conjoined rockets, setting off electric blue fireworks that sound like they were lifted from an Allan Holdsworth progressive rock tune. The Blues' arrangement keeps Vince Guaraldi's classic "Christmas Time is Here" foamy and warm, with tenor sax stretching notes from the melody like sweet sticky taffy across the closing instrumental verse.

"Big Bad Drummin' Dude" "borrows" the melody to "Little Drummer Boy" but updates it into the titular funk monster. After the second verse pulls a new melody out of the first, the horns seem to want to settle down and ride their groove but Fidyk's snare drum just won't stop popping off, which keeps the beat snapping and jumping.

Other tunes steer Swinging in the Holidays directly into New Orleans' party-centric heart. SGM Christal Rheams' brassy vocal leads "Christmas in New Orleans" into a sassy strut, with trumpet and tuba solos elbowing each other in and out of alignment with Regan Brough's walking bass line. "Blue Christmas" closes with the refreshing, old-time feeling of a blues parade marching (sometimes unsteadily) down Bourbon Street.

The professional Airmen-musicians in the Falconaires represent the young men and women at the United States Air Force Academy who are training to be future Air Force officers, and play a major role in cultivating America's national heritage through its only indigenous musical genre, jazz. The Long Blue Line presents their jazz reinventions of music that shaped the experience of US Air Force Academy graduates from its 1955 founding to the present.

You can barely hear its original melody but "Heartbreak Hotel" (Elvis Presley) still sounds sad and lonesome, with a glistening piano introduction by SrA Shawn Hanlon and subsequent trumpet (SrA Benjamin Sampson) and baritone saxophone (MSGT Michael Van Arsdale) solos that polish the blues into a sound which falls soft in your ear but heavy on your heart.

Interpreting its hard rock guitar hook through a single trumpet line and ensemble horn response turns "Back in Black" (AC/DC) into a coolly detached Steely Dan kind of jazz sound that swells in instrumental numbers and power. "Smells Like Teen Spirit" (Nirvana) opens in a murky electronic whirlpool then slowly unwinds the melody, with SSgt Benjamin Sampson's flugelhorn pulling so much melody and blues out of this new context that you think: It's a shame that Miles Davis didn't live long enough to pick up this tender, dignified yet blue, rearrangement.

Seriously: Nirvana, but done Birth of the Cool style.

Turning toward something funky, MSGT Tim Allums' spirited vocal throws down a full-throttle challenge to dig that "Uptown Funk" (Mark Ronson/Bruno Mars), with drummer/percussionists A1C Tyler Kennamer and MSgt Paul Shaw ripping up and tearing down the closing verses like an Afro-Cuban freight train. Pianist Hanlon and bassist MSgt Jason Crowe double up on a "Love Supreme" kind of circular bass riff to open "Thriller" (Michael Jackson), a funk monster that springs more fully to life with each passing horn chorus.

The spirits of Louis Armstrong and the city of his birth bring this 2015 set by US Army Blues Swamp Romp Back to the Bayou. It opens with the Swamp Romp rhythm section (pianist SGM Tony Nalker, drummer MSG Steve Fidyk, and bassist SFC Regan Brough) powerfully driving the ensemble through "Down by the Riverside," pulling eruptions of cacophonic New Orleans rapture from a spiritual that predates the US Civil War. Next, they slow roll "New Orleans" slow rolls into a heavy-handed blues that moves like still, breathless afternoon air under the blistering Louisiana sun.

Trumpeter MSG Graham Breedlove and female vocalist SGM Christal Rheams evocatively swap heartfelt verses in "Do You Know What It Means To Miss New Orleans," which Armstrong played and Billie Holiday sang in the 1947 feature film New Orleans. The band injects steamier funk into "Struttin' With Some BBQ," made famous by Armstrong's 1927 version with his Hot Five, but here turned inside out by SSG Michael Kramer's mid-song banjo solo.

Back to the Bayou settles in for the night in the "Lower Ninth," one of New Orleans' most famous musical districts and birthplace to such legends as Kermit Ruffins, Harold Batiste and a long line of the Batiste family musicians, and Antoine "Fats" Domino, with Breedlove's melancholy trumpet blues gracefully pulling down the shades and tucking the arrangement up tight.

Live at Blues Alley presents US Army Blues recorded live at historic Blues Alley in Washington, DC. "I can honestly say that you are seeing one of the swingingest bands in America today," Blues Alley owner Harry Schnipper said to introduce the band as they came onstage.

Their subsequent performance absolutely proves it. Blues Alley honors DC native Duke Ellington by opening with "Main Stem," an Ellington composition that Duke first recorded in 1942 as a 78-RPM single. It swings with the dexterity of a small band but the power of a large one, with tenor saxophone and trumpet solos buzzing like jitterbugging bumblebees. Their lush arrangement of Horace Silver's "Barbara," mined from Silver and Brass (1975, Blue Note), quite naturally spotlights thoughtful solo passages from pianist SGM Anthony Walker and also suggests Ellington's regal musical splendor. Walker's piano introduces the melancholy "Bayou Farewell" with the sad yet hopeful sound of saying goodbye to someone you love.

The Army Blues original "Ogoniland," based on a folk song that honors Nigeria's native Ogoni people, showcases how jazz (and jazz bands) have become much more global. Massive and deep, it begins like a regal national anthem before the rhythm section set their jazz pots to boiling and the horns begin blowing lusty and hot. The rhythm section seems to especially relish the rhythmic challenges presented by this Nigerian tune, shifting into a smooth glide that brings "Oginoland" from Africa to Washington, DC, and then into African polyphony that brings the house down.

With all respect due to the US Army Blues Swamp Romp and the men who serve in it: Voodoo Boogaloo is an absolutely perfect soundtrack to a weekend full of the blues, booze, and barbeques. MSgt Steve Fidyk's bone-rattling bass drum and tap-dancing second line snare beat team with SGM Anthony Nalker's piano boogie-woogie to keep the fire burning behind the opening "It Ain't My Fault," written by New Orleans jazz and R&B drum stalwart Smokey Johnson. Swamp Romp turns Sonny Terry's "Whoopin' Blues" into a Bo Diddley shuffle, rearranged to resemble the sound and structure of the primal rocker "Shake, Rattle & Roll" with an ensemble horn chart that sings, "Get out from that kitchen, rattle those pots and pans..."

Swamp Romp slows the traditional "Just a Closer Walk With Thee" all the way back to backcountry Sunday morning church, delivering this sonic message from a much simpler place and time with warmth and charm. But then they crank the speed on Hank Williams' bayou classic "Jambalaya" all the way up with tenor saxophone bleating out primal pre-rock R&B and banjo notes picked so bright and quick they almost glow.

Jelly Roll Morton's "Milenburg Joys" circles Voodoo Boogaloo back home to New Orleans with a warm, homespun feeling thanks to the simple but effective touch of hands clapping out its rhythm. Swamp Romp's arrangement emphasizes the off-beats and counterrhythms, twisting and shouting like a swivel-hipped masterclass on New Orleans boogie and blues.

You'll know from the very first sound of its opening "Jing, Jing, Jing" that Cool Yule is stuffed like a Christmas stocking full of lively traditional and original holiday music. The Airmen's tribute to Benny Goodman's classic stomp "Sing Sing Sing" opens like a steaming rhythmic jungle but with sleigh bells dancing in between the drumbeats; the clarinets are voiced to sound (and swing) just like Master Goodman's band, the brass section stops to sip upon "We Three Kings," "Jingle Bells" and other familiar riffs, and the rhythm section swings the entire ensemble from its very foundation. Similarly, the title track bows to honor the Andrews Sisters' swing vocal classic "Boogie Woogie Bugle Boy," complete with harmonized vocals and a lead trumpet break that soars into the upper register like a rocket shattering the atmosphere.

Other selections slow into a nice and easy groove. The opening instrumental verse to "Merry Christmas Baby" packs a heavyweight ensemble punch (think of that huge sound behind Frank Sinatra's "That's Life") to "Merry Christmas Baby," but then TSgt Paige Martin lead vocal pours out warm gutbucket rhythm and soul like a pitcher of holiday eggnog. Dean Martin first rode Sammy Cohn's happy to be sad "The Christmas Blues" into a holiday hit; in this set's update, female vocalist Martin flutters the closing sound of some words, and tumbles other words together like a shaken martini, creating bluesy but not quite blues verses that thoroughly honor Martin's original phrasing.

Cool Yule closes with the only tune that the Airmen did NOT rearrange—"Peanut Brittle Brigade March," which Duke Ellington and Billy Strayhorn wrote to replace the original stoic "March" in their jazz interpretation of Tchaikovsky's ballet Nutcracker Suite (1960, Columbia).