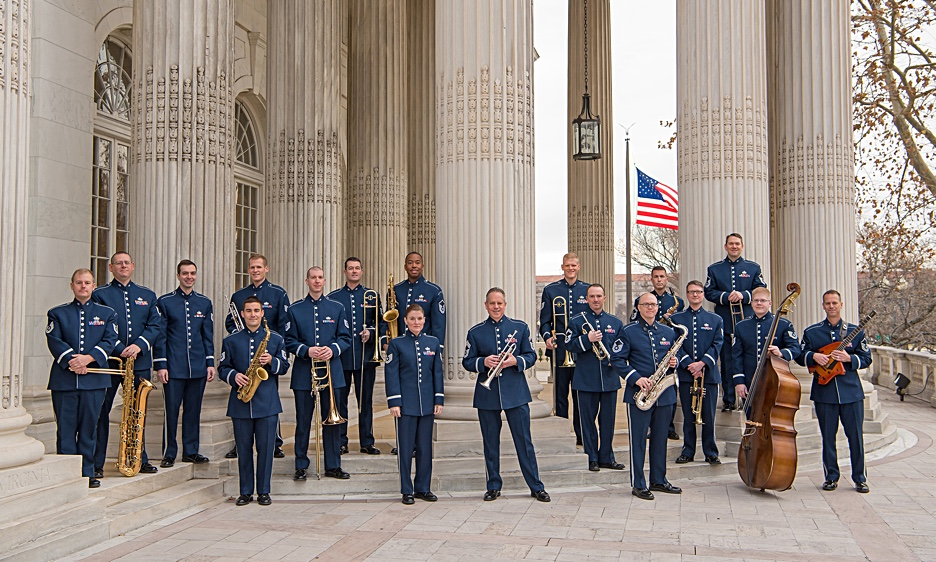 Jazz is so hard to play and we fall in love with complexity. The root of complexity is simplicity. &#151Branford Marsalis

You may be surprised to learn that one of the best big bands on the 2019 jazz circuit in made up of musicians who simultaneously serve in the US Air Force. But as you hear on their Jazz Heritage Series 2019 Radio Broadcasts with guest artists Cyrille Aimee, Kenny Barron and Branford Marsalis, or on Global Reach, their around the world survey of jazz and jazz-related tunes from 2018, the US Air Force The Airmen of Note truly shine as a beacon of big band and large ensemble jazz.

Global Reach takes on the music of Argentina, Brazil, India, Japan, Kenya and Korea, plus The Beatles, too. With neither formality or ceremony, The Airmen of Note simply tear into its opening Japanese folksong "Sakura" and the thunderous roar from the rhythm section (Technical Sargent Cameron Kayne on bass, Master Sargent David McDonald on drums, and TSgt Chris Ziemba on piano), keeps the throttle wide open throughout.

Their exercise of "Obiero" grows into a full-blown ensemble where horns rise up and stand upon each other like mountains; features a lovely lead vocal by TSgt Paige Wroble, whose own voice pulls out the birdsong qualities of the original Kenyan folksong; and slowly but surely comes to rest like a giant musical wheel slow rolling to its eventual stop. The Korean folksong "Arirang" arises like musical mist from the ensemble's exotic colors and soft shades, its flutes and horns fluttering in and out of its edges like birds sketched across the sky.

The Airmen conclude their global tour with a joyous jazz detonation of "Itsbynne Reel," co-composed by Michael Brecker and Don Grolnick, a sound tornado that features twin soprano and twin tenor saxophone battles and rampages for more than seven celebratory minutes. 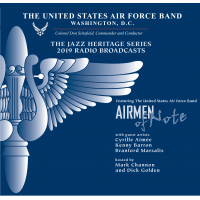 This promotional voiceover for these 2019 Radio Broadcasts explains their connection: "Like the great pioneers of the air—Billy Mitchell, Hap Arnold and Jimmy Doolittle—musical pioneers from Louis Armstrong to John Coltrane and beyond used forward thinking and innovation to shape America's music: jazz."

"We wear sort of two hats at the same time," explains Airmen of Note Music Director and lead trombonist MSGT Ben Patterson. "We're ambassadors not only for the music but for the United States Air Force and so we're going out and spreading messages for both of those things at the same time. I tend to think that one of the best uses of our tax dollars as Americans is these military bands. Fortunately, the higher-ups continue to think that spreading messages through music is a valuable thing."

Barron and Marsalis, in their own interviews, certainly agree. Right after Barron is introduced to the radio audience, he immediately says, "First of all, I'd like to say: This band is great."

Vocalist Cyrille Aimee attended college with Airmen of Note bassist TSGT Cameron Kayne and met the rest of the ensemble when they were both performing at the Detroit Jazz Festival. Born in France, Aimée's heartstrings were insistently strummed by the music of local gypsies, an influence which remains strong in her vocal style. Aimée has won both the Montreux Jazz Festival and Sarah Vaughan International jazz vocal competitions and has recorded eight albums since she arrived through a musical scholarship in the US.

The Airmen of Note open the Cyrille Aimée broadcast with their interpretation of "Visions" (Stevie Wonder) and an incendiary Latin take on "Take It to the Ozone" from Freddie Hubbard's landmark Super Blue (1978, Mosaic). They open "Ya Gotta Try" as a swinging piano trio before the horns sweep in and out like the ocean tide, all in the style and sound (and power) of a classic Count Basie jump blues.

On this Radio Broadcast, the longer Aimée sings, the more her vocals swing. In "September in the Rain," the control, elasticity and articulation of her improvised vocal are remarkably musical and set the path for the ensemble horn choruses which follow. "I recorded this song first for a live album, Live at Small's, and I took a vocal solo, I improvised," she explains. "And then the director of the Chicago Jazz Orchestra transcribed my solo and turned it into a soli for a big band, so that's what you're going to hear tonight."

Aimée and the Airmen meet the challenge of "Long as You're Living," swinging big-band music so swivel-hipped and sharp that it even sounds like it was written by three bop-era horn players (Julian Priester, Tommy Turrentine and Clifford Brown).

Aimée virtually prowls like a playful feline into her lovely performance of "What A Little Moonlight Can Do," lilting and floating where the music calls, and ripping it up and tearing it down when the music calls for that, too. The light air and sophistication of the closing "Cheek to Cheek" also seems to fit Aimée's voice like a soft and supple satin glove, as she elegantly glides through the first few verses, but stretches out like a glorious lioness to close.

The Airmen of Note open the Kenny Barron performance with their full steam ahead voyage through Sammy Nestico's "Ya Gotta Try," a favorite of Count Basie as well as of Frank Sinatra's favorite drummer, Buddy Rich.

Barron steps out with his original "Golden Lotus," an exotic masterpiece of rhythm and sound that spreads a colorful blanket from which the Airmen of Note horn soloists conjure up wonderfully Eastern sounds. But he shifts quickly into his "NY Attitude," which rockets out of its start and features MSG Ben Patterson ripping and roaring through his trombone solo; Patterson's frantic energy seems to inspire Barron, who powers through his own blues riffs like a ravenous jackhammer and scrambles in several directions at once. "The title kind of speaks for itself, if you've ever lived in New York," Barron suggests. "Or if you've ever driven a car in New York."

Barron and the Airmen arrange "You Don't Know What Love Is" as a gorgeous blues in feeling but not in structure, with the pianist ruminating over his notes like a lover lost in reverie, a deep and intimate blues feeling that also beams from the ensemble's accompaniment. Barron then dives into a masterful solo passage full of complex music but basic emotion, until the woodwinds and brass return to lead the piano into the still of the night.

"Voyage," another Barron composition, ventures into more up-tempo and dynamic jazz. This walking bass line quickly breaks into a gallop that provides the launchpad for tenor sax and electric guitar solos that overflow with the joy of spontaneous ensemble creation; bonus kudos to drummer MSgt David McDonald, who keeps dropping bombs to keep this beat jumping.

Like their performances with Aimée and Barron, the Airmen of Note open their Branford Marsalis radio broadcast with a hot, high and hard-charging instrumental, this time the traditional Japanese folk song "Sakura."

Marsalis' tenor in John Coltrane's "Syeeda's Song Flute" seems to lean but not bend in the composer's direction. Marsalis' playing sounds sinewy and strong, a dashing jazz figure draped in the ensemble's fine orchestral threads even while stretching the limits of the music and his instrument. Pianist TSG Chris Zlemba starts his solo in mainstream jazz but quickly takes it to other more far-off and far-out places, igniting a drum solo that calls the big band back together into momentous swing. Marsalis brings a much more lugubrious sound and feeling, plus shades and highlights from the Orient, to Wayne Shorter's "Infant Eyes."

"The Mixup" slows the tempo down into a cool simmer, with Marsalis gliding swivel-hipped like the coolest of cats on top of the first section's Horace Silver style funky piano blues, and blasting through the second section with bursts of staccato blues. Marsalis and the Airmen stretch out even more into "The Night Has a Thousand Eyes," sounding like they're having a thoroughly wonderful time as they explore every crack, corner and crevice in the rhythm section's swinging tempo and glorious horn blast.

"Jazz is so hard to play and we fall in love with complexity. The root of complexity is simplicity," Marsalis thoughtfully suggests in his Radio Broadcasts interview. "We don't spend enough time dealing with simplicity so then we double down on complexity, and the music becomes more and more detached from a regular audience— because of our inability to play simple things."

Airmen of Note with Cyrille Aimée

Airmen of Note with Kenny Barron

Airmen of Note with Branford Marsalis