Don Grolnick was a subtle and rather underrated pianist throughout his career, but his flexibility and talents were well known to his fellow musicians. Grolnick played in rock bands while a teenager but was always interested in jazz. He worked in the early fusion group Dreams (1969-1971), the Brecker Brothers (starting in 1975), and in the early '80s with Steps Ahead. He has long been a busy session musician often utilized by pop singers. In the 1980s, Grolnick appeared in many settings including with Joe Farrell, George Benson, Peter Erskine, David Sanborn, John Scofield, Mike Stern and the Bob Mintzer big band 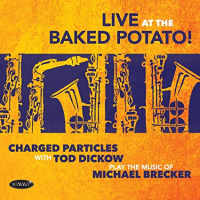 The late tenor saxophonist Michael Brecker was held in the highest regard by fellow saxophonists, while at the same time being seen as far too eclectic to be part of the jazz pantheon (due in no small part to his sideman work in rock and pop). This album focuses on Brecker as composer, spanning three decades ...

The following is an excerpt from Chapter 8, “Going Solo, The Pittbull and The EWI" from Bill Milkowski's Ode to a Tenor Titan: The Life and Times and Music of Michael Brecker (Backbeat Books, 2022). By early 1986, Michael began formulating plans for his long-overdue solo debut. He was 37, a universally respected ...

This article was originally published at All About Jazz in November 1999. Michael Brecker's contributions to music are generous and, like the pregnant ideas that flow from his tenor horn, they continue to grow. At 50, the saxophonist has found acceptance in a wide variety of musical settings, having performed with pop stars like ...

Free Association is a series of collaborative mixtapes curated by Mondo Jazz in association with musicians and selectors of various origins. Free Association mixtapes develop as a conversation. The first selector sends a tune cherry-picked to suit, and ideally surprise, the second selector who then, in turn, returns the favor. ...

Part 1 | Part 2 | Part 3 You may be surprised to learn that one of the best big bands on the 2019 jazz circuit in made up of musicians who simultaneously serve in the US Air Force. But as you hear on their Jazz Heritage Series 2019 Radio Broadcasts with guest artists ...