Born in Durham, N.C., Grady Tate began singing at age four and he began playing drums at age five. For the past three decades his distinctive sound has graced literally hundreds of recordings with world-renowned artists such as Quincy Jones, Jimmy Smith, Lionel Hampton, Stan Getz, Pearl Bailey, Tony Bennett, Ella Fitzgerald, Aretha Franklin, Lena Horne, Peggy Lee, Della Reese, Sarah Vaughan, Michael LeGrand, Lalo Schrifin, and Andre Previn. He graduated from North Carolina Central University with a degree in English literature/drama and a minor in Psychology. He taught English and Speech in Washington, DC, but his desire to pursue an acting career lead him to New York City and the American Academy of Dramatic Arts. Once in New York, however, his reputation as an outstanding musician resulted in work with Quincy Jones.

Singing is also a natural talent of Mr. Tate. After the legendary Peggy Lee heard him sing and introduced him as a part of her show, his musical dimension expanded radically. He has been described as "the best singer to emerge from the ranks of instrumentalists since Nat Cole." His most recent CDs as a vocalist are TNT-Grady Tate Sings and Body and Soul (Milestone). Mr. Tate received two Grammy nominations as "Best Male Pop Vocalist" (1973 and 1989). The Manhattan Association of Cabaret Singers recognized him as "Outstanding Male Jazz/Blues Vocalist." Mr. Tate performed six years as drummer for Johnny Carson's Tonight Show. He served as assistant conductor and drummer for Broadway shows Lena Horne, The Lady and Her Music, and Black and Blue. Mr. Tate has been on the Howard University faculty since 1989.

Grady Tate; Jammin' On The Hudson

Jazz by the Riverside with Grady Tate

From the Heart: Songs... 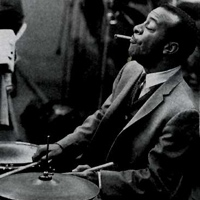 All About Jazz musician pages are maintained by musicians, publicists and trusted members like you. Interested? Tell us why you would like to improve the Grady Tate musician page.