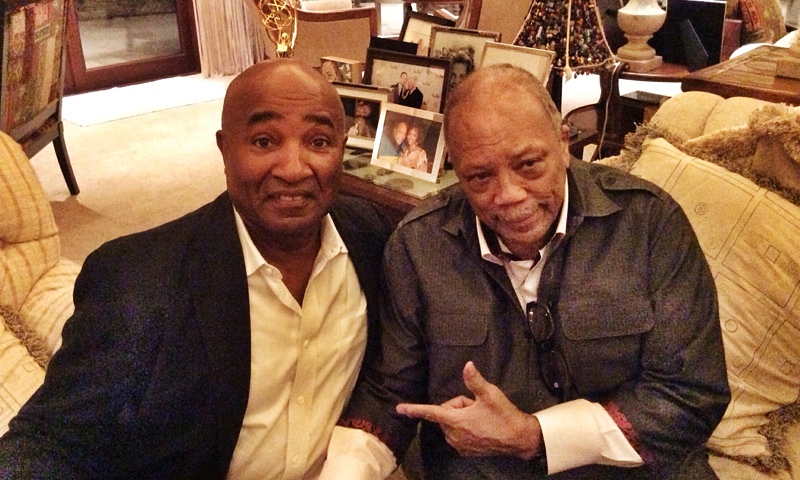 The industry doesn’t change your production - you still do what you believe in.
—Quincy Jones

I love jazz! I love everything about it... the improvisation, syncopation, the forceful rhythm, and the fact that it is truly America's original art form. Its unique and innovative use of brass and woodwind instruments and the piano is jazz. And, it is as American as apple pie.

Ask 100 different people "What is jazz?" and you're likely to get 100 different answers. Its styles include Dixieland, swing, bebop, and free jazz. Jazz is America's classical music. It migrated from the early days of ragtime, and onward through swing, bop, and progressive jazz.

Jazz music has its roots in the the African-American slavery experience (the black ghettos of New Orleans at the end of the 19th century). Jazz from New Orleans in the 1920s up river to St. Louis, then to Chicago (Quincy's early teen home) and New York City as African Americans migrated north in search of a better life.

About one month ago today I had the privilege of taking a meeting with the legendary Quincy Jones ("Quincy," or "Q" as his friends refer to him). Few know the evolution of jazz like Quincy. He would object to the adjective "legendary" description because as he said, "it makes him sound old."

Trust me, Q is a living testament to the fact that chronological age is just a number. There is nothing old about Quincy Jones, especially his music. The man is the source of boundless intelligence, focus, and proactivity... and a great Daddy.

When Quincy Jones speaks, one would be wise to listen... which I was more than eager to do. He combines academic research with a wealth of personal knowledge of the music and shared many fascinating anecdotes about the great artists of jazz.

Quincy is uniquely qualified to answer questions about great artists like: Charlie Parker, Miles Davis, Frank Sinatra, Count Basie, Lesley Gore, Michael Jackson, Peggy Lee, Ray Charles, Paul Simon, and Aretha Franklin... all (except Parker) are among the endless list of artists who Quincy has produced. Of the beboppers who emerged after World War II only Miles Davis and Quincy Jones survived as major musical presences.

While waiting in Quincy's screening room and library for our meeting to start, I was impressed by the over 25 Grammys that I saw. That is more than any other music producer in history. He's been nominated for seven Academy Awards, and has worked tirelessly shaping and reshaping American popular culture for most of his 81 years.... And, as Quincy would say, "the best is yet to come."

Did I say HOT ROCKS! Quincy Jones delivered a sultry jazz score and LP to one of the best caper films ever made. This score, one of the first Jazz scores for a major motion picture, has been endlessly sampled for four decades, and it's not hard to see why -his band consisted of: Clark Terry, Gerry Mulligan, Grady Tate, and Ray Brown.

As I studied another of Quincy's walls of great achievements, I saw movie posters from In The Heat Of The Night; The Out Of Towners; Cactus Flower; In Cold Blood; and The Color Purple. They are bold evidence that he has worked with as many great actors, directors, and producers as he has musicians.

The posters transported me back to a movie that I produced some years ago, The Grass Harp, that featured script writer Stirling Siliphant (In the Heat of the Night); based on a Truman Capote novel (In Cold Blood), with Jack Lemmon (The Out of Towners) and Walter Matthau (Cactus Flower) the lead actors. This, and my to momentous meetings with Kathy Kennedy (The Color Purple)... the music man Quincy Jones worked with them all.

My colleague exclaimed, "he has worked with everyone!" At that moment, this seemed to be true. So, I started to look around for the posters of Quincy working with: Jesus; Mohammed; Gautama Buddha; Krishna; Confucius; and Moses. And, while there were none to be found, I didn't see the rest of the house.

I left the library to meet Quincy Jones... and he looked great! A proud father, he sat gently on a comfortable sofa, in a well appointed living room surrounded by photos of the loves of his life... especially his children... and evidence of the amazing music that this very energetic man produced. He looked up to greet me and my colleagues with a knowing look that puts you instantly at ease.

He spoke in a soft but firm voice, that Quincy voice, the kind that comes with the deep self-confidence of being on purpose, as he recounted amazing events and stories that ranged from Miles' return from self-imposed retirement at Montrose, to organizing the production team for The Color Purple, to organizing and producing the "We Are The World" recording sessions with Michael Jackson and Lionel Richie.

Among the scores of topics that Quincy nimbly and enthusiastically danced through in machine gun fashion during our 3.5 hour meeting was his then soon to be released documentary, Keep On Keepin' On, the Clark Terry story. "It's beyond music, it's about humanity," Jones said. "I love it because I've never seen so much truth in my life in a film, ever."

Produced by and co-starring Jones, the film charts the life-altering friendship of 93-year-old jazz trumpet icon Clark Terry and 23-year-old blind piano prodigy Justin Kauflin. The pair first met at William Paterson University in Wayne, where Kauflin was a student and Terry was a longtime faculty member and permanent artist-in-residence.

Terry was born in St. Louis, Missouri. He attended Vashon High School and began his professional career in the early 1940s, playing in local clubs. He served as a bandsman in the United States Navy during World War II.

Terry's years with Basie and Ellington in the late 1940s and 1950s established him as a world-class jazz artist. Blending the St. Louis tone with contemporary styles, Terry's sound influenced a generation. Among those influenced were Miles Davis and of course Quincy Jones (both of whom acknowledged Clark's influence during the early stages of their careers).

The film marks the directorial debut of Australian native Alan Hicks, who also studied under Terry at the university and played drums with the legend in his storied small group ensemble at the school.

As amazing as the documentary is, I wasn't there to meet with Quincy about Keep on Keeping On, I was there to talk about another project that is near and dear to his heart, music piracy. Quincy wants to produce a movie that deals with the truth about how piracy affects artists and the music industry in general.

What is music piracy? Simply put, it is the copying and distributing of copies of a piece of music for which the composer, recording artist, or copyright-holding record company did not give consent. It has a long history, as Beethoven was afflicted with pirated copies of his music, which reduced the income he could make from publishing. Quincy put it even more simply, "piracy is stealing music."

I asked Quincy how he's adapted to the way the music business has changed. He responded, "The industry doesn't change your production -you still do what you believe in. What's sad is that there is 98 percent music piracy everywhere on the planet. It's just terrible. What if these kids (who download music illegally) worked for me for two months and then I said, "I'm not going to pay you." "That's just not right."

Music theft is real, it is an ongoing and evolving challenge. Both the volume of music acquired illegally without paying for it and the resulting drop in revenues are staggering. Digital sales, while on the rise, are not making up the difference.

Here is an example the Recording Industry Association of America gives of Online Copyright Infringement:

You make an MP3 copy of a song because the CD you bought expressly permits you to do so. But then you put your MP3 copy on the Internet, using a file-sharing network, so that millions of other people can download it. Even if you don't illegally offer recordings to others, you join a file-sharing network and download unauthorized copies of all the copyrighted music you want for free from the computers of other network members.

FAST FORWARD: Armed with a deeper understanding of the devastating affects of music piracy in mind, the evening of sharing music, wine, and laughter ended. As I walked to my car I couldn't help but think that I was in the presence of greatness. It was not the kind of unattainable greatness; but, rather the kind of greatness that comes from being on purpose, and in love with one's work... and, then I thought, what if music piracy caused artists to stop making music? What if the music stopped!?

There have been few who have contributed as much to music as Quincy Jones; but, I can't imagine anyone being more comfortable doing it. In many regards, that is the way my evening with Quincy was... he's comfortable doing what he does that he makes you feel comfortable too. Except, the thought of the potential consequence of music piracy is unsettling.

I drove home, autographed biography of Quincy Jones as a passenger to remind me that the evening was real, knowing that I had developed enthusiastic inspiration and a new friend.