At one time tagged as the hardest working bass player in America, Chuck Rainey's bass playing on successful television shows, motion pictures and recordings illustrate his well-known and legendary style, feel and concept for the instrument and it's role in organized music. His unique bass lines accent numerous commercials and are an integral part of today's music across many music viewing and listening fronts.

Born in Cleveland, Ohio as Charles Walter Rainey III, Chuck boasts a native 'son ship' of Youngstown, Ohio, where he was actually raised and educated. Originally trained in the classics as a trumpet player by C.F. Brown, James Ramsey and John Busch, Chuck switched to Baritone Horn while attending Lane college in Jackson, Tennessee and was an intricate part of the schools well known and traveled 'brass ensemble' in the early 60's.

Learning to play the guitar while on military active duty before college, eventually led him to professionally play the guitar with local bands in Youngstown and Cleveland after returning home from college and military obligations. Since his formal training did not encompass improvisational skills, his guitar playing ability was limited to 'rhythm playing.' He began to play the 'electric' bass instrument after it was obvious that his skills were more valuable playing single note patterns, which he displayed as a guitar player.

His arrival in New York City during the spring of 1962 coincided with the beginning of a new era in American commercial music. After a 3 and a half-year stint with legendary FT. Worth sax man King Curtis in New York, Chuck began an illustrious career as a 'sideman' in the recording studio along with Bernard Purdy, Eric Gale, Richard T., Donny Hathaway, Paul Griffen and Herb Lavelle to name a few. Without any argument, he is the most recorded bass player in the history of recorded music and is the most imitated by bass players as a whole.

During the period 1963 thru 1971, Chuck toured and/or recorded with some of the most prominent artist of that era. They include King Curtis, Sam Cooke, Etta James, The original Coasters, Jackie Wilson, Harry Bellefonte, Al Kooper, The Supremes, Labelle, Aretha Franklin, Roberta Flack and Quincy Jones. Of special note; As a member of 'The King Curtis All Stars', the second Beatle Tour of the US took him to Los Angeles where he made a commitment to return as soon as the Universe saw fit.

Moving in 1972 from New York to Los Angeles as a member of Quincy Jones big band, his career as a studio musician continued to grow. Additionally, his unique style brought him opportunities in the television and film industries where he can be heard performing on musical themes and in the source music of numerous motion pictures, television series and sitcoms, along with radio and TV advertisements. he also has composer, arranger and production credits in his career.

A recipient of a grant from The Ohio Arts Council in 1981, Chuck joins the group of a selected few 'music sidemen' who have been a recipient of prestigious awards. They include; 17 platinum or gold records, The Dean Markely 'Life Time Of Achievement' Award, Bass Player Magazine/New York Bass Collective 'Life Time achievement' Award, a record 35 year consecutive placement in the top 10 music poll (category - bass) in Downbeat and Playboy Magazines and the list goes on.

Thanks in part to a brilliant conceptual nature of his musicianship, he made important contributions to the success of pop, rock, jazz fusion and rhythm & blues during the 60s', 70's and 80's. As the 21st century begins, Chuck Rainey is still very much in his conceptual playing ability and performance throughout the worlds music community.

Chuck Rainey's music activities in education reach far out into the world's organized music communities. As music education is a vital part of his playing career and experience, his textbooks and educational video's are tools used by many educators in the curriculums of their local institutions. Self reliant students are also attracted to his learning tools.

Having written and taught the first bass course curriculums for The Musicians Institute/B.I.T. and Dick Grove Music Works Shops, Adds to his experience in the field of music education. He was among the first celebrated musicians to write teaching columns in Guitar Player and Bass Player Magazines in the 70's. His early monthly columns alongside the crew of that time, set the format of success inherited by columnist writing the same columns today.

The 'Rock and Roll Hall Of Fame' yearly inducts the legends of Rock music. As of 2003, Chuck Rainey's bass lines and rhythm influence are the documented backbone of the original hit recordings of the following artist and the year they were inducted: Aretha Franklin (1987), Marvin Gaye (1988), The Jackson 5 (1997), The Rascals (2000), Steely Dan (2001). Show less 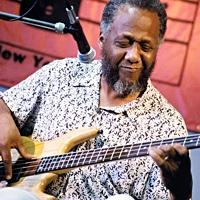 All About Jazz musician pages are maintained by musicians, publicists and trusted members like you. Interested? Tell us why you would like to improve the Chuck Rainey musician page.