Jerome Richardson's ability to double on a number of instruments in the reed/woodwind family kept him in steady employment for half a century. A first-call reed player in New York and Hollywood, Richardson's work on saxophones and flute have enhanced literally thousands of recording sessions. Always a very valuable musician to have on a session, he excelled on tenor, alto, flute, baritone, and soprano, as if each one were his main instrument. He tended to be underrated or passed over because he was a studio musician who was often mostly in the ensembles, but Richardson was a fine soloist too.

Jerome started on alto saxophone at the age of eight. In his teens Benny Carter, Johnny Hodges and Willie Smith were his ideals. He became a professional at the age of fourteen, and had a brief stint then with Lionel Hampton, and worked with Bay Area bands until 1941, during which time he also studied music at San Francisco State College. The flute was added to his working equipment in 1940. Both this and his alto sax were used to advantage in a Navy band, under the direction of Marshall Royal, at St. Mary's Pre-Flight from 1942 to 1945. He joined the Lionel Hampton band again in 1949, with whom he recorded what is widely regarded as the first modern jazz solo played on flute on ‘Kingfish’, and was also a member of the Earl Hines big band.

Richardson settled in New York in 1954, where he began a very active session career, but continued to make his mark in a purely jazz context. He worked with bands led by Lucky Millinder and Cootie Williams, and led his own quartet at the famous Minton’s Playhouse in Harlem in 1955. Richardson was heard at the Cafe Bohemia in the summer of 1955 with Oscar Pettiford's group. Starting in October of that year, Jerome fronted his own quartet at Minton's with a very fine rhythm section of Hank Jones, Wendell Marshall and Shadow Wilson. In December he started working in the pit orchestra at the Roxy and doubled between the club and that theater. The job at Minton's ended on January 1, 1956 but Jerome stayed on at the Roxy until February of 1958.

He worked regularly with band leader and arranger Quincy Jones, including a European tour with Harold Arlen’s blues opera Free and Easy in 1959, and was also involved in many of Jones’s more pop-oriented projects.

His standing as a superbly accomplished soloist on a range of reed and wind instruments was complemented by an equally strong reputation as an accompanist of singers, including the likes of Ella Fitzgerald, Frank Sinatra, Sarah Vaughan, Billie Holiday, Peggy Lee, Nancy Wilson, Billy Eckstine, and Lena Horne.

He moved to Los Angeles for a time in the mid-1970s, working mainly in the studios, but returned to New York in the late 1980s, where he worked on Broadway musicals, and performed with artists like trumpeter Art Farmer, saxophonist Clifford Jordan and trombonist Slide Hampton, as well as leading his own group, in which he played mainly alto saxophone, his instrument of choice in recent years.

Richardson did not lead many recording dates in his career but he headed two for New Jazz, (then Prestige) during 1958-1959. “Midnight Oil,” has Richardson mostly on flute, forming an unusual front line with trombonist Jimmy Cleveland. They are joined by a four-piece rhythm section with pianist Hank Jones and guitarist Kenny Burrell, performing cool-toned bop. “Roamin’ with Richardson,” is a quartet outing with pianist Richard Wyands, bassist George Tucker, and drummer Charlie Persip. The leader plays baritone on three songs, two on tenor, and one on flute, swinging on each of his horns. He also put out; “Going to the Movies with Jerome Richardson," on United Artists and one of the very first jazz-rock records ever made on Verve called "The Groove Merchant."

Though this selection as leader may seem sparse, he was probably one of the most recorded saxophonists of his generation. Show less

Going To The Movies 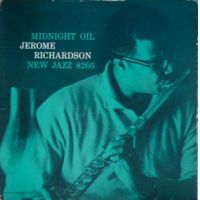 All About Jazz musician pages are maintained by musicians, publicists and trusted members like you. Interested? Tell us why you would like to improve the Jerome Richardson musician page.