Less formal than our standard interviews with a focus on an artist's recent recording project or tour. 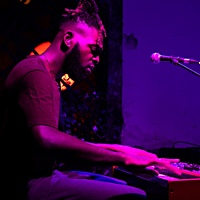 Pianist and composer Ashley Henry is one of the most interesting talents coming out of the British Jazz scene, which has been commanding growing international recognition. His debut album Beautiful Vinyl Hunter (Universal, 2019) revealed a universe in which grime, r&b and hip-hop coexist with the respect and recognition for the great jazz players of the past. Raised in South-East jny: London amid Afro-Caribbean rhythms and records by Stevie Wonder, Prince and Marvin Gaye, graduated in Jazz Music ...

Polish saxophonist Sylwester Ostrowski is not only a brilliant musician and producer, but an equally successful cultural promoter. In particular, he is the founder and organizer of the Szczecin Jazz Festival, a celebrated festival he organizes in his native city. As soon as he hit the road after the hiatus forced by the pandemic, we had the opportunity to meet him and talk about his very special projects, dreams and worldviews. All About Jazz: After a long, trying ...

Bobby West, jazz pianist, international performer, and composer, has split his professional career between Los Angeles, California and since 1993, living and performing abroad. He has successfully managed a transition to have residence and perform in Asia, the Middle East and Europe over the last 30 years. He is currently residing in Taiwan and playing in a variety of jazz clubs in the capital of Taipei, including the Blue Note Taipei and Yuppy's Bookstore. His debut release Leimert ...

Saxophonist Immanuel Wilkins, in the midst of celebrating the success of his debut album Omega (Blue Note, 2020), appeared at the 2021 Newport Jazz Festival as the leader of his own band. With his band of four years, Micah Thomas on piano, bassist Daryl Johns and drummer Kweku Sumbry, Wilkins performed pieces from Omega as well as songs previously unrecorded. Besides leading his own band, Wilkins has been an in demand sideman to such artists as Gretchen Parlato, Joel Ross, ...

From the 1995-2003 archive: This article first appeared at All About Jazz in June 2002. All About Jazz: You were born in Greenwood, Mississippi, and grew up listening to blues, gospel and R&B music. What attracted you to jazz? Mulgrew Miller: The thing that pulled me toward jazz was jazz itself. By the time I really discovered what jazz was all about, I'd been playing rhythm and blues-mostly for dances. And I'd played gospel music in ...

From the 1995-2003 archive: This article first appeared at All About Jazz in October 1999. Willie Nelson is a man of the people. In a single night (the night of this interview), I witnessed Willie sign more autographs and shake more hands (genuinely) than Al Gore has through his entire two terms as Vice President. Willie's legions of fans are very loyal to him and he strives to honor each and every one of them. Warren Beatty? Donald ...

An un-planned flight from peak Covid spread in New York City in March 2020, led jazz saxophonist and composer Jon Irabagon to escape to in-laws located next to the Black Hills National Forest in South Dakota. Winner of the 2008 Thelonious Monk Competition and named “Musician of the Year" in 2012 by The New York City Jazz Record, Irabagon has been noted for his “extraordinary eclecticism" as referenced in a 2019 article by Jazz Times critic Thomas Conrad. Irabagon has ...