When I really decided that I wanted to play drums it was because I heard 'Cherokee' by Clifford Brown and Max Roach and I heard how [melodically] drums can be played.

Drumming great Al Foster has spent nearly a half-century playing with some of the greatest musicians, and on some of the most memorable albums, in jazz history, from Miles Davis' On The Corner and Agharta to Joe Henderson's State of the Tenor and the collaborative group Scolohofo (with John Scofield, Joe Lovano and Dave Holland). Today Foster records and tours the world with his own quartet, last year releasing Love, Peace And Jazz!, recorded live at Village Vanguard. During a tour stop in Italy he shared his thoughts on the music's past and present.

All About Jazz: When you were starting out, what drummers' styles made you decide "This is what I want to do?"

Al Foster: When I really decided that I wanted to play drums it was because I heard "Cherokee" by Clifford Brown and Max Roach and I heard how [melodically] drums can be played. When I was ten, my father bought me a set of drums for Christmas. I played maybe six months and I didn't play again until I was close to 13, when I heard "Cherokee." That's what made me start practicing every day.

AAJ: When did you make your first appearance on record?

AAJ: And did you have any formal musical training?

AAJ: There had to be a good deal of respect and trust from the other musicians for them to keep hiring you.

AF: You know, at that time, before fusion and all the super-technical things in music, I was able to hear the AABA form. You know, bebop... Anyway, it was easier to hear for a drummer without reading... Art Blakey didn't read, Buddy Rich didn't read. Most of the drummers didn't read. But you know the music was more about feeling and as far as I'm concerned it's the hippest music goin' on today. Walking this planet in those days with Thelonious Monk, Bud Powell, Miles... Jesus Christ, man!

AAJ: Did you have any favorite musicians you liked to work with? And from whom did you learn the most about the music?

AF: I would say in the beginning it was Sonny Rollins. I started buying Max's albums and Sonny was on most of those. Then I started buying Sonny's records and through that I was able to hear, especially [on] standard tunes, that it's the same melody goin' on, just with the chords. And I was able to hear it and I figured it out for myself, mainly because of Sonny Rollins.

AAJ: You played with Miles Davis before and after his hiatus [Foster worked with the trumpeter from 1972-76 and then again intermittently from 1981 until Davis' death in 1991]. Was there any noticeable change in Miles' approach when he came back or was it basically that he picked up where he left off?

AF: I never cared for what I did with him in the '70s. I was a jazz drummer and I thought when he asked me to join the band I thought it was jazz. But who's gonna turn down a job with Miles Davis? He told me to check out Sly Stone, Jimi Hendrix, James Brown. So I started buying some of those records just to practice on 'em. But Miles was still playing jazz. I could hear him, playing what he played on "Tune Up."

I'll tell you a quick story about Miles. When I was 16 me and a couple of other drummers went down to Birdland. I said "Man, I'm gonna take [the album] Milestones to get Philly [Joe Jones]'s autograph. But we all saw Art Blakey pick Miles up like a baby and carry him backstage. I said "Man, I'm gonna get Miles' autograph!" So I went to the door and waited for him to come out. And when he came out I said "Can I have your autograph?" And Miles told me "Get outta here! Leave me alone!" And I just stood there and tears started runnin' down my face. And my boys ran over and they started laughin' at me.

I told him about it [later] but he didn't remember it. Whenever he refused an autograph with people, I'd hit him with my elbow [and say] "Come on, Miles" and he would sign the autograph for that person 'cause I didn't want them to feel what I felt then at such a young age. But you know...he was a beautiful human being, nothing like his image. Basically he was a warm, soft person. 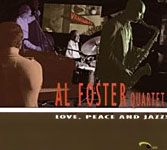 AAJ: Jazz, like anything viable, builds on itself. So now you, as a leader, are helping to keep it going.

AF: Well that's kind of true but it's hard for me to find musicians that play [lyrically], that tell a story the way Sonny and Trane [did]. I mean, as out as Trane could play he still told you a story. Ornette [Coleman] still told you a story, as out as that music was. That's what I'm looking for and I don't really hear it too much in [young players]. Piano players are pretty cool; it's the saxophone players I think I have the most problem with. I can hear the notes but to me the notes are really not telling me a story and I don't feel it.

AAJ: Well, you have a pretty good saxophonist right now with Eli Degibri.

AF: Yeah, he's cool. He's learning from me about spoiling the bandleader: if you want the gig give the bandleader what he wants so he'll call you again!

AAJ: A lot of younger jazz fans are under the impression that jazz stopped from around the time Coltrane died until the ascension of Wynton Marsalis.

AF: Wynton definitely opened jazz up when he hit the scene. I'm a Miles and Freddie Hubbard freak but [Wynton] definitely did a lot and he still does a lot for jazz with the young kids. We need people like that. I'm from another generation. He's a good musician and most of the young guys are really good musicians, but those great Blue Note records from the '50s and '60s, how can you top that stuff?

AF: Thank you, brother! Thank you!