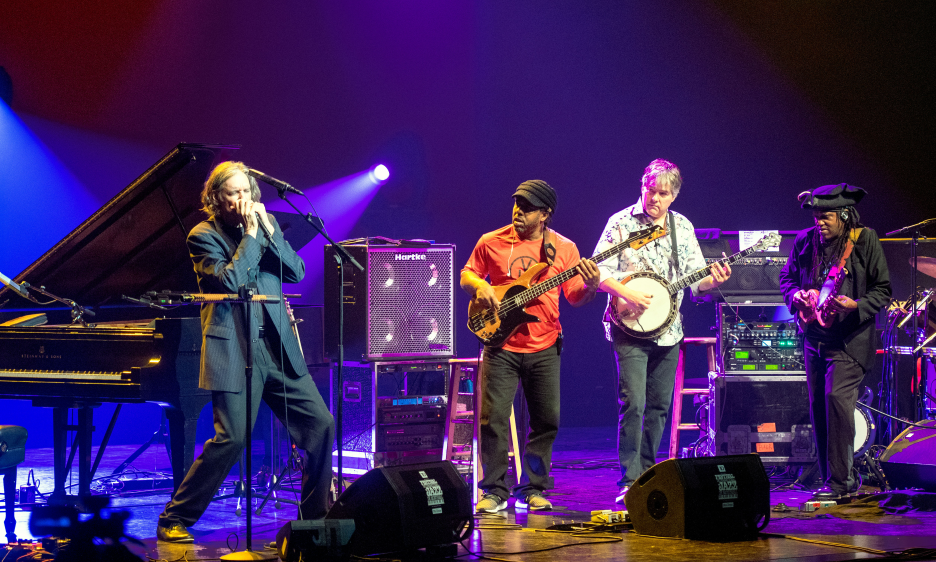 Every return to Montréal for the city's annual Festival International de Jazz de Montréal is much-anticipated. Closing off six square blocks in the downtown core is rare enough; but, over the past 39 years since the festival's first edition in 1980, the program has grown to the point where it's a serious challenge to choose what to see, especially when limited to just one show per evening. There are literally hundreds of shows presented every year, ranging from ticketed events in a bevy of superb indoor venues (all within easy walking distance), accommodating from a few hundred people to over three thousand, to free concerts on seven outdoor stages that draw anywhere from a few hundred people to, some years, as many as a quarter of a million for FIJM's Grand Spectacle performances.

Many jazz festivals having to come to the realization, over the past decade or so, that in order to continue to survive they must program not just jazz (even if it's still their primary focus), but music either tangentially related or, in some cases, bearing no connection at all. FIJM has always been a broader-reaching festival, with more than enough jazz in any day's program to justify its name, to blues, soul, rock, pop and world music: truly, almost anything that the programming team thinks would be a good fit.

As with any festival, some years are better than others, and FIJM, amongst the world's largest jazz festivals (if not the largest) has been forced to face many of the same challenges that others do, in particular Canadian festivals that have to deal with artists whose contracts demand, irrespective of where they originate, payment in American dollars. Fluctuating, in recent years, from near-parity with the Canadian dollar to variances as wide as 35% (currently it's about 25), that alone has been enough to sink at least one Canadian festival in the past decade. For a festival like FIJM, which sees as many as 2.5 million people enter its grounds over its ten-day run, its very size and international reach, with many of its regular attendees coming from around the world, definitely helps it secure private support that dovetails with federal arts funding and, in particular, provincial support in Québec that far exceeds any other Canadian province.

Still, every year remains a challenge, and while its impact is rarely felt, those who've attended it for many years have seen changes ranging from shortening the festival from a peak twelve days to its current ten to fewer tickets being made available to the hundreds of journalists and photographers who come from the USA and farther afield to cover FIJM. Still, these changes have not only allowed the festival to continue, but to do so in the big way that has defined the festival, especially since the '90s.

And, truly, nobody does big the way FIJM does. With tens of thousands (sometimes hundreds of thousands) of people on the festival grounds on any given night, all the essential services are there, from ensuring proper ingress/egress to security and medical services, though the latter two remain largely invisible unless they are actually needed.

The festival staff—from paid annual employees to its many volunteers—keep everything running like clockwork, also ensuring the grounds remain remarkably clean. Within a couple of hours of the last outdoor show of the evening, the streets look as clean as they were before people began coming through its numerous entry points. Even more so, after the final night's Grand Spectacle, it's a remarkable thing to witness how, by early morning, the stages are torn down and the streets reopened to traffic, with almost no sign of the festival's existence beyond the outdoor promenade, built for FIJM's 30th anniversary, that remains in use all year around.

Each year, the festival delivers a number of awards that reflect its open mind and broad preview. Amongst this year's awardees were: blues rocker George Thorogood, recipient of the B.B. King Award; Indian percussion master Zakir Hussain, awarded the António Carlos Jobim Award; Béla Fleck and the Flecktones, which has collectively won the particularly prestigious Miles Davis Award; pianist Renee Rosnes, who has been recognized with the Oscar Peterson Award; and Ben Harper, this year's winner of the Ella Fitzgerald Award.

But it's the Montréal Jazz Festival Spirit Award which best represents FIJM's expansive reach, presented to artists of any discipline who, as per the festival program, "underline a popular artist's extraordinary contribution to the musical world."

And so, it was particularly serendipitous that the first show covered for FIJM 2018 was Ry Cooder, presented with the Montréal Jazz Festival Spirit Award just minutes before his outstanding concert in Place des Arts' second-largest (but better-sounding than its biggest) hall, Théâtre Maisonneuve. Cooder has built a career, now in its sixth decade, that represents a complete and utter disregard for stylistic boundaries and, instead, has explored any and every kind of music that's been a draw for the guitarist/vocalist. If a single word can be used to describe Cooder, it's archivist.

Drawing upon American music spanning the last century or more, Cooder has also gone deep into music from other countries, in particular Mexico and, with his Grammy Award-winning Buena Vista Social Club (Nonesuch, 1997), Cuba, bringing a wealth of artists from the Caribbean island to international attention, through the album, the many more it spawned from individual participating musicians, and Wim Wenders' marvelous 1999 film of the same name.

In his own seventeen album discography as a leader, Cooder has reworked music from artists as diverse as Johnny Cash, Elvis Presley and Ben E. King to Lead Belly, Blind Willie McTell, Vicente Fernández and Burt Bacharach. Cooder's own writing, never been particularly fecund, has always been compelling and, in recent years, more prolific. He has also been involved in cross-cultural collaborations like the two Grammy-winning albums A Meeting By the River (Water Lily Acoustic, 1992), with India's Vishwa Mohan Bhatt, and Talking Timbuktu (World Circuit, 1994), where the guitarist collaborated with Malian guitarist Ali Farka Touré.

The unfortunate reality, however, is that Cooder rarely tours, making his appearance at FIJM all the more welcome. The last time he toured extensively (at least, making it to Canada) prior to Buena Vista Social Club, barring his 2016 trio tour with Ricky Scaggs and Sharon White, was in 1994 in support of Little Village, the supergroup also featuring John Hiatt, Nick Lowe and Jim Keltner. Prior to that, his last Canadian appearances were a decade prior. At this rate, the chances of the 71 year-old Cooder returning to Canada again are slim, and so there were many fans in the audience who'd traveled from the USA and farther abroad to experience a guitarist who has also secured his reputation in music history for his distinctive slide guitar work, multiple tunings and use of other instruments including mandolin, banjo and ukulele.

Cooder was touring in support of his latest album, The Prodigal Son, released this past May by Fantasy Records. The guitarist's albums are always welcome, but with The Prodigal Son Cooder has released his best album in 30-plus years, right up there with early classics including Into the Purple Valley (Reprise, 1972) and Paradise and Lunch (Reprise, 1974), and mid-period watersheds like Bop Till You Drop (Warner Bros., 1979), The Slide Area (Warner Bros, 1982) and Get Rhythm (Warner Bros., 1987).

One thing is certain: Cooder has always been relevant, no matter what decade/century he's exploring. Still, his FIJM show, along with his recent albums (Pull Up Some Dust and Sit Down (Nonesuch, 2011), the unexpected Election Special (Nonesuch, 2012) and, now, Prodigal Son), the guitarist/vocalist has, perhaps, never been more apposite. Featuring no fewer than seven of Prodigal Son's eleven tracks, Cooder's set also drew heavily on Bop Till You Drop, featuring a full four songs from that record, as well as making brief stops on Into the Purple Valley, Paradise and Lunch and Get Rhythm.

Cooder has, for the past several years, been collaborating with his son, and so it was no particular surprise that Joachim, who was also a member of Cooder's backing band for this tour, the Grammy Award-nominated Hamiltones, performed a brief twenty-minute opening solo set, accompanied only by fellow Hamiltone saxophonist Sam Gendel.

Rather than playing the percussion and drums that largely occupied him during his set with his dad, Joachim Cooder largely focused his short set on what looked like a massive mbira, the African thumb piano. A couple of feet wide, it provided far more possibilities than the smaller traditional instrument, which Cooder took even farther by processing it through a variety of effects while, at the same time, triggering a bass drum sample with his right foot and playing cajón and a variety of hand percussion instruments, all occasionally looped into rhythms that allowed him to layer mbira chords and melodies in support of his vocals. Gendel, playing everything from alto to bass saxophone, also utilized a variety of effects, in particular a harmonizer that allowed him to build lush, harmonically shifting chordal backdrops for Cooder that clearly referenced Fourth World trumpet innovator Jon Hassell.

The brief set was not without its flaws. Cooder is not a particularly strong lyricist, and so the blues that he introduced as being played by his father to him, on banjo, when he was very young, was the best of the set from that perspective. His voice, too, was only average. Still, the music Cooder and Gendel created between their instruments and effects transcended any such weaknesses. An album of Cooder playing his large mbira would be most welcome.

After a brief break, father Cooder came onstage with Gendel for an unusual but effective opener from Prodigal Son, Blind Willie Johnson's plaintive blues, "Nobody's Fault But Mine." Looped electronics, ambient saxophone chordal backdrops and Cooder's inimitable acoustic slide playing and heartfelt vocals drew the capacity crowd (much like bluegrass singer Alison Krauss' whisper-quiet opener at the TD Ottawa Jazz Festival a few days prior) away from their world and straight into Cooder's universe for nearly a hundred minutes.

Beyond the innate (and deceptive) challenge of some of Cooder's music, it's a simple truth that anyone looking for a sleek, polished performance would have had to look elsewhere. Instead, Cooder's set was loose, sloppy, sometimes not quite in tune...but heavy on an emotional resonance that rendered all other considerations immaterial. It was all about feel, about getting deep inside the music, about taking risks and about looking for—and, at times, finding—those wonderfully elusive moments of pure magic.

There were many to be found during Cooder's show. The set was also high on spirituality, whether it was a particularly moving version of the gentle, Cooder-penned opener to Prodigal Son, "Straight Street," going to church with Blind Willie Johnson's "Everybody Ought to Treat a Stranger Right," or straight to heaven with Cooder's own "Jesus and Woody," which finds Jesus opining with Woody Guthrie, the social justice singer/songwriter whose music Cooder has covered in the past.

About Bela Fleck & The Flecktones