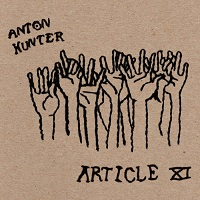 If Frank Zappa had been co-musical director of Charlie Haden's Liberation Music Orchestra then the results might have sounded something like Article XI. Think Carla Bley's charts, Haden's missionary passion and Zappa's sudden shifts in direction and you may begin to get an idea of the terrain Anton Hunter's eleven-piece band explore on this live performance—the band's debut. Commissioned by the Manchester Jazz Festival in 2014, the title refers to Article 11 of the European Convention on Human Rights, which proclaims the right to peaceful assembly, freedom of association and the right to form trade unions. It's just the sort of platform that would have inspired Haden, who, you also suspect, would have admired Hunter's orchestral vision.

For over a decade Hunter has peacefully, though rather noisily, associated with Manchester improv collective The Noise Upstairs and the wonderful Beats and Pieces Big Band, as well as leading his own trio. Article Xi is an altogether more personally ambitious statement from Hunter, who opts for bold ensemble colors, modulating rhythms and extended improvisations within the orchestral framework. His own guitar flits in and out of the mix, though bar a patiently constructed solo on the slow-burning meditation that is "Innards of Atoms," his role is mostly confined to subtle comping; the overriding impression here is that the ensemble is his instrument.

A fine ensemble it is too, with practically all the musicians being leaders in their own right. Finnish bassist Eero Tikkanen's spacious grooves contrast with Johnny Hunter's bustling freedom, while the juxtaposition of long phrases and short, riff-like motifs in the horn sections creates further layers of contrast and tension. There are some fine individual performances too, though apart from Tikkanen, and Mette Rasmussen's alto solos, it's not immediately possible to identify the other, uncredited soloists, which is a pity, as the trumpet, trombone and tenor saxophone solos are uniformly excellent. There's also an anonymous flute buzzing around here and there.

Broadly speaking, there's a stylistic continuity throughout the suite-like hour of music, with Hunter steering the ensemble between rich, harmonic passages—notably on the lush, Ellingtonian "Retaken"—and looser improvisational plains. At times, the two overlap, as on "I Dreamed I Spat Out A Bee," where Rasmussen's spirited improvisation is framed by punchy unison riffing. Droning trombone and puttering baritone saxophone lend darker hues to the edgy abstraction of "C# Makes the world A Better Place"—a composition striking in its minimalism. Compelling too, the bluesy dirge of "Peaceful Assembly," with marvellous trumpet and trombone solos at the heart of a lyrically understated number that swells grandly in the final stretch.

The stripped-down, slow-grooving "I Almost Told You" is a vehicle for individual improvisations, whereas "Not The Kind Of Jazz You Like" harnesses the power of the eleven-headed beast, where a feisty trombone solo—buoyed by the orchestra —is framed either side by Roscoe Mitchell-esque collective improvisations and driving riffs. Fittingly, Hunter's raucous ostinato is the prominent voice in a rousing finale.

Stirring and tender, gutsy and meditative in turn, Hunter marshals his mini-orchestra with swagger and aplomb, drawing on the individual and collective strengths to produce an impressive document. A large ensemble clearly suits Hunter's writing ambitions. Hopefully another article or two might inspire him similarly down the line.

Retaken; Innards of Atoms; I Dreamed I Spat Out A Bee; C# Makes The World A Better Place; Peaceful Assembly; I Almost Told You; Not The Kind of Jazz You Like.