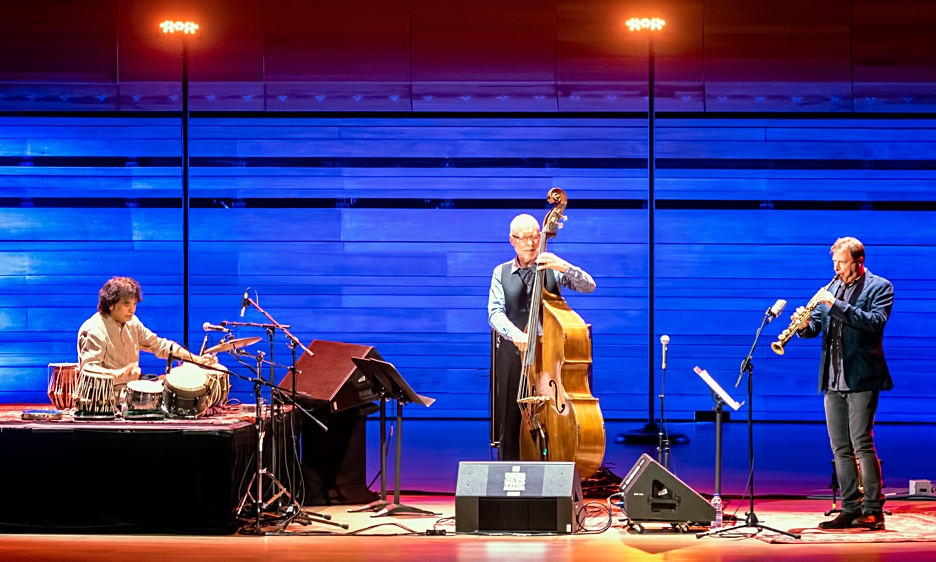 It is always a pleasure to return to Montréal for the festival. This is only my third year, which makes me a relative newcomer; many of the journalists I have met have been regulars for ten or twenty years. But I have always felt welcome, and experienced hands have freely shared their knowledge with me. I suspect that this edition will be long remembered for its challenging weather. It was in the 90s all week, with a heat index approaching 100 degrees Fahrenheit. The heat wave finally ended on Friday, making it much more comfortable to be outdoors. It was strange to see attendees wearing jackets in the evening!

The heat had the most impact on the free outdoor stages and street food vendors, although the crowds seemed normal (large!) to me. The high-profile acts—jazz and otherwise—all performed in air-conditioned theaters, where the outside temperature only affected audiences coming and going. According to the festival organizers at the wrap-up press conference, attendance was lower during the afternoons of the heat wave, but went up in the evening, effectively balancing out the total attendance numbers.

Montréal's SHPIK took the stage immediately after being presented with the TD Grand Jazz Award, complete with a Commerce Clearing House-style giant check. Pianist/composer Arnaud Spick-Saucier (who accepted the award onstage) was joined by double bassist Etienne Dextraze, drummer Philippe Lussier-Baillargeon and saxophonist/flutist/soundscaper Alex Dodier. This was clearly a real band, albeit one with the pianist in the leadership role. They even had a band logo hung above the stage.

Their music was impressionistic, in the ECM mold, recalling someone like Tord Gustavsen. Dodier barely functioned as a jazz horn soloist at all, emphasizing electronic modification and looping; much of the time his contributions brought to mind soundscapers like Norwegian guitarist Eivind Aarset more than other horn players. So the total sound was like a contemporary piano trio with electronics. Dodier's parts were frequently in the background as atmospherics, but he occasionally was in the foreground. One piece featured a looped flute interlude, and concluded with a soundscape of wordless vocals. The overall audience response was lukewarm, but the band did succeed in getting the crowd to clap along to the final piece, built around Spick-Saucier's manic rhythmic piano part.

The audience was clearly there for drummer Brian Blade & the Fellowship Band (in fact, many had apparently not even noticed that there would be an opening band in the festival program), and they were not disappointed. I have been fortunate to hear Blade in a number of live settings, including Chick Corea and John McLaughlin's Five Peace Band; the Chick Corea Trio (here in Montreal in 2016); the Wayne Shorter Quartet; the tribute band Still Dreaming (Montreal, 2017) and the John Patitucci Electric Guitar Quartet. In all of those settings Blade brought energy, excitement and unpredictability to the table. Along with unbridled joy; I can think of no other musician who looks so happy to be making music when onstage. It always makes me happy just to watch him. I'm also a fan of the Fellowship Band recordings, but this was my first opportunity to hear them live.

The group was very guitar-oriented in the beginning, including both electric guitar and pedal steel. But, while there was a guitarist (Dave Devine) on their most recent album Body And Shadow (Blue Note, 2017), the role has become far less central. So this guitar-less quintet never sounded less than complete, all of the parts covered and performed with verve. Even without a guitar the sound tends to have a traditional, folk music-like atmosphere. Their recordings are often quite succinct. In performance they took the opportunity to stretch things a bit, but not dramatically so. They were a powerful group of improvisers individually, but collectively there was an emphasis on composition rather than blowing.

Pianist Jon Cowherd played a few beautiful, expansive solos, and it was always memorable when the band pared down to the rhythm section as a piano trio. He also took to the harmonium for the traditional song "Shenandoah," from Landmarks (Blue Note, 2014). The arrangement runs just under two minutes long on record, but Cowherd's contemplative introduction alone was longer than that, before being joined by the horns for a glorious reed sound. "Farewell Bluebird," also from Landmarks, was an absolutely electrifying performance. It demonstrated all of the band's strengths: an unaccompanied opening by Blade, using brushes; a feature for the rhythm section; and a powerful demonstration of dynamics when the horns re-entered. Then Myron Walden's testifying alto saxophone solo lifted the energy level to another plane. Tenor saxophonist Melvin Butler didn't even try to match Walden's intensity, instead going a reflective route for his solo, which was just as satisfying in its own way.

For an encore, Blade announced the lullaby "Friends Call Her Dot," again from Landmarks. It was a calm, mostly through-composed way of winding down for the night, and a wonderful first experience hearing the band live. I look forward to many more.

Canadian pianist/composer Renee Rosnes was presented with the festival's 2018 Oscar Peterson Award (which recognizes a performer's musicianship and exceptional contribution to the development of Canadian jazz) onstage, just before her opening set in a double bill with the Trio. The first thing she did was introduce her band mates: drummer Lenny White; bassist Robert Hurst; and vibraphonist Steve Nelson. They began the program with "Elephant Dust," from her recent Beloved of the Sky (Smoke Sessions, 2018)—a much faster tune than anything with the word "elephant" in the title should be.

The set list also drew from Written in the Rocks (Smoke Sessions, 2016), beginning with the 6/8 modal swing of "Lucy From Afar." The performance included a lovely piano/vibes breakdown and a humorous double bass tag to end the piece. "From Here to a Star," from the same album, shifted to a deliberate, moderate tempo, with space for a virtuosic solo from Hurst and a section with the entire band trading fours. "Beloved of the Sky" was an impressionistic, sectional composition to end the set. It included a blazing vibraphone solo from Nelson and a memorable drum solo from White (accompanied by an ostinato pattern from the rest of the band). This was a veteran group of musicians, and they delivered their usual high playing standard in service of Rosnes' music—a most fitting sequel to the award presentation.

Another award presentation onstage preceded the next act. Percussionist Zakir Hussain was given the Antonio Carlos Jobim Award (which honors artists distinguished in the field of world music and whose influence on the evolution of jazz and cultural crossover is widely recognized). Claiming that he did not deserve the award, he allowed that it at least "proves I'm on the right track." The concert began with Hussain playing an unaccompanied introduction to double bassist Dave Holland's "Lucky Seven," which also featured a virtuosic soprano saxophone solo from Chris Potter. "Island Theory" was a new Potter composition which Holland thought may have been inspired by the group's recent travels. Here, as elsewhere, I was struck by Hussain's nearly telepathic ability to follow the contours of the solos he was accompanying. It was as if he knew what was coming even before the soloist did!

Hussain's "J Bhai" (J Brother) was written in honor of guitarist John McLaughlin, one of the playing partners from whom he has learned. It was marked by call-and-response between bass and saxophone during the theme. This was a pretty exposed setting for a bassist, and Holland dextrously moved between timekeeping and soloing, with the percussionist taking up a shaker for the first part of the tune. Closing the set, Potter's "Good Hope" began with a virtuosic unaccompanied turn on tenor saxophone, and ended with an exciting extended percussion solo supported by a repeated riff from saxophone and bass. For the encore, Hussain took up a frame drum, producing an entirely new set of sounds. The section where the band traded eights was marked by humorous mouth sounds and other light-hearted rhythmic interjections: a fun ending to a wonderfully musical set.

American trumpeter Theo Croker played the late "Jazz dans la nuit" slot in the intimate Gesù space. His mostly acoustic quintet was completed by alto saxophonist Irwin Hall; keyboardist Jan Michael Looking Wolf; double bassist Eric Wheeler; and drummer Kasa Overall, who also co-produced Croker's last album, Escape Velocity (DDB/Okeh, 2016). Croker back-announced the first three titles. The set opened with a premier live performance of "Crestfallen," which the group has recently recorded. King played most of the tune on Fender Rhodes, contributing to the contemporary jazz feel. He switched to grand piano for his solo, though, and overall he was the most technically impressive player on stage (he also played bongos occasionally).

"Real Episode," from Escape Velocity, was a kind of ballad, featuring an expansive double bass solo accompanied by drums and King's synthesizer. "To Wisdom, The Prize" was composed by pianist Larry Willis—Croker said he thought it should be a standard. It had a slightly funk rhythmic feel. Like the rest of the set it recalled groups like the Jazz Crusaders: jazz with a contemporary sound (and a nod towards popular music) without going "smooth."

The city of Montréal has a considerable history of jazz, dating well before the founding of the festival in 1980 and much of it hidden unless one knows where to look. Monument-National (long a festival venue) is the oldest operating theater in the province of Québec, and has a permanent exhibition, MONUMENT-NATIONAL: A Site of Great Undertakings (1893-today), depicting the history of the building and many of the world-famous performers who have appeared there (including several jazz luminaries). The festival headquarters, Maison du Festival, houses an exhibition devoted to the history of the festival, including displays of awards and autographed musical instruments.

The festival sponsored a walking tour with Leah Blythe, an experienced guide who put together a city tour emphasizing jazz history. It began in Windsor Station, a train station that had once been a primary Canadian rail hub. It was also a significant source of employment for the local black population (as train porters). Because of that, there was an area nearby with a number of black clubs that often included jazz.