Myron Walden was born in Miami, Florida on October 18, 1972, moving with his mother to the Bronx at age 12, and grew up listening to a wide range of rhythm and blues, blues, soul, and gospel music. Shortly after the move, as Myron's uncle was listening to a recording of Charlie Parker's 'One Night in Washington,' young Myron was profoundly moved by the music and, hearing the uncle exclaim "Tell it Bird!," he immediately knew that music was his calling and that music would be his voice.

In some ways, his 2009-2010 trio of albums best reflects the way music made him feel at that early age. "When Brian Blade Fellowship was formed I was really inspired. Here was a jazz master who knew country, blues and early rock. Brian helped me realize the vast possibilities in music. My passion is too expansive to be limited to one style. I like to express myself and my emotions beyond the conventions of any one genre." With new recordings, 'Momentum', 'In This World' and 'Countryfied', Walden has created a body of work full of range and passion.

As a boy, the local public school had no music department, but a sympathetic teacher, touched by the child's desire to play the saxophone, encouraged Myron to take home an old alto saxophone from the school storage closet. By studying Charlie Parker's album art and listening to his uncle's record, Myron taught himself to play the saxophone.

Myron's first formal instruction came during middle school at the Harlem School of The Arts' after school program. Myron attended LaGuardia High School of Music and the Arts in New York City, and after graduation attended the Manhattan School of Music, graduating in 1994. That previous year, he won the prestigious Lincoln Center Charlie Parker Competition.

During the 1990s, Myron established his credentials as a performer in New York's jazz scene, and was a fixture at the legendary Small's, a fertile ground for the nurturing of new jazz talent. As he shared the stage with Nat Adderley, Freddie Hubbard, Wynton Marsalis, and Roy Hargrove, his stature as a performer grew. Myron also developed his skills as a composer and, during this period, his compositions were recorded by Antoine Roney, Ravi Coltrane, Vincent Herring, Carl Allen and Winard Harper.

In 1996, Myron's debut album, 'Hypnosis,' was released to great critical acclaim, followed in 1999 by 'Like a Flower Seeking the Sun,' both from NYC Records. In 2002, 'Higher Ground' premiered, with 'This Way' appearing in 2005. The latter were released on Fresh Sound New Talent Records. Myron composed and arranged original music for all four recordings.

All About Jazz and the Jazz Journalist Association named 'This Way' as one of the Top Ten records of 2005. In addition to developing his voice and profile as a leader, Myron has had the good fortune to belong to two bands of particular meaning to him and significance to American music.

In 1997, Myron joined the Brian Blade Fellowship Band at its inception, and he continues to record and perform with the group today. Myron's soulful, passionate solos on the alto saxophone and bass clarinet are frequently cited as moving and exciting parts of this ensemble's performances and Brian has credited Myron's voice as one of his inspirations for his compositions.

In 2003 Myron joined the late Ray Barretto's band. With that band, Myron not only recorded and performed, but also composed and arranged. In fact, Barretto's final GRAMMY-nominated album, 'Time Was - Time Is,' released in 2005, featured two of Myron's compositions, including the title track. Myron served as the arranger for one of the tracks on that album that particularly moved both fans and critics, "Motherless Child." In addition, in 1996 Myron joined as an original member of the New Jazz Composers Octet, for whom he continues to compose, record and perform today. The New Jazz Composers Octet featured Freddie Hubbard at the time of his passing.

Myron is also pursuing his musical journey as a leader with multiple projects. One feature of the newer projects is that he is playing predominantly the tenor saxophone. A few years ago the compositions Myron was beginning to write took on a deeper voice. Although Myron's alto voice is very full, he committed to developing his tenor playing, to better serve the music. This allowed him to add a new voice to his rapidly developing compositions, and to diversify his sound with a refreshed voice that lends depths of feeling to his creative new music.

* There aren't many musicians who have evaded the influence of Miles Davis. Myron Walden's 'Momentum' is a quintet featuring Myron on tenor joined by trumpet on the front line, playing original compositions by Myron, inspired by the Miles Davis band of the 1960s. The music allows the band to create their own momentum, with insight and reference to Miles, Wayne Shorter, and Herbie Hancock, resulting in a quintet bristling with energy.

* 'In This World' reflects a very personal vision, creating music as a soundtrack for the richness of his life experience-expressing love, faith and ease. This quintet features Myron on tenor, soprano and bass clarinet. With the inclusion of acoustic and electric guitar the sound dimension is further expanded. Most of Myron's music is full of energy featuring opposing entities, high-low, loud-soft, long- short, bass on a hemiola while drums play through and vice versa. 'In This World' has Walden's trademark features but successfully expands his musical pallet, embracing the use of space and silence for a reflective and moving mood.

* 'Countryfied' is a saxophone, organ and drum trio with a down home feeling, inspired by blues, rock and roll and the church music heritage of the south. The music has an exuberant roots vibe and more than a tinge of southern fried soul.

These projects have animated Walden's muse and brought his music to a whole new level of feeling. Show less

Myron Walden to Perform at Jazz Standard on March 9th

A Jazz Saxophonist Who Embraces Earnestness

"Now this is what I call A young lion." - Ron Carter 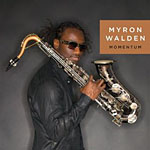 From: Momentum
By Myron Walden

What Goes Up Must Come Down

From: Momentum
By Myron Walden

All About Jazz musician pages are maintained by musicians, publicists and trusted members like you. Interested? Tell us why you would like to improve the Myron Walden musician page.