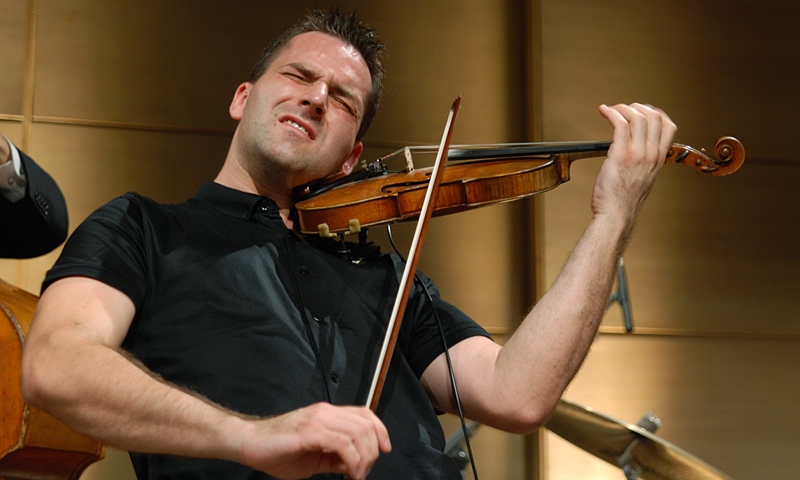 I didn’t know that we have so many jazz violin players in the world. The violin is enjoying a renaissance in jazz. —Professor Janusz Stefański

He was one of the great jazz virtuosos, right up there some would say with Django Reinhardt, Art Tatum and Charlie Parker. Most frequently, however, he was compared to John Coltrane. The cruelly premature death of Polish jazz violinist Zbigniew Seifert at the age of 32 undoubtedly robbed jazz of one of its most exciting and original musical voices. The cancer that took Seifert in 1979, however, could not extinguish his light and he continues to inspire musicians—and not only violinists—around the world.

Evidence of Seifert's growing legacy could be seen in the sixty three entrants from seventeen countries who applied for the 1st Zbigniew Seifert International Jazz Violin Competition. Ten finalists qualified for the semi-finals and finals which were held over three days in the Krzysztof Penderecki European Centre for Music in Luslawice, Poland.

"To be honest, there is a really huge interest," said Aneta Norek-Skrycka, President and co-founder of the Zbigniew Seifert Foundation and one of those chiefly responsible for making the 1st Zbigniew Seifert International Jazz Violin Competition a reality: "We didn't expect to have so many applications and such big interest from the media so it seems that in this we have achieved our goal. Finally in Poland we hear about Seifert."

It's strange to think that Seifert should better known abroad than in his native Poland but he conducted few interviews during his lifetime and only now—through the tireless work of the Zbigniew Seifert Foundation—are those print articles related to the violin genius being digitally archived. Thanks too, to the phenomenon of You Tube Seifert's music is more accessible than it's ever been. It's taken a few determined individuals and the arrival of the internet age to reawaken interest in Seifert.

Significantly too, Seifert's recorded legacy was relatively small and his records have long been out of print in Poland. Recently, however, there has been a spate of reissues and archival releases on CD, which is bringing Seifert's music to new generations. In 2006 Polish label Anex reissued Kilimanjaro Vol 1 and Vol 2, live sets from 1978. In 2008, Polonia Records reissued Seifert's celebrated 1978 recording Solo Violin. In 2010 another Polish label, GAD Records, released Nora, a series of radio recordings from 1969 and 1970 featuring Seifert on alto saxophone. Also in 2010, German label Promising Music issued Man of the Light, remastered from the MPS label recording.

The latter recording—originally released in 1976—is considered by All About Jazz's chief writer and Seifert fan John Kelman to be "a true desert island disc; one of the most exhilarating, important, and underexposed jazz albums ever recorded." Man of the Light featured Joachim Kuhn, Cecil McBee, Billy Hart and Jasper Van't Hof and is widely considered to be Seifert's masterpiece.

Certainly it's the recording that the ten finalists who graced the inaugural competition are most familiar with. All acknowledged being inspired by Seifert and there was a sense of homecoming in their bringing Seifert's music alive once more in his native Poland.

The idea to commemorate and promote Seifert was hatched several years before, as Norek-Skrycka explained to me in the quiet of one of the many practice rooms of the Krzysztof Penderecki European Centre for Music:"I was shocked that although Seifert is such a great musician you couldn't find any information about him and you couldn't buy his CDs in the shops," said Norek-Skrycka. "It's a shame that he is better known abroad than in Poland. I started to figure out what to do to make his legacy known, because as Tomasz Stanko said recently, he's our national treasure."

Norek-Skrycka wrote a master's thesis about Seifert's music but with the ink barely dry she came to the conclusion that to truly promote the violinist beyond the relatively narrow confines of academia a more comprehensive work was required. Consequently, the fiercely determined Norek-Skrycka spent countless hours over the next four years meticulously researching and writing the first biography on Seifert—The Life of Zbigniew Seifert: Man of the Light (Music Iagellonica, 2009), published in Polish.

Trawling newspaper and magazine archives and interviewing many of those who were closest to Seifert during his all too brief life—Norek-Skrycka meticulously checked and cross-referenced anecdotal information about events that were three or four decades old. The result is a beautifully designed and illustrated volume rich in biographical and anecdotal detail and one that has left practically no stone unturned. Numerous photographs, a detailed discography and revealing insights from the musicians—both Polish and foreign—who collaborated with Seifert, together create a rounded picture of the man considered by many to be the most important post-bop violinist of his generation.

For the time being the book exists only in Polish but there are doubtless many Seifert fans around the world who would welcome at the very least an English translation.

In recent years a series of events have helped to raise Seifert's profile at home and abroad. In 2009, to mark the 30th anniversary of Seifert's death, the festival Zbigniew Seifert in Memoriam was held over three days in Seifert's hometown of Kraków. Norek-Skrycka was involved in the organization of that event, along with Professor Janusz Stefański and Małgorzata Jantos. It was also Norek-Skrycka's initiative to found the Zbigniew Seifert Foundation, which beyond the obvious aim of championing Seifert's legend, is dedicated to the promotion of jazz in general.

Also in 2009, a short documentary film on Seifert by Erin Harper entitled Passion was aired. Shot between America and Poland, Zach Brock—who was heavily influenced by Seifert—traces the Polish violinist's steps, meeting many of his former colleagues. A full-length version is on hold as a funding drive gathers momentum and will hopefully see the light of day in the near future.

There was a Seifert In Memoriam concert in Berlin in 2011 to celebrate Poland's presidency of the European Union and the Seifert Foundation's creation of a digital archive to preserve and make universally available issues of Jazz Forum, the Warsaw-based European jazz magazine founded in 1964. The violin competition, however, is about promoting up and coming jazz violin talent around the world as much as it is a celebration of Seifert's life and work: "The competition is our biggest project," acknowledges Norek-Skrycka.

The idea for a jazz violin competition was that of Małgorzata Jantos, the current president of the Zbigniew Seifert Foundation. Norek-Skrycka admits to having reservations at first: "Just after the festival in 2009 Malgorzata suggested we make a competition. I didn't like the idea initially. I didn't like the idea of competition but she convinced me and I think it's a very good idea to promote Zbigniew Seifert's music, which is our purpose."

The high quality of the finalists was matched by the quality of the judges for the 1st Zbigniew Seifert International Jazz Violin Competition, with Glen Moore, Mark Feldman and Janusz Stefanski charged with the difficult task of selecting a winner: "They're great musicians and they love Seifert," explained Norek-Skrycka. "Janusz and Glen both knew Seifert and were very close to him, so this is a dream team."

Moore remembers the first time he heard Seifert's playing on an old cassette recording over forty years ago: "Zbigy was playing "Autumn Leaves." I thought it was a string quartet there was so much going on." So impressed were Moore and his fellow Oregon band members after seeing Seifert in concert in France in 1975 that they invited him to record with them, a collaboration that would result in Violin (Vanguard, 1977). Moore, who later invited Seifert to play on his album, Introducing Glen Moore (Elektra, 1979) knows a thing or two about great violinists, having played with Stuff Smith, Stephane Grappelli and Joe Venuti: "It was a jaw-dropping experience to be in the same room as Zbigy," the veteran bassist enthused.

What was it about Seifert's playing that excited such glowing praise from the likes of Moore, John Scofield, Richie Beirach, Jack DeJohnette and many others who played with him? Stefański, looking fit and tan at age 68, knew Seifert better than most, having been part of Seifert's quintet from 1966 to 1973 and having played alongside Seifert in Tomasz Stanko's first important quintet between 1968 and 1973. "The critics in western Europe from the beginning were taken aback," explained Stefański. "They had never heard such violin playing before. He played completely different, not like Jean-Luc Ponty or Didier Lockwood. He played completely different kind of melodic harmony, different kind of lyric expression."

Most people, however, are initially blown away by Seifert's technical virtuosity: "He played saxophone melodies on violin, which is so hard," Stefański continued. "Some of the melodies are impossible to play, you know, some of the connections for the notes. But Zbigy...ah!" Stefański trailed off shaking his head, at a loss for adequate words and smiling at the memory of his great friend's prowess.

The venue for the 1st International Zbigniew Seifert Jazz Violin Competition was the magnificent edifice of the Krzysztof Penderecki European Centre for Music. It stands in the middle of a wide, flat valley of wheat and corn fields flanked on either side by conifer-crowned hills. The nearest town, Luslawice with a population of around nine hundred, is a mile away. It seems an unlikely location for such an impressive institution.

The KPECM was the initiative of the world-renowned classical composer Krzysztof Penderecki, whose aim was to create a musical center of excellence for Polish and foreign students alike. Three years in construction, the doors were officially opened in May 2013 and in the short time since then the KPECM has hosted a series of high-profile classical concerts. It has also received with open arms hundreds of music students who come for intensive courses of study with expert tutors.

Modern, well equipped and comfortable, students are given private accommodation and eat communally in the dining hall. A table tennis table and a TV that nobody watches are the only diversions from the job of making music. It's something akin to a monastic retreat, except for the forty Polish accordionists and ten jazz violinists who were in residence together for several days.

After an introduction from the emcee, Polskie Radio 2's Janusz Jablonski, the President of the Zbigniew Seifert Foundation and the competition's main organizer Aneta Norek-Skrycka spoke of the organization's pride in hosting the first edition—a two-year labor of love for the dedicated team. She thanked patrons and supporters with a special mention for Adam Balas, Director of the Krzysztof Penderecki European Centre for Music. Norek-Skrycka extended a warm welcome to Agnieszka Seifert-Beck, Zbigniew Seifert's widow, who had made the journey from Munich especially to attend the competition.

The supporting trio for the ten violinists throughout the three days of competition was The Aduiofeeling Trio lead by pianist Pawel Kaczmarczyk, with bassist Maciej Adamczak and drummer Patryk Dobosz.