Back in 1971, when guitar-god John McLaughlin left Miles Davis and (Tony William’s Lifetime) to form the groundbreaking Mahavishnu Orchestra, he was the first to combine the fire of Hendrix-drenched rock with the groove of Coltrane’s modal jazz & the ethereal Indian ragas of Ravi Shankar. The critics called it “jazz rock” (of course it was much more) and the result was nothing less than a musical revolution. The Mahavishnu Orchestra has since been cited as a major influence on everyone from King Crimson to Phish, and was in many ways one of the first electric jam bands. Not surprisingly however, the music of the Mahavishnu Orchestra hasn’t gone on to be covered and re-interpreted by the many bands it has affected, largely due to its extreme technical demands. That is, until now.

The Mahavishnu Project launches directly from where the original band abruptly left off. In 2001, this incendiary unit from New York City began performing their unique renditions of music from classic Mahavishnu discs such as Birds of Fire, Inner Mounting Flame and Between Nothingness & Eternity and Visions of the Emerald Beyond while remaining true to the cutting edge improvs of the original band, and to McLaughlin’s stunning compositions. Their take on the music must be quite special, as they have received the seal of approval from Maestro McLaughlin himself!

The Mahavishnu Project is led by extraordinary drummer/composer Gregg Bendian, widely known for his work with Pat Metheny, Ornette Coleman, & John Zorn. Bendian has received rave reviews for his and Nels Cline’s Interstellar Space Revisited: The Music of John Coltrane (Atavistic), his band Interzone’s Requiem for Jack Kirby (Atavistic, 2001) and his sterling drum and vibes work on the long-awaited We Saw A Bozo Under The Sea (ZHR, 2001) by former Beefheart guitar whiz, Zoot Horn Rollo. Bendian’s talents are uniquely suited to the daunting challenge of another shining icon of creative music -- The Mahavishnu Orchestra.

The Mahavishnu Project has toured extensively throughout the US and Europe. The band has begun extending the Mahavishnu legacy into the future by including Mahavishnu-inspired original compositions in their shows. The Mahavishnu Project presents an electrifying live show that resurrects and replenishes the spirit of the original Mahavishnu's soaring melodies, intricate grooves and spontaneous, all-out jamming -- and yes, they‘re endorsed by the master - John McLaughlin himself! 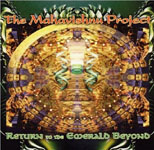 Return to the Emerald...

All About Jazz musician pages are maintained by musicians, publicists and trusted members like you. Interested? Tell us why you would like to improve the The Mahavishnu Project musician page.