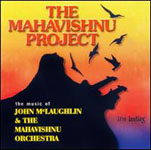 The old soul classic pretty well says it all: "Ain't nothin' like the real thing, baby." In this era of repertory projects, from Henry Kaiser and Leo Smith's Yo Miles! to Ken Vandermark's assays of Sun Ra and Albert Ayler, it seems only logical that some die-hard fusion fans would revisit the legacy of John McLaughlin's Mahavishnu Orchestra. Given the unparalleled technical might of that ensemble, it's a Sisyphean task to try and recreate an nth of the Mahavishnu spirit. One must admire Gregg Bendian for this solid attempt at honoring the great beast.

It should be said right away that Pete McCann is one of the best, most versatile guitarists working in jazz today. From mainstream originals to the avant-garde, he has exhibited amazing flexibility and consistency over the past several years. However, with that in mind, McCann does not seem the ideal candidate to regenerate McLaughlin's pyrotechnic flights. It's not clear who would be up to such a task, but on the evidence of this disc McCann's respectable chops aren't in the same neighborhood as his heart. Neither is Todd Reynolds quite an ample substitute for Jerry Goodman, nor Bendian for Billy Cobham. It's a given that successful repertory work requires a fair approximation of the original animal. How would we react if, say, the men of Beatlemania sounded more like the Monkees than the Fab Four? Since it might be all but impossible to achieve a pristine Maha-mania in this day and age, perhaps it's best if we take the Project on its own merits. On that level, Bendian and company offer up a bright, exciting and entertaining package of high-energy fusion.

There is plenty to enjoy here, from bone-crushing chops to lace-intricate interactions between the players. Steve Hunt's admirable dexterity helps him to rip through the dense fishnet of "Celestial Terrestrial Commuters." McCann and Reynolds seem to hit their stride on the daunting "Birds of Fire" and "Open Country Jam," blasting through the complex changes with fiery passion. It's a shame that Reynolds was not better miked at this show because it's obvious that he is a player worthy of one's fullest attention. Stephan Crump's bass is even worse off, hardly audible at all through much of the set. The most frustrating point is "Dream," which is recorded at such a low level that the first six minutes are pretty much a loss. The remaining eleven minutes or so redeem the situation somewhat, but it's hard to shake off the initial ennui. Bendian is all thunder and lightning on "One Word," bringing the night to a successful close. Despite its few hitches and the titanic expectations that come with tackling a project like this, Bendian and friends have delivered a document that's still well worth hearing for the chops-hungry among us.