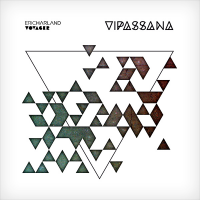 Much is said about records once they've come into the world, but little is discussed about the motive(s) surrounding the birthing of a record. Sometimes it's simply about marketing, exposure, money, and pure narcissism. There's nothing necessarily wrong with that on some level(s), and many classic albums have been made with little to nothing else in mind, but it's harder to appreciate the artistry and the artist when records made for such reasons appear on the horizon. It's far more satisfying to sit back and soak in the beauty and power of expertly-crafted music that's been made in the name of self-expression by an artist who simply wants to capture who he (or she) is on a record. At least that's the case with this one.

Drummer Eric Harland has come to embody all that is right and good in jazz and drumming today. He's a drummer's drummer, a musician's musician, and a supremely gifted communicator, capturing the spirit of sound and soul in his every beat. That's evident on countless recordings. You can hear it when he lays down a simple and perfect groove on "Mo' Better Blues" from pianist Jacky Terrasson's Smile (Blue Note, 2002); it's apparent when he plays the role of a rhythmic mystic behind saxophone shaman Charles Lloyd; it's plainly obvious when he adds a high-octane kick to the SFJAZZ Collective's trips through the work of Horace Silver, Stevie Wonder and others; and you notice it without fail when he digs in his heels with bassist Dave Holland's Prism. The fact that Harland is such an in-demand side man has driven him to play different parts for different people, perhaps suppressing his own personality a bit in the process. His Voyager project has rectified that issue, giving him the chance to put himself out there for all to see and hear.

This band's debut—Voyager: Live By Night (Space Time Records/Sunnyside Records, 2011)—found Harland working different moods, but residing in a singular stylistic camp. It wasn't all charge-ahead, firing-on-all-cylinders music, but all of the songs fell squarely under the admittedly all-too-broad "modern jazz" category. The music presented on Vipassana isn't as unidirectional. Songs like "Relax" and "Passana" aren't "songs" at all. They're groove jams built in a Robert Glasper-turned-meditative vibe. That's not at all surprising when you consider that the album's title is a Buddhist-connected term that's often translated as "Insight Meditation." The same vibe can also be felt throughout "VI," a short vehicle for pianist Taylor Eigsti.

Those hip-hop-laced tracks show off a side of Harland that many may be unfamiliar with, but they don't define this record. This isn't Eric Harland's arrival as a fully converted neo-soul jazz-er. The modern jazz, and quite a bit more, is still here. Harland and company create songs built atop cross-rhythmic streams ("Raghavan" and "Eminence"), boil over with enthusiasm, paint poignant and semi-ethereal pictures ("Greene"), and, in an odd twist, turn toward rock balladry on a single occasion ("Normal").

All of the musicians that appeared with Harland on Voyager: Live By Night—Eigsti, saxophonist Walter Smith III, guitarist Julian Lage, and bassist Harish Raghavan—return here, and guitarist Nir Felder joins up, adding another dimension. But it's the other new arrival—vocalist Christopher Turner—that serves as a game-changer. He's the focal point on "Normal," he adds to the wonderful mayhem of "Dhyana" with his wordless vocals, and he ushers in the album with a dreamy, shifting, layered request: "You don't need to worry; just relax your mind." Following his advice isn't a bad idea. It adds to the mind-altering experience of hearing Vipassana.