Chicago-born trumpeter Marquis Hill released his first album while still in college and in 2022, just over a decade later, he has retooled it on New Gospel Revisited, recorded live in his hometown with a fresh lineup and tweaked instrumentation. It is a terrific disc. Like his near contemporary and fellow trumpeter Christian ...

Ambrose Akinmusire: On The Tender Spot Of Every Calloused Moment

Trumpeter and composer Ambrose Akinmusire rings the changes admirably from album to album. On The Tender Spot Of Every Calloused Moment is the most stripped down of his Blue Note outings (it is his fifth album for the label). It is made with a quartet. There is no second horn. The sound is ECM-like in its ... 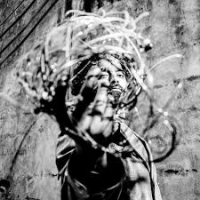 Several factors make bassist Harish Raghavan's debut album remarkable. The first and most striking is the sense of extreme urgency in the tone of the compositions as well as the disjointed manner with which the instruments search for common ground in and around each other. Another factor can be found in the understated melodic motifs whose ...