In the era of early jazz and swing, the violin was often an instrument that carried a hint of an old-fashioned sound—a suggestion of classical music, of the high-society dance orchestra, of the gypsy café music of Europe. But Stuff Smith, considered one of the most important jazz violinists of his time, made music that told a different story: Smith's violin was raucous, rhythmically daring, and bluesy, looking toward the future, not the past. Like most great jazz players, Smith pushed the envelope in his playing, and later in his career he adapted with little difficulty to the new musical language of bebop. Smith also sang and was the composer of several jazz standards.

Hezekiah Leroy Gordon Smith was born in Portsmouth, Ohio, on August 14, 1909, but grew up in Cleveland. His father taught him to play the violin and encouraged him to study classical music. Smith took some music lessons but switched to jazz after hearing Louis Armstrong play the trumpet; Armstrong influenced Smith's own style at a fundamental level. Although he had received a scholarship to study at Johnson C. Smith University, Smith opted for a musical life instead. At age 15 he joined a touring minstrel show, the Aunt Jemima Revue.

In 1926 Smith joined the Dallas-based band of Alphonso Trent; this was one of the so-called “territory” bands that grew from the improvisatory and bluesy roots of jazz rather than moving toward the more composed and arranged style of the eastern seaboard. He stayed with Trent for four years, moving briefly to the band of Ferdinand “Jelly Roll” Morton but returning after becoming frustrated that his violin could not be heard over the dense sound of Morton's group. In 1930 Smith formed his own band in Buffalo, New York.

During his Buffalo years Smith cast one eye on New York, and he got there in late 1935 and 1936 after he composed a scat-like novelty song called “I'se a Muggin'” (the words seem to have no specific meaning). The song caught on, and musician-impresario Dick Stabile booked Smith and his band, which now included drummer “Cozy” Cole, into the Onyx Club on 52nd Street. Rechristened Stuff Smith and His Onyx Club Boys, the band was a successful fixture of the New York scene for several years. The main attraction was Smith himself, attired in a worn-out top hat and sometimes sporting a parrot on his shoulder. Smith and his band also recorded several sides for the Vocalion label in 1936. “I'se a Muggin'” became a moderate hit, but another recording of that year turned out to have longer-lasting resonances—”You'se a Viper,” was covered by vocalist “Fats” Waller in 1943 and enjoyed renewed popularity in the counterculture of the ‘60s and ‘70s.

In musical terms, Smith's Onyx Club years were historically significant; he pioneered the use of the amplified violin, and he developed a bluesy, speech-inflected style that was quite distinct from the European-influenced approaches of Swing Era violinists Joe Venuti, Stephane Grappelli, and Eddie South.

In 1938 Smith appeared in the film ‘Swing Street,’ taking a hiatus from live performing. That took the momentum out of his New York career, and he dissolved his band after a series of disagreements with players and other industry figures. Smith bounced back with a trio that performed in New York (sometimes at the Onyx) and Chicago in the 1940s, and he briefly took over Fats Waller's band after Waller's death in 1943. A series of trio recordings was made in 1943 and 1944, but by the late 1940s Smith's career seemed to be in decline. In the 1950s, to make things worse, Smith suffered from health problems brought on by years of heavy drinking.

Smith was still much admired by his fellow musicians, and he moved to California and continued to perform on what was said to be a centuries-old Guarneri violin. Among his fans was big-time jazz producer Norman Granz, who teamed Smith with bebop trumpeter Dizzy Gillespie and pianist Oscar Peterson for a recording on the Verve label in 1957. It was a measure of the originality of Smith's style that his playing fit as well with this new generation of players as it had with the swing bands of the 1930s. Smith made several albums for Verve and continued to record until shortly before his death.

Touring widely in the 1960s, Smith, like so many other jazz musicians, found that European audiences were especially appreciative of his music. He settled in Copenhagen, Denmark, in 1965 and made several recordings in Europe. Smith fell seriously ill on tour in Paris. Doctors placed him on the critical list; but Smith recovered and continued to perform. He died in Munich, Germany, on September 25, 1967, and was remembered, as “the cat that took the apron-strings off the fiddle.” 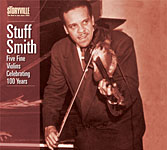 Cat On A Hot Fiddle

All About Jazz musician pages are maintained by musicians, publicists and trusted members like you. Interested? Tell us why you would like to improve the Stuff Smith musician page.