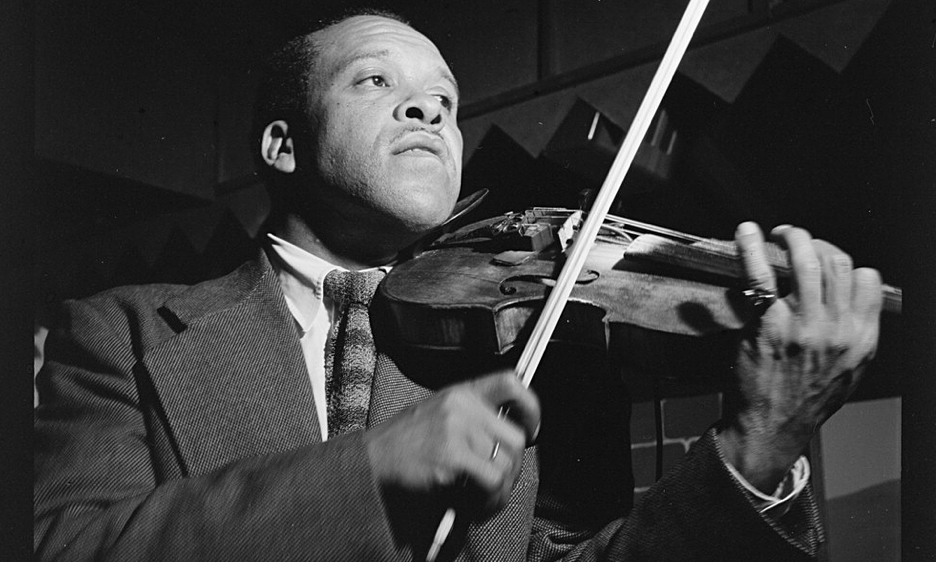 When Hezekiah Leroy Gordon "Stuff" Smith picked up the violin, the house began to rock. The second major popularizer of the violin in jazz after Joe Venuti, Stuff received great success with his small high energy swing band in the Thirties. His choice of instrument was rare in jazz, but because of it's natural flexibility Stuff was able to give the violin a strong, raucous voice. And his spirited playing is on the level of the greatest jazz has to offer.

Being born into a musical family, his mother a pianist and his father a violinist, Stuff began learning the violin at age six from his father. By the time he started taking lessons in earnest at nine he had aspirations of being a classical musician. While attending Johnson C. Smith University on a music scholarship in 1924 at age fifteen in fulfillment of his goal he was introduced to the playing of Louis Armstrong. Stuff was so excited by the music he decided to turn to popular music and jazz, and soon left school to join a touring musical show. It was here that he picked up his nickname "Stuff," a name he used on everyone that eventually turned back to him.

After leaving the show Stuff, worked with Trent Alphonso from 1926-28. He then worked briefly with Jelly Roll Morton and returned to Alphonso's group with whom he stayed until 1930. He moved to Buffalo and for several years lead his own band. However it wasn't until he moved to New York in 1936 that he received wide acclaim.

Stuff landed a gig at the Onyx club for which he was to have residency for five years. His band, a sextet now called Stuff Smith and his Onyx Club Boys, also included the trumpeter Jonah Jones and Cozy Cole on drums. It was at this time that Stuff started playing with an amplified instrument. In the same year he began to record for Vocalion. The music at this time had a vaudeville influence with Stuff singing in a wry voice, much of a predecessor to the jump swing style that would become popular in a few years.

His most popular recording of the time was the self penned "I'se a Muggin'" that has a rather silly dialogue between Stuff and Jones in regards to a counting game. Another great tune from this time is "You'se a Viper," another Stuff song about some intoxicant, which one though I'm not sure. His jocular singing style shows the strong influence of Armstrong. But the jovial nature of the songs nature are best noted in his playing. Stuff plays with a hard and sharp tone utilizing many double stops. He uses just the tip of the bow to achieve a greater attack that is consistent with the sound of the jazz trumpet. His vibrato is very sparse giving way for his very lively and swinging style of playing. And he always creates an atmosphere of excitement.

In the Forties Stuff continued to record and perform in New York. In 1943 after the death of Fats Waller, Stuff was chosen to continue on as leader of the pianist's band. In the early fifties Stuff participated in early recordings of his great admirer, Dizzy Gillespie. Dizzy has cited Stuff as one of his greatest influences on articulation and phrasing. On Diz's version of "Caravan" Stuff plays a terse counterpoint to the melody as well as an exciting solo In 1953 Stuff also contributed to the title track of Sun Ra's first recording "Sound Sun Pleasure!!" However times were getting very lean for Stuff and his career was at an ebb.

Though in 1957 Stuff received a revival with the help of Verve's owner Norman Granz. He brought Stuff in to record many excellent albums with musicians under the Verve banner including Carl Perkins, the Oscar Peterson Trio and a collaboration with Dizzy Gillespie. The music is purely instrumental on the dates and as he is not competing with his voice Stuff lets it all out in his playing. He plays even more on the double stops and with a very expressive use of intonation consistent with earlier players. He also begins to use a wide and dramatic vibrato on held notes and his tone runs from coarse and strong light and lively. His melodic invention is also more adventurous at this time and his energy seems to have no end. His rhythmic sense and phrasing are also very surprising, you never know quite where he is going to go. Also his interpretation of melody is very emotive. Listen to his version of Duke Ellington's "Thing Ain't What They Use to Be." Stuff gives it all the power, soul and bitterness that the blues should have.

In the same year he also recorded a collaboration with fellow swing violinist Stephane Grappelli called Violins No End. Even though they were contemporaries, it is interesting to hear Stuff's bright playing in contrast to the much more sweet style of Grappelli.

In the sixties Stuff began touring extensively in the US and in Europe. He continued to record often both in the states and in Europe and again with other violinists including Jean-Luc Ponty and Svend Asmussen. In 1965 he moved permanently to Copenhagen and remained quite popular until his death in 1967.

Stuff Smith was a unique musician with an ability to create highly energetic and passionate music second to none. He brought to the violin a strong voice equal to any other instrument in the playing of hot jazz. Listening to his many fine recordings one is sure to feel the excitement of this great and entertaining jazz master.