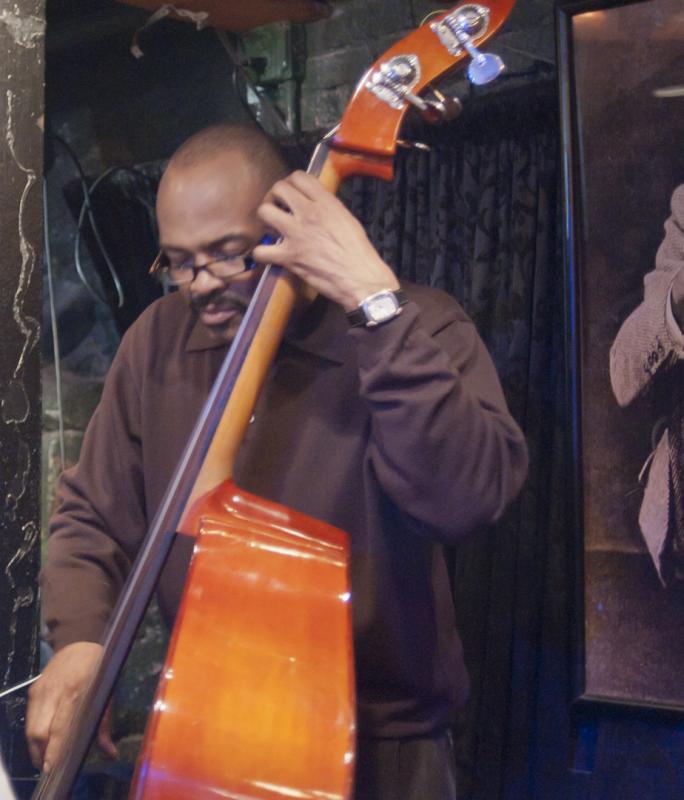 In 1985/86, he joined the Sun Ra Arkestra, with whom he played and toured Europe and Japan and recorded two albums. He was part of the Steve Grossman Trio, with Art Taylor, touring Europe in 1987 and recording. In 1988/89 he was one of the Art Taylor's Wailer's, also recording live at the Village Vanguard with Jacky Terrasson.

He joined Jon Hendricks' European Tour in 1990 and recorded Freddie the Feeloader, with Stanley Turrentine and Wynton Marsalis. In 1992, he played with Shirley Horn, recording Light out of Darkness, and in 1997, played with Rashied Ali, Billy Bang, Jason Lindner, Frank Lowe and Larry Goldings.

One of my most important influences was my dad, a painter and muralist who was friends of John Coltrane, Max Roach and Miles Davis, I've listened tojazz as long as I can remember, Being played at home all day, every day, it was only natural that I would play jazz because that's all I heard around the house. My other influence was my bass teacher, Donald Rafael Garrett, who played and recorded with Coltrane, Archie Shepp and Rahsaan Roland Kirk. He taught me about sound qualities on the bass, and the anatomy of the instrument.

I knew I wanted to be a musician when, at the age of five, John Coltrane came to my house to visit my dad while passing through Chicago. He didn't play his horn while visiting; in fact, I remember he took a nap sitting on the sofa and my father sketching his portrait. After this encounter, I decided to play music. I've been told that I have a big sound on the bass. My walking bass lines tend to be fatter or sustain longer maybe because I use more meat from my plucking finger. My approach to the music is in mixing old and new concepts to jazz. I'm interested in using 5/4 and 7/4 in jazz standards as long as it still swings.

My dream band would be a big band because there so many cats I love for different things. I worked with Sun Ra Arkestra when Sun Ra was alive, and also now. I would use a lot of his concepts as well as Art Taylor and Jackie McLean. My real dream band would be Herbie Hancock, Roy Haynes, Joe Lovano, Roy Hargrove and myself. Yeah!

In 1984, while touring with the Sun Ra Arkestra, we got stranded in San Francisco and let's just say that it wasn't a good experience at all.

Shirley Horn, Light out of Darkness, on Verve. Shirley made everything so comfortable, so relaxed. I really miss her.

The firstjazz album I bought was:

My experience is not enough so I must continue to connect with all generations of musicians, young and old. Bridge the gap of styles. I would like to contribute more original music.

I left New York for 11 years and traveled to Mexico, Cuba and parts of South America, where I played mostly Latin jazz. It was time to get back to New York and swing.

Jazz seems to be at a standstill. But I also feel optimistic about the future of jazz.

One requirement to keep jazz alive is originality. It must constantly be unfolding, redesigning, rearranging. Chances must be taken.

I never thought about that before but I think it would be John Coltrane's "Dear Lord." That song has so much feeling.