Jon Hendricks is not only one of the world's favorite jazz vocalists, but is widely considered to be the “Father of Vocalese”, the greatest innovator of the art form. Vocalese is the art of setting lyrics to recorded jazz instrumental standards (such as the big band arrangements of Duke Ellington and Count Basie), then arranging voices to sing the parts of the instruments. Thus is created an entirely new form of the work, one that tells a lyrically interesting story while retaining the integrity of the music. Hendricks is the only person many jazz greats have allowed to lyricize their music, for no one writes hipper, wittier, or more touching words, while extracting from a tune the emotions intended by the composer, more sympathetically than Hendricks. For his work as a lyricist, jazz critic and historian Leonard Feather called him the “Poet Laureate of Jazz” while Time dubbed him the “James Joyce of Jive.”

Born in 1921 in Newark, Ohio, young Jon and his fourteen siblings were moved many times, following their father's assignments as an A.M.E. pastor, before settling permanently in Toledo. As a teen Jon's first interest was in the drums, but before long he was singing on the radio regularly with another Toledo native, the extraordinary pianist Art Tatum.

After serving in the Army during WWII, Jon went home to attend University of Toledo as a Pre-law major, courtesy of the G.I. Bill. Just when he was about to enter the graduate law program, the G.I. benefits ran out, and he realized he'd have to chart a different course. Recalling that Charlie Parker had, at a stop in Toledo two years prior, encouraged him to come to New York and look him up, Hendricks moved there and began his singing career.

In 1957 he teamed with Dave Lambert and Annie Ross to form the legendary vocal trio Lambert, Hendricks, and Ross. With Jon as lyricist, the trio perfected the art of vocalese and took it around the world, earning them the designation of the “Number One Vocal Group in the World” for five years in a row from Melody Maker magazine. After six years the trio disbanded for solo careers, but not before leaving behind a catalog of legendary recordings, most of which have never gone out of print. Countless singers cite the work of LH&R as an influence, from the Manhattan Transfer to Al Jarreau to Bobby McFerrin.

Pursuing a solo career, Hendricks moved his young family to London in 1968, partially so that his five children could receive a better education. While based in London he toured Europe and Africa, performed frequently on British television, and appeared in the British film

Jazz is Our Religion and the French film Hommage a Cole Porter. His sold-out club dates drew fans such as the Rolling Stones and the Beatles. Five years later the Hendricks family settled in California, where Jon worked as the jazz critic for the San Francisco Chronicle and taught classes at California State University at Sonoma and the University of California at Berkeley. A piece he wrote specifically for the stage about the history of jazz, Evolution of the Blues, ran an unprecedented five years at the Broadway Theatre in San Francisco and another year in Los Angeles. His television documentary, Somewhere to Lay My Weary Head, received Emmy, Iris, and Peabody awards.

Hendricks recorded several critically-acclaimed albums on his own, some with his wife Judith and daughters Michele and Aria contributing. He collaborated with old friends The Manhattan Transfer for their seminal 1985 album, Vocalese, which won seven Grammy Awards. He's served on the Kennedy Center Honors committee under Presidents Carter, Reagan, and Clinton.

In 2000, Hendricks returned to his hometown to teach at the University of Toledo, where he was appointed Distinguished Professor of Jazz Studies and received an honorary Doctorate of the Performing Arts. He was recently selected to be the first American jazz artist to lecture at the Sorbonne in Paris, a university established in the year 1248. His fifteen voice group, the Jon Hendricks Vocalstra at the University of Toledo, performed to a standing ovation at the Sorbonne earlier this year. As if perfecting one original art form weren't enough, Hendricks now finds himself happily penning lyrics to some of the world's most beautiful classical pieces. The Vocalstra is currently preparing to give the world premiere of a vocalese version of Rimsky-Korsakov's lush “Scheherazade” with the Toledo Symphony in February 2003.

Summer of 2003 will find Jon on tour with the “Four Brothers”, a quartet consisting of Hendricks and three of the best-known male vocalists in jazz: Kurt Elling, Mark Murphy, and Kevin Mahogany. Next for Dr. Hendricks is lyricizing and arranging Rachmaninoff's 2nd Piano Concerto, as well as work on two books, teaching, and continued touring with his Vocalstra. He also makes an appearance in the upcoming Al Pacino film, People I Know. Show less

Jazz on the 90th Floor Debuts at All About Jazz with Jon Hendricks...

Jon Hendricks in Studio with Lenore Raphael on the Jazz Spot

A Good Git - Together 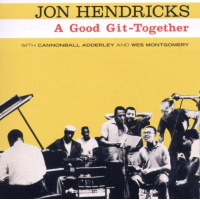 All About Jazz musician pages are maintained by musicians, publicists and trusted members like you. Interested? Tell us why you would like to improve the Eddie Jefferson musician page.