Home » Jazz Articles » This Is Bop: Jon Hendricks And The Art Of Vocal Jazz

By Ian Patterson
January 7, 2021
Sign in to view read count 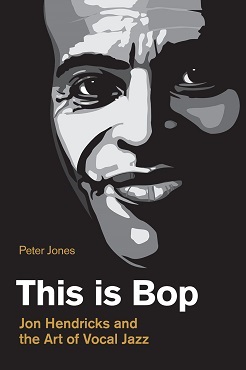 Few are the jazz singers accorded the fanfare usually reserved for the music's great instrumentalists. Jon Hendricks was one, taking scat and vocalese to unprecedented heights. As author Peter Jones recounts—in what is the first biography of Hendricks—the singer's life was the stuff of movies. Born in poverty in 1921, Hendrick's story contains scarcely believable drama, personal tragedy, mixed-race marriages— at a time when laws forbade such a union in half the US states—a heroin addiction, and artistic triumphs against all the odds.

In a long, frenetic career Hendricks sang with a roll call of jazz greats, while the trio Lambert, Hendricks and Ross paved the way for the likes of The Manhattan Transfer. France bestowed upon Hendricks its highest order of merit, the Légion d'honneur, for both his service during World War II and for his artistic achievements. On the cusp of eighty, Hendricks became Professor of Jazz Studies at the University of Toledo and holds the distinction of being the first African American to lecture at the Sobornne in Paris. All this in spite of being unable to read a note of music. As Jones puts it, "He turned this shortcoming into a virtue."

On the subject of musical literacy, Hendricks was forthright regarding the intellect versus the spirit: "The great operatic arias of Giuseppe Verdi are taken from the folk songs of the Neapolitan fishermen. They can't read. They wouldn't know a note if you put it in a boat...It's the hearing of the music that's the important thing, I think. If you can hear it, you can sing it or play it."

And Hendricks' hearing was acute, singing note for note the horn solos of Count Basie's band and that of Thelonious Monk and Miles Davis. Famously, he scatted the distinctive bass styles of Percy Heath, Paul Chambers, Ray Brown and Charles Mingus. Singing at 300 beats per minute was meat and drink to one of jazz' greatest bebop singers.

Jones, who also authored the first biography of Mark Murphy, the award-winning This Is Hip: The Life of Mark Murphy (Equinox Publishing, 2018), pays close attention to Hendrick's formative years. Born in Ohio in 1921, Hendricks' childhood saw him move from one town to another as his father, a preacher, sought new converts. Alexander Hendricks, a reformed drunk, obviously found time for recreation, as his wife, Willie Mae Carrington brought sixteen children into the world.

Hendrick's life appears to be a series of serendipitous events, none more so than in 1932, when the family settled for a few years in Toldeo where Art Tatum was a neighbor. Hendricks, who had nurtured his fine voice in church—as well as in the Irish and Italian saloons where he sang nostalgic ballads for small change— soon began singing with Tatum.

The pair worked a mobster-run nightclub together while Hendricks was still in school, though being black, they had to enter via the kitchen before hitting the stage. It was by no means the worst form of racism that Hendricks would encounter in his life.

The ear training that Hendricks received singing with Tatum—especially with regard to the harmonic possibilities of a tune—were central to his craft. The author, as a professional singer himself, speaks with some authority when he writes of Hendricks: "Anyone who witnessed him in his pomp—eyes closed, head back, scat soloing at incredible velocity whilst still hitting the chord changes—was experiencing the influence of Art Tatum."

Incredibly, aged just fourteen, Hendricks would open shows at Toledo's Waiters and Bellmen's Club for acts such as Louis Armstrong, Duke Ellington, and Count Basie, all of whom he would go on to record and perform with in later life.

Hendrick's life in the years leading up to WWII are poorly documented—and his recall of dates is sketchy—and rather than speculate the author acknowledges these gaps in the singer's story.

There was little chance, however, of Hendricks forgetting his war experience: disembarking at Normandy on D-Day under a hail of German bullets as men fell either side of him; being shot at by racist US Military Police and serving eleven months of a three-year jail sentence for his understandable desertion; falling under the spell of Charlie Parker and Dizzy Gillespie whom he first heard on the ship radio en route to America after the war.

After a two-year stint leading a be-bop band in Rochester New York, Hendricks returned to Toldeo. A law degree, and marriage to Colleen Jean Moore, a singer of Irish decent, proved that Hendricks had a keen intellect as well as a brave disregard for the racial intolerance that was prevalent.

It was at Toldeo's Civic Auditorium that Hendricks first saw Charlie Parker. At Collen's behest, Parker invited Hendricks up on stage to scat and was so impressed by the young singer that he told Hendricks to look him in up in New York.

Racism, the author relates, eventually drove Jon and Colleen to try their luck in Canada, but they were denied entrance due to insufficient funds. Had they possessed just a few hundred dollars more, Jon Hendrick's story might have turned out very differently. They headed for New York.

Jones duly covers Hendrick's early collaborations with Louis Jordan, his growth as a songwriter and the phenomenal career of Lambert, Hendrick and Ross. The vocal trio burned fiercely between 1957 and 1962, when Ross left. The author sheds light on the trio's chemistry, virtuosity and recording techniques, while never shying away from criticism of their imperfections, artistic and personal. One of Hendricks more questionable habits, Jones relates, was collecting royalties via Hendricks Music Inc. for other artist's instrumentals to which he had added lyrics.

Hendrick's career gains came at the expense of family, and neglect seems to be a recurring motif throughout much of his life. His marriage to Colleen was over when Hendricks met Judith Dickstein in 1959. This second marriage lasted from 1961 until her death in 2015.

Jones recounts an extraordinary episode when Jon and Judith were separated from their children at a London airport. A "kindly stranger" reunited them and somehow accompanied the Hendricks family to the house of the English singer Donovan, where they were staying. The parents then flew to Germany for a gig, leaving the man to babysit their two children. The not so kindly stranger stole the Hendrick's stash of cash from the house and absconded.

In spite of the false start, Hendricks and his family spent over four years in England, the singer throwing himself with his usual flamboyance into the spirit of swinging '60s London. Eventually, they relocated to California, though the road was really Jon Hendricks' first home. Closer family ties developed when Hendricks children were old enough to sing in his groups, touring together as Hendricks and Company, although Colleen Hendricks, the youngest of Jon's children from his first marriage, died from a suspected drug overdose in 1981.

Given that Hendricks was active into his nineties the guts of the book covers his solo career, the highs and lows of which Jones documents in detail and with a good ear for a striking anecdote, even at the expense of Hendricks, who was notorious for being stingy towards his musicians.

Had Hendricks never recorded another album or sung another note after Lambert, Hendricks and Ross, he would still be revered as one of the greatest jazz singers of all time. But as This Is Bop... relates, Hendrick's achievements were many. Major projects like the Evolution of the Blues stage musical written in 1960, and the lyricization of Miles Davis/Gil Evans' Miles Ahead attest to both his ambition and artistic success.

The Miles Ahead project was one that Hendricks had first envisaged half a lifetime before. His dream was finally realized in 2017—thanks in no small part to Pete Churchill—when the London Vocal Project premiered the work in New York before a delighted Hendricks, who had left his hospital bed to attend.

Having recorded a duet with Jazzmeia Horn in 2016, when he was 93, it comes as a surprise to learn that Hendrick's last album as a leader was released back in 1995. Still, a comprehensive discography at the book's end underlines that Hendricks was much in demand on other people's projects until the very end, recording as he did with Wynton Marsalis, Dave Brubeck, Benny Carter, Kurt Elling and George Duke, to cite just a few examples.

Thoroughly researched on both sides of the Atlantic and featuring interviews with many of Hendrick's close family and colleagues, This Is Bop is an insightful and entertaining portrait of a flawed though much-loved jazz great.