Fresh from their successful debut at the Newport Jazz Festival, The Royal Bopsters is a jazz vocal quartet made up of New York’s finest jazz singers/music educators that specializes in Bebop and Swing music. Their highly acclaimed break out release on Motema Records allowed them to sell out a week at NY’s Birdland Jazz Club and garnered them 4 ½ stars from Downbeat Magazine as well as making many top picks for 2015. Their eagerly awaited second recording will be released this Spring and once again features the true jazz royalty of Sheila Jordan and the late Bob Dorough, each lending their iconic voices and stylings (not to mention their writing) that has garnered such praise as, “If this disc featured just the quartet, it would be sensational. The addition of the icons all in remarkably fine form, escalates it from valuable to priceless from piquant to landmark…” – Christopher Loudon Jazz Times.

With singers ranging from age 33 to 93, The Royal Bopsters Project is a multi-generational vocal summit on which the talents of singers London, Meader, Pramuk and Ross unite in harmony to pay tribute to the art of vocalese singing and to the forefathers and mothers of their favored art form. This homage features five vocalese pioneers, each of whom helped to invent the bop-vocal or ‘vocalese’ art form. Six-time Grammy nominee Mark Murphy (1932–2015), considered one of the most influential vocalists in jazz, appears on four tracks, including an outstanding new version of Freddie Hubbard’s “Red Clay,” a song which stands very tall among Murphy’s many breakthrough recordings. Four of the ‘Bopsters’ – NEA Jazz Masters and Grammy Award-winners Jon Hendricks (b. 1921) and Annie Ross (b.1930) who represent two thirds of the pioneering vocalese group Lambert, Hendricks & Ross; NEA Jazz Master Sheila Jordan (b.1928); and Arkansas Hall of Famer and Schoolhouse Rock mastermind Bob Dorough (b. 1923) have one feature track on this recording.

“If this disc featured just the quartet, it would be sensational. The addition of the icons all in remarkably fine form, escalates it from valuable to priceless from piquant to landmark…” – Christopher Loudon Jazz Times. 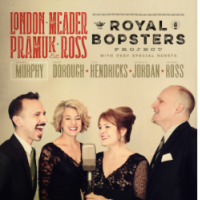 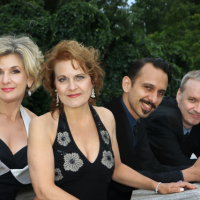 All About Jazz musician pages are maintained by musicians, publicists and trusted members like you. Interested? Tell us why you would like to improve the The Royal Bopsters musician page.