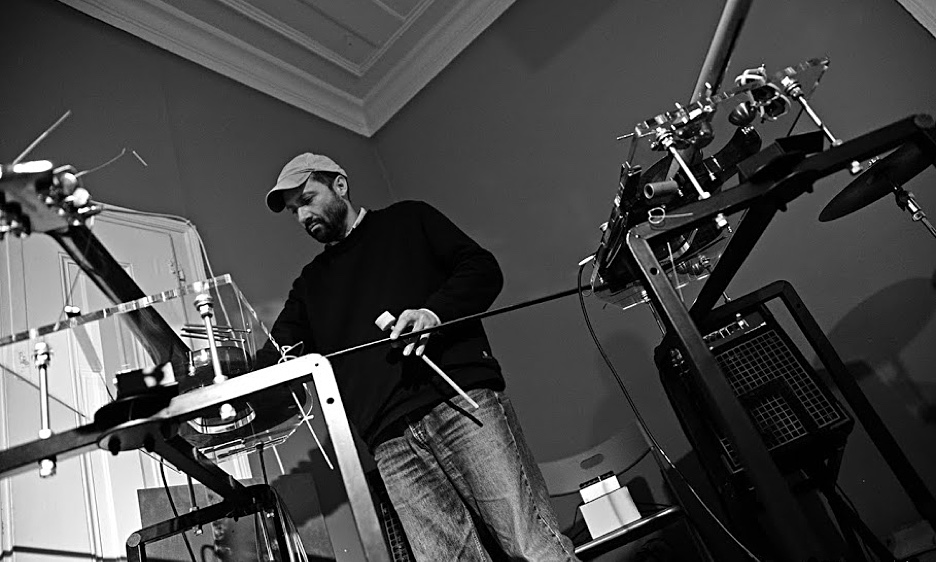 By KARL ACKERMANN
June 6, 2019
Sign in to view read count

For some reason, I try to make my guitar not sound like a guitar. That might denote a certain rebellious disposition. On the other hand, so-called, experimental music can be dismally conventional. &#151Abdul Moimême

The newly opened Théatre des Champs-Elysées was sold out on the night of May 29, 1913. The well-heeled Parisian audience had come to enjoy the much-anticipated premiere of Igor Stravinsky's "Rite of Spring" which featured the choreography of the acclaimed Russian ballet dancer Vaslav Nijinsky. Some accounts of what transpired that night appear to be exaggerated. There were no riots in the street outside the theater, as had been reported, but there was considerable violence in the theater as fans and detractors went at each other with walking sticks and fists. One audience member was said to be stabbed with a woman's hatpin and the police arrested dozens of audience members at intermission. The dissonance, odd rhythms and lack of other familiar points of reference caused outrage among many in the audience, as did the accompanying ballet which featured a staged human sacrifice. As a performance art package, "Rite of Spring" seemed to have something to offend almost everyone and it wasn't performed again for twenty years. In retrospect, it was viewed as a work ahead of its time with Walt Disney using part of the score in his 1940 release of Fantasia. In the jazz world, Hubert Laws, Ornette Coleman, Alice Coltrane and The Bad Plus have adapted passages from the score.

Since early man banged sticks on rocks, the history of music has been one of innovation, and innovation does not exist without experimentation. And low or high technology, experimentation has remained a constant—if sometimes, unwelcomed—aspect of music. The body-slaps of drum-less slaves, the comping of early blues guitarists, left-hand walking bass lines on the piano were innovations developed for an earlier purpose; amplification, or fill, for lacking instrumentation. "Experimental" as a multipurpose label, is often used as a proxy for work that is pioneering, progressive, radical, or simply just so beyond the conventional norms that there is no convenient epithet to apply. Experimental music has been described as any music that pushes the boundaries of conformity; or, as music written with no prescribed end result; obscure and without intention. Harmony, melody, and continuity may be considered extraneous. It may, or may not, be created for the listener's entertainment. Composing can be more related to direct sounds than musical tones. Everything is what it is, and the artist's freedom of expression is the only driving force. Like the flexible definitions of jazz itself, the descriptions of experimental music exist in a limbo where they are affirmed, disputed or ignored. It can be reasonably argued that all music is experimental and that no music is experimental, but that's debate is for another time.

Half a century before John Cage's revered and reviled "4' 33" appeared, Alphonse Allais' "Funeral March for the Obsequies of a Deaf Man" (1897) was the first known composition of complete silence, comprising of twenty-four blank measures. French composer Erik Satie was among the early modern composers to push beyond conventional tonality, employing unusual scales and pitch; techniques furthered later by Claude Debussy. The influence of Debussy has been cited by jazz composers across the entire time span of American jazz, including Bix Beiderbecke, Duke Ellington and Branford Marsalis. But to talk about music as "experimental" requires framing the genre based on arbitrary and sometimes ambiguous criteria. Music that uses unconventional instrumentation, extended techniques and untraditional composing processes, are fundamental to the broader discipline. Other explanations talk of removing the human element from the composition method so deeply-rooted social norms are not influencing the creative process. If composing in a subliminal state seems counter-intuitive, it partially explains why the "experimental" label is untenable.

Individual instruments are often the platform for experimentation, and sometimes, necessity was the mother of invention. Charlie Parker and Ornette Coleman both played plastic Grafton saxophones for a time, only because neither could afford the brass instrument. Digital interfacing of instruments is widespread and "prepared" instruments are used across much of the Western instrument families. Pauline Oliveros, an early pioneer in experimental electronic music, applied similar principles to her accordion music. On Accordion & Voice (Important Records, 2014) her instrument is customized with an unusually large sound chamber, multiple processors, pitch-blending pedals and an extended bass range. Some experimenters look to the periphery of the music for inspiration. Àine O'Dwyer has recorded on pipe organ in the depths of a cave, and in a church, where she incorporated the sounds of the cleaning crew at work, on Music for Church Cleaners Vol. I and II (Mie, 2015). Making the environment part of the musical experience has appealed to many progressive artists. The acoustic properties of churches and cathedrals have long been a draw in that regard. Trumpeter Susana Santos Silva recorded All the Rivers—Live at Panteão Nacional (Clean Feed Records, 2018) playing the album's one extended solo piece to the alcoves and fissures of Santa Engrácia's Church in Lisbon. The physical settings for experiments run from the small—a trumpet bell submerged in a bucket of water—to the very large, as in a solo drum kit recording in an airplane hangar. Performance art/multi-media presentations utilize the environment in a different way. Cornetist/electronic artist Rob Mazurek created an avant-garde score within his own visual art exhibition on Marfa Loops Shouts and Hollers (Harmonipan, 2018), and Darcy James Argue's Secret Society, on Brooklyn Babylon (New Amsterdam Records, 2013), accompanied graphic artist Danijel Zezelj as he painted—and un-painted—a massive mural of the Brooklyn Bridge, on stage.

I interviewed three visionaries, with different, and important, ideas about creativity. Adam Berenson worked with Paul Bley and Cecil McBee as a student of the New England Conservatory of Music where he earned a Master's Degree in Jazz Studies. The Philadelphia-area pianist and composer cites influences as diverse as Frank Zappa, Beethoven, the Beatles and Ornette Coleman. He composes and performs across a wide range that includes jazz, classical, avant-garde, noise, and electronic music. Outside of music, Berenson has been a correspondent for the international publication, Pulse! Magazine and a contributor to the Philadelphia Weekly newspaper. He is an instructor at the prestigious Settlement Music School in Philadelphia. Besides his NEC degree, Berenson holds a BFA in film production from the Tisch School of the Arts at NYU.

Dana Jessen is to the bassoon what Satoko Fujii is to the piano; she might play that difficult instrument without its reed, or the reed alone. Electroacoustic music is often part of her repertoire. She has performed with Anthony Braxton's Tri-Centric Orchestra and holds advanced degrees in Bassoon Performance from the New England Conservatory of Music and Improvisation from the Artez Hogeschool voor de Kunsten in the Netherlands. On her solo album Carve (Innova Recordings, 2017) she moves through an array of pieces that are sinisterly blue, threatening, melodic, abstract or methodological.

Lisbon native Abdul Moimême is primarily a guitarist, but a saxophonist, architect, and writer as well. As a guitarist, he is often far outside the realm of conventional composing and playing. Some of his music may be characterized as pliable harshness; grating and biting, but filtered through electronic and percussive effects and bowed strings, creating music that exists in uncharted territory. Whether he is steeped in electronics or leaning toward the more natural character of instruments, there is an ethereal quality to Moimême's music.

To set the table for this conversation, I asked each creative artist to describe their early experiences with composing, and what or who influenced their early career.

Adam Berenson: "It remains a source of fascination to me that, practically, my first instinct within the domain of music was to compose. I was given a clarinet to play (or perhaps I chose it) at the too-young-age of 7 or 8. The instrument was technically too difficult for me, but I distinctly remember composing something as soon as I had learned to play, perhaps, 3 pitches. And I remember that I called the piece "Circle Music" or "Center Music." I wish I still had it, as I believe it would reveal a lot to me about myself. There's almost something Platonic about the title. I think we need to take those earliest instincts very seriously. They are pure, and not yet impeded upon by social reality. Paul Simon once said that his career was the "idea of a 5-year-old." This should be the case for most of us. My earliest influences would have been popular songs heard on the radio: the singer/songwriters of the 1970s."

Dana Jessen: I began improvising when I was a graduate student at New England Conservatory. I was attending NEC for a Master's degree in bassoon performance (the classical division) but was really interested in contemporary classical music and improvisation. NEC's Contemporary Improvisation division was really welcoming to me and allowed me to join some of their ensembles. The first CI ensemble that I was part of was led by Joe Morris, a fantastic mentor to me and also an Albert Ayler expert. So some of my first influences within the improvised idiom came from the music of Albert Ayler. I found there to be a raw, incredibly emotional, quality in his music that deeply resonated with me. NEC was a great place for me to be studying at that time, primarily because it introduced me to all sorts of improvised music. I took classes with people like Joe Maneri and was coached by Anthony Coleman, Joe Morris, and Stephen Drury. This really helped me to identify what I wanted to do artistically. After my studies at NEC, I ended up moving to Amsterdam to further study contemporary and improvised music, and it was here that I really took improvisation seriously and began to shape my voice as an artist. My mentors during this time included: Wilbert de Joode, Frank Gratkowski, Wolter Wierbos, and Michel Braam. Since I was equally playing improvised music and contemporary classical (composed) music, much of my early influences came from artists and music within both these idioms. These include all of my mentors previously mentioned, Albert Ayler, the Art Ensemble Of Chicago, Roscoe Mitchell, Ornette Coleman, the ICP Orchestra, Meredith Monk, Anthony Braxton, Sofia Gubaidulina, Stravinsky, György Ligeti, Michael Gordon, Bang on a Can, and probably many more that I'm forgetting. It's a pretty wide- ranging list but these are some of the artists that I remember listening to when I first started working artistically as a composer-performer.

Abdul Moimême: The word 'influence' unsuspectingly insinuates the gravitas of a legacy. So, I'm wary of acknowledging any immediate precursor. But the question invariably reminds me of having asked bassist Barre Phillip the same question, while attending a memorable performance of his, where he played alongside violinist Carlos Zingaro, in Lisbon, back in 1980. I was perplexed with his answer. Instead of conjuring a list of outstanding names, Mr. Phillips invoked the most commonplace experiences such as the rising sun, or the rustling of leaves in the wind, etc. His words had a sobering effect. Nonetheless, playing with Ernesto Rodrigues, as well as the other inspiring musicians which constitute Lisbon's small, yet robust, Free Improvisation scene was essential for my development as an improviser, as well as a listener.