In 1958 Joe finished ten years of study with Joseph Schmid, a student of Alban Berg, completing Schoenberg's harmony, counterpoint and composition courses. Joe went on to teach harmony, 16th century counterpoint and composition at the Brooklyn Conservatory while continuing to compose and in 1963 was commissioned by Erich Leinsdorf of the Boston Symphony Orchestra to write a piano concerto. It was premiered in 1985 by the American Composers Orchestra at Alice Tully Hall. As a soloist in the 50's and early 60's he performed Greek, Syrian, Jewish and Turkish music on clarinet and saxophone as well as pop music of the day. In 1965, his reputation as a diverse performer led to an invitation to be the saxophone soloist in the premiere of a composition by David Reck dedicated to Ornette Coleman. Joe premiered the piece as part of the 20th Century Innovation Series conducted by Gunther Schuller at Carnegie Hall.

Also in 1965, encouraged by his friend and drummer Peter Dolger, Joe recorded an album with drums, bass, piano, clarinet & saxophone. His written tunes and subsequent improvisations contained elements of jazz, Greek melodies and rhythms, and twelve-tone compositional ideas. The album was recorded for Atlantic but remained unreleased until 1996, when John Zorn heard it and enthusiastically issued it on his Avant Label under the title “Paniot's Nine”. Paniot pays homage to Joe's friend who inspired the making of this record.

In 1970 Joe became a faculty member at the New England Conservatory, teaching harmony, counterpoint, composition, saxophone, improvisation and later microtonal theory and composition. He served as president of Pi Kappa Lambda Honor Society at the Conservatory and co-founded the Enchanted Circle Series with James Hoffman. For over thirty years, this performance series produced up to seven concerts a year dedicated to presenting new music, especially the music of New England Conservatory recent alumni.

Joe became interested in microtones early on; he began using them in compositions in 1970. In 1979 Joe started a microtonal theory and composition course at the New England Conservatory. Students in Joe's microtonal class learn to hear, sing, play and write in 72-note equal temperament, using as their text Preliminary Studies in the Virtual Pitch Continuum, co-authored by Joe and Scott Van Duyne. This class, unique in the United States, became a smashing success, with a national reputation and frequently overflowing enrollment. Many of Joe's students have gone on to international careers as performers, composers, and educators in all fields of music. Joe has created charts with alternative saxophone and clarinet fingerings and he encourages other instrumentalists to find fingerings and write charts as well. He has lectured on microtonal composition at institutions such as NYU, Harvard University, and in Salzburg at the Mozarteum. He also invented a 5-octave, 72-note-to-the-octave electronic keyboard which he has used in performance and in class. It was displayed at the Boston Museum of Science in 1990.

Overwhelming interest in this class led to, in 1988, the founding of the Boston Microtonal Society, a non-profit organization promoting the study and performance of microtones. It produces concerts in Boston and New York City, is a licensed publisher, and awards the Jonathan Keith memorial scholarship every year to an NEC student who shows achievement and dedication to microtonal study. Joe's former composition student and the Boston Microtonal Society Director, Julia Werntz, has written both her doctoral thesis and an article in Perspectives of New Music (Vol. 39, No. 2) comparing equal temperament added notes with alternative tunings in microtonal composition and discussing Joe's music.

Recently Joe's career as a player has flourished. In 1995 his first album as the Joe Maneri Quartet was released featuring Mat Maneri on violin, John Lockwood on bass, and Randy Petersen on drums. Over ten subsequent albums have been recorded and released on Leo Records, HatArt and ECM records. Many have been lauded in Downbeat and Jazz Times magazines as well as in European periodicals. Articles praising the group and Joe appeared in the New York Times, by David Wildman for the Boston Globe and by Gary Giddins for the Village Voice.

Their recent record, “Tales of Rohnlief”, is a trio featuring Mat Maneri on viola and Barre Phillips on bass, released on ECM records. In May 2002, the trio toured France for three weeks. Here in North America Joe has appeared in the JVC Jazz Festival NYC, the Vision Festival NYC, the Chicago Cultural Society Series and the Montreal Jazz Festival.

A Celebration of the Life of Joe Maneri 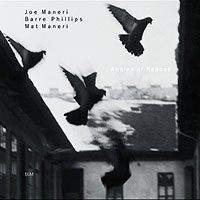 All About Jazz musician pages are maintained by musicians, publicists and trusted members like you. Interested? Tell us why you would like to improve the Joe Maneri musician page.