By GEOFFREY WILLS
September 15, 2015
Sign in to view read count
The following is an excerpt from "Chapter 2: Early Encounters with Jazz" of Zappa and Jazz: Did it Really Smell Funny, Frank? by Geoffrey Wills (Matador, 2015). 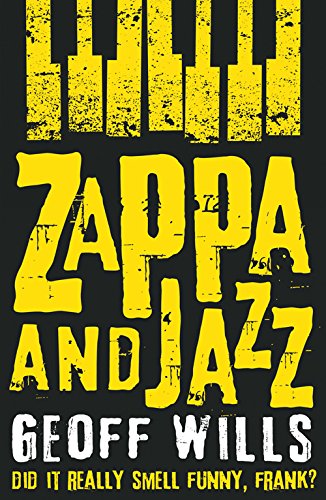 When, at the age of fourteen, Zappa entered Mission Bay High School in San Diego in 1955, his first exposure to the elitist snobbery of a certain type of jazz fan occurred. It was like a red rag to a bull, and was no doubt the source of all his later caustic comments about jazz. He recounted the experience in an interview with Dan Forte in Musician magazine in 1979: ..."at the time I was down there, there was a real definite division between the people who liked rhythm and blues and the people who liked jazz... The people who liked jazz would always go around putting you down..." These people were fans of West Coast jazz, at the time at the height of its popularity, and exemplified by Howard Rumsey's Lighthouse All-Stars and Shorty Rogers and his Giants. Unfortunately, Zappa's ire at mindless adherence to a fashion spilled over onto the music. He commented... "to me, there wasn't that much emotional depth in listening to something like "Martians Go Home" by Shorty Rogers—that kind of stuff. It was just bleak."

Was Zappa being disingenuous here? "Martians Go Home" is not bleak—it is a piece of quirkily mischievous, Basie-inspired, small-group swing. Interestingly, Rogers, like many West Coast jazz musicians, also had a foot in the rhythm and blues camp. He supervised recording sessions by doo-wop groups and formed a publishing company with singer Jesse Belvin, publishing the latter's hit "Guess Who" (Rounce, 2004). Under the name Boots Brown and the Blockbusters he recorded a series of rhythm and blues instrumentals and reached number 23 in the charts in 1958 with "Cerveza" (Myers, 2013). It is not stretching the imagination too much to suggest that Rogers was the type of person that Zappa later sought to emulate when he worked with Paul Buff at Pal Studios in the early 1960s, where they produced rock instrumentals and used group names like The Hollywood Persuaders and The Rotations.

Jazz fans could be bigoted and snobbish. So could certain jazz musicians. On the other hand, many were prepared to be open-minded about different types of music. They were not all haters of rhythm and blues.

Johnny Otis, who, as Barry Miles states, Zappa first met in 1958 on a visit to his studio, was another musician whose feet were in the camps of both jazz and rhythm and blues. He had early associations with jazz, having played drums with Lester Young, Illinois Jacquet and (at least according to Tom Lord's 2004 Jazz Discography) Stan Kenton. His experiences are recounted in his 1993 autobiography. Fans created rigid categories, but for the pragmatic musician, the boundaries between jazz and other types of music were much more fluid. Session bassist Carol Kaye, in a 1998 article in Downbeat magazine, admitted that although "rock and roll was a dirty word among L.A. bebop musicians in the late 1950s... if it hadn't been for the huge hidden jazz influence in the 1960s hits, that musical era might never have happened..."

As described in the 1979 Musician interview, Zappa's first encounter with bebop was not a positive one. He said, "I didn't hear any bebop until I moved away from San Diego, and moved to Lancaster and I came across a Charlie Parker album. I didn't like it—because it sounded very tuneless, and it didn't feel like it had any balls to it." He confirmed these early impressions in later interviews: in "The Mother of All Interviews" (Menn, 1993) he said, "I didn't like Charlie Parker. I didn't like some other modern jazz things. Listening to these things, I would go, 'Why do people like this? I don't understand it.'" And in the Zappa Late Show Special on BBC 2 TV in 1993, in his interview with Nigel Leigh he said:

"I'd come into contact with Charlie Parker records and things like that, but they didn't hold my interest. I couldn't follow it. Same kind of argument that you'd get from people today: 'What are they doing? They're just noodling around,' you know. I mean, now I understand why they're noodling and where they're noodling and I can tell the difference between good noodling and bad noodling, but without certain musical clues, it just all sounded like noodles to me."

Zappa was only fifteen when he first encountered Parker's music. In "The Mother of All Interviews," he described how and why he struggled to understand and appreciate certain pieces of music, for instance "Chronochromie" by Olivier Messiaen:

"It's just that the more I learned, the more interesting it became, because at the time I was exposed to this kind of music, I didn't have a classical education. I was just a guy buying records. Everything that I liked was based on my gut reaction to what was on the record. For some reason I liked Varèse right away. I liked Stravinsky right away, but these other things not... when you start learning about structure, when you start learning about how these things work, then you can appreciate how other people deal with the material... the more I learned about what the rules of the game were, the more I could appreciate how other people might solve the problem."

Although he did not clarify this, it seems not unlikely that the more Zappa learned about music, the more his appreciation of Parker, like that of Messiaen, grew. His initial dislike of Parker may have been partly connected to aversive experiences with bebop-loving jazz snobs, in contrast to his reaction to the music of Varèse, as he said in the BBC 2 Late Show Special:

Contrasting with jazz snobs, Varèse, with his "really mean" chords, loud drums and (according to The Real Frank Zappa Book) mad scientist looks, could express Zappa's teenage angst brilliantly, and was probably a perfect alternative to his father.

Despite his initial negative reaction to bebop, Zappa continued to explore jazz and invested in albums by Oscar Pettiford and Charles Mingus, according to the 1979 Musician article. He thought Pettiford was good, and really liked Mingus. He also liked Thelonious Monk, Eric Dolphy and Harold Land. These were not musicians that the casual fan would be familiar with—Zappa was obviously taking a serious interest. And all the jazz musicians that he professed to like had moved through the bebop experience to develop their own music. Ted Gioia (1992) states that "the music [Dolphy] was playing on gigs in the mid-1950s was... closely related to the bebop idiom." Pettiford, Mingus and Monk all played with Parker at different times. In Lancaster, Zappa became a student at Antelope Valley High School, and, as Barry Miles (2004) describes, he explored its record library. Here he became familiar with albums by Ornette Coleman and Cecil Taylor, and later developed a liking for the Oliver Nelson album Blues and the Abstract Truth (1961), featuring Eric Dolphy. He became a jazz autodidact, in the same way that he taught himself about twentieth century classical music.

Zappa referred to another jazz album that he was familiar with in a 1967 interview with Frank Kofsky. He was asked if he listened to John Coltrane and he replied, "Well, I don't own any Coltrane, except he's one artist on the anthology album that Tom Wilson produced in 1950 [it was actually 1957]. The one that has Cecil Taylor and Sun Ra. It's called Jazz in Transition—it's a classic."

This album features Sun Ra and Cecil Taylor at relatively conventional stages in their careers, and John Coltrane in a mid-1950s hard bop setting reminiscent of his Blue Train session. Other tracks include one with Donald Byrd, featuring Horace Silver and Art Blakey, and Boston groups led by Dick Wetmore, Jay Migliori and Herb Pomeroy (the album was recorded in Boston to showcase Wilson's Transition label). So here was Zappa enthusing about an album containing a mixture of 1950s modern and early avant-garde jazz.

Zappa was on his own ceaseless personal, private quest to gather knowledge and information that would feed into his unique vision—the Project/Object, the overall concept of his work in various mediums, with each project connecting to a larger object. It appears that he made regular "research trips," exemplified by his visit to Johnny Otis's studio in 1958, and, having discovered Miles Davis ('I really liked his music,' he said in a 1984 RockBill magazine interview with Robert O'Brian), he went to see him play at the Black Hawk in San Francisco. Sadly, when Zappa introduced himself to Davis, the latter turned his back—typical Davis behaviour that consolidated Zappa's experience with the San Diego jazz fans and undoubtedly increased his misgivings about certain aspects of jazz. "I haven't had anything to do with him or his music since that time" said Zappa. But at least he did admit that he had liked Davis's music (incidentally, although Zappa described the meeting as happening in 1962, there is no record of Davis appearing at the Black Hawk in that year, so it was probably the previous year, when Davis's historic Friday Night/ Saturday Night at the Blackhawk albums were recorded).

It is interesting to speculate about other research trips that Zappa might have made. As Vladimir Simosko states in his 1974 biography of Eric Dolphy, the Ojai, California, Festival in 1962 featured Dolphy playing Varèse's 'Density 21.5,' and other performers included Cathy Berberian and Luciano Berio. Compositions by John Cage and Thelonious Monk were played. This is the sort of event that Zappa might have attended but not talked about. Certainly, Zappa associates like trumpeter Malcolm McNab were involved in the Ojai Festival during the early 1960s. McNab discusses this in the notes for Wazoo (2007). Interestingly, Zappa had Cathy Berberian in mind as a singer when he wrote a piece of music in 1968 entitled "Music for the Queen's Circus" which later became 200 Motels. Zappa's widow Gail discussed this at a talk given prior to the 2013 London performance of 200 Motels (Greenaway, 2014).