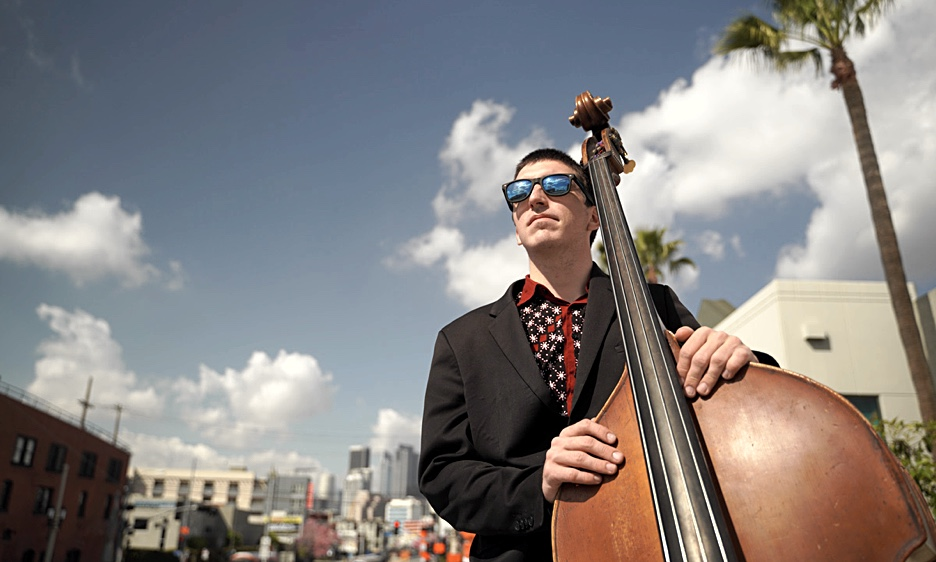 Born in Southern California, Will began studying cello when he was three and also played drums, guitar, piano and percussion, taking up the electric bass at the age of 12. "I had aspirations to become a producer and I originally went to Berklee for musical production, but during my freshman year I heard Paul Chambers and decided that that was what I wanted to do." After graduating, he toured Japan with drummer Billy Kilson, resettled in Los Angeles, and has since worked with many top artists.

L.A. Source Codes, his recording debut as a leader, teams the bassist with three generations of musicians. Two great veterans, pianist Jon Mayer and drummer Roy McCurdy, are featured on "Be My Love" and a sensitive version of "Two For The Road." The quartet, with tenor-saxophonist Bob Sheppard, pianist Mahesh Balasooriya, and drummer Marvin "Smitty" Smith, plays high-quality modern mainstream jazz on Cole Porter's "So In Love," Grant Green's medium-tempo blues "No. 1 Green Street," "I Believe In You," a song Lyle has loved since hearing the Frank Sinatra/Count Basie recording, and "Forasteira," (meaning "outsider" in Portuguese), one of four originals on the self-produced album.

My two main instruments are upright and electric bass. I also play guitar, piano, and basic drums. I enjoy singing and working on my vocal ability.

First and foremost, my biggest teachers and influence in my life are my father, Bruce Lyle, and my mother, Corinne Nevinny. Both supported my ambitions and were fantastic role models from day one.

My first music teachers were Carol Rice (cello) and Vivian Chen (piano). My most influential teachers in my formative years were Gabe Rosales and Darren Wilsey, Gabe is unbelievable electric bassist who taught me about RnB, funk, basic jazz music, and various music from around the world. Darren is a classically trained guitarist who went to my alma mater (Manhattan School of Music) and these days is mainly a composer, producer, and arranger. When I went to college, I encountered my mentor in jazz music, Ralph Peterson Jr. Ralph was a legend of jazz drumming and had taught generations of jazz musicians. I really miss him since he passed this year, and the album is dedicated to his memory. I went from knowing very little about swinging in a straight-ahead context to eventually touring with his band. I also encountered other great teachers such as Billy Kilson (who I also ended up touring with), Neal Smith, Ron Mahdi, Susan Hagen and Dave Santoro.

When I got to LA, I studied with John Clayton, Bert Turetzky, Steve Dress, and learned a lot watching my slightly older contemporary, Mike Gurrola. My current teacher who has given me boundless inspiration and I believe has changed my playing, outlook, and life, is maestro Ron Carter. I could speak volumes on how much Maestro has helped me. Maestro, if you ever read this, please know I am grateful and honored each time I get to play for you and hear your suggestions!

There are of course countless non-jazz influences I could name, but we'd be here for a long time!

Tackling the Monster featuring Wynton Marsalis and Yo-Yo Ma on repeat. I loved classical music, but this was the first time I heard jazz and became aware of composers like Duke Ellington. Mr. Marsalis was so knowledgeable and committed, and Mr. Ma's passion for expressing himself on cello shined through. Their joy was obvious even to a three-year-old kid like me. I had a relatively normal childhood and was never a prodigy or a dedicated practicer at that age, but music kept re-appearing in my life in different contexts and eventually I naturally chose to pursue it. In a crazy turn of events, I eventually ended up telling Mr. Ma in person about how that VHS tape changed my life when I randomly encountered him in a hall at Juilliard after I auditioned there.

I love this question! I've heard from many sources that jazz musicians must have one foot in the past and one foot in the present (or future, depending on who you talk to!) I also believe jazz (and any good music) unites the beautiful and the ugly parts of ourselves, the human and divine, elegant and profane, and so on. I think good music inspires feeling as well as thought from the listener. We must entertain as well as challenge and question. But most of all, we have to enjoy what we do and do it with conviction.

I consider my sound to be an amalgamation either consciously or subconsciously of people I like to listen to.

I'm a huge believer in teaching the student themselves, not simply the material. Each person must be dealt with on a case-by-case basis. Usually I find students to have individual strengths and weaknesses. It is my job to give them work which strengthens that which they are comfortable with, as well as work which highlights their shortcomings. I always learn from my students. My teacher Ralph had a no-nonsense approach of honesty, objectivity, and dedication to jazz which I felt was enormously effective.

Today, who would my dream band be? It's tough to say because sometimes people are different when you play with them as opposed to hearing them on a record. You can also compile a star-studded group of the most "killing" players, but that still won't necessarily make the best band. Certain bands are what they are because of their B and C list personnel, in my opinion. I definitely got some of my dream band on this record.

I'll leave out anyone I've previously worked with for this answer. Maybe if we're being hypercritical, for piano I'd choose Geoff Keezer, Mike LeDonne, or David Kikoski. For trumpet, I love Jeremy Pelt. I'd call Victor Lewis or Tain on drums. For saxophone, maybe Joel Frahm, Bill Pierce, Mark Turner, or Eric Alexander. For guitar, I like Peter Bernstein, Lage Lund, or Jonathan Kreisberg. Once again, I realize that these are all very contrasting players so the personnel would be case-sensitive.

My best experience would probably be Billy Kilson's tour to Japan in 2017. I met so many amazing people and played for wonderful audiences. It's also where I met my girlfriend, an amazing woman, jazz singer, and drummer and proud mother, Kana Tezuka.

My favorite venue in the world to play was probably Mr. Kelly's in Osaka, Japan. It had the feeling of a true jazz club and it was wild seeing the wall of photographs they had of all the artists who played there. The club is attached to a hotel where the artists stay, so it's the easiest load-in and soundcheck ever. Hope I can go back one of these days!

My favorite recording is easily this one because I believe it showcases what I have to offer. It addresses straight ahead, avant-garde, contemporary, bluesy, and Latin sides of my playing. I also was able to juxtapose the players and content I wanted on the album to my liking and I was happy to be able to do that.

I think it's a combination of commitment to straight-ahead jazz tradition while maintaining openness to all styles of music, and having a broad yet informed musical conception. I try to put meaning and emotion into every note I play, and while I feel I often fall short of this, I record nearly all of my performances and ruminate on how they could improve. I also think my personality, experience performing and studying with those I mentioned, and upbringing, contribute towards what I do in a positive way.

I went to Berklee originally to DJ and produce music and released my first commercial work as an EDM artist at the age of 17.

Paul Chambers' Bass on Top, but my earliest jazz recording memories are Kind of Blue by Miles Davis and Time Out by Dave Brubeck.

All things exist in duality. With the current pandemic and difficulties facing the entertainment industry, there is contrastingly enormous opportunity, perhaps more than ever, afforded to us due to the universality of the Internet. As a young millennial I see lots of people discovering and pursuing jazz and often playing on high levels. I'm not sure if the jazz meme culture is constructive, but it's entertaining.

Jazz needs an audience receptive to the music, dedicated elders who are committed to educating their successors, and young people who are serious about following in the footsteps of the masters but who can also develop their own voice and exhibit a unique perspective.

I would really like to do a bass-feature EP. This album wasn't really bass-centric so I'd like to do one with that approach. I am scheduled to play a jazz festival in Michigan in July with my colleague and best friend, the gifted pianist Bijan Taghavi. He's younger than my younger brother but plays well beyond his years. The great Randy Napoleon, former member of Freddy Cole's band and the Clayton-Hamilton Jazz Orchestra, is scheduled to join us on guitar.

My greatest fear would probably be playing unmusically or ignorantly. I also fear playing something I didn't mean to.

I would like "Goodbye" by Gordon Jenkins. It could be a vocal or instrumental version. I love the lyrics and harmony of that song and is indeed quite somber for a funeral. Afterward, however, maybe I could have a more lighthearted song played to lift everyone's spirits.

I am fortunate to be playing, teaching, and studying full time!

Possibly a chef or graphic artist. I love food (a distant second to music). I don't consider myself particularly visually gifted but I enjoy working on graphics for fun sometimes.

I'd say Art Blakey because of how he comes across in interviews. I feel like he'd have amazing pearls of wisdom and great stories, interspersed with bouts of charming unpredictability.

I love Modelo Especial or a beer from Guatemala called Famosa. For wine, can't go wrong with Grüner Veltliner.