Jon was born in New York City in 1938. There was a piano in the family apartment as his mother studied classical music and practiced as he went to sleep each night. He was exposed to jazz at an early age through recordings around the house of various big and small bands. Jon heard Charlie Parker play on a JATP (Jazz at the Philharmonic) concert recording and decided that Alto was his instrument. That lasted until the final year at the special music High School he attended. The piano became central in his life around then and his passion for the jazz being played around the city was all consuming.

The evolution continued after graduating from the famed High School of Music and Art in Manhattan(1956) and briefly attending the Manhattan School of Music. Mayer then became a regularly appearing member of the thriving NYC music scene playing with Kenny Dorham, Tony Scott, Pete LaRoca and Ray Draper. Eventually he recorded with two of the greatest saxophonists ever: Jackie McLean on Strange Blues (Prestige/OJC) and John Coltrane on a session known as the legendary “I Talk With The Trees” date and finally issued in 1990 as part of Coltrane’s Like Sonny (Roulette). He had a chance to hear, meet and play with some of the foremost musicians working in New York in this formative period. Among them were Jackie McLean, Kai Winding, John Coltrane, Freddy Hubbard, Kenny Dorham, Art Blakey, Lee Morgan, Art Taylor, Donald Byrd, Wayne Shorter, Elvin Jones, Bill Evans, Tony Scott, Booker Little, Milt Jackson, Max Roach, George Coleman, John Lewis, Jimmy Garrison and Paul Bley. He studied for brief periods with John Mehegan and Hall Overton.

1959 found Jon working in Paris at `Au Chat Qui Peche’ as part of a trio with Chuck Israels and Arnie Wise. It happened that the pianist he was working opposite was none other than Bud Powell. That summer included a night at the Blue Note with Chet Baker, Kenny Clarke and Pierre Michelot.

In the ‘60s and ‘70s, Mayer remained active, playing in both New York and Europe with the likes of the Thad Jones-Mel Lewis Jazz Orchestra, Dionne Warwick, Sarah Vaughan and the Manhattan Transfer, and writing songs recorded by Les McCann, Nancy Wilson and others.

Then due to numerous causes, he all but disappeared, entering a 13-year period of inactivity during which he rarely performed. But by 1991, Mayer was ready to return to music. He settled in Los Angeles and once again seriously pursued his career in the jazz world. People who heard him, initially with McCann’s Magic Band and as a leader, were readily impressed with his artistry, characterized by a supple and relaxed rhythmic feel and a keen sense of melodicism in his solos. Here was an authentic jazz musician, an artist who desired, as did Charlie Parker when stating his own personal goal, to play fast and clean and go for the pretty notes.

A wider range of listeners became aware of Mayer’s talents through his long-overdue debut, 1996’s Round Up The Usual Suspects (Pullen Music), a fine piano trio session with two genuine jazz giants: bassist Ron Carter and drummer Billy Higgins. Mayer followed up that dynamic premiere with the release of Do It Like This (A-Records) with guest tenor saxophonist Ernie Watts who has been performing with the pianist at such heralded Southern California clubs as The Jazz Bakery and Steamers Cafe. That was followed by the live recording Rip Van Winkle (Fresh Sound), Full Circle (Reservoir) in March 2002, The Classics (Reservoir), My Romance (Reservoir) Strictly Confidential ( Fresh Sound), So Many Stars (Reservoir) in September 2007 and Nightscape (Reservoir ) in 2009.

Mayer’s philosophy toward playing and really, his playing itself is deceptively simple.

“I’m trying to convey the emotional range and feeling that I perceived in the people that I admired when I started,” says Mayer, who goes on to name many of the very best jazz pianists: Bud Powell, Bill Evans, Red Garland, Wynton Kelly, Carl Perkins, Horace Silver. “Those are the guys who got my endorphins kicking, who opened up rooms in my psyche and made me say, ‘I want to do that.’ I think I’ve taken inspiration from them and come up with my own voice.”

Now happily married, Mayer is quite busy in Southern California, leading his trio and teaching privately. He says he’s having the time of his life.

“What’s great for me is finding new depths,” he says. “I feel like the new kid on the block and I have that kind of energy on the bandstand. It’s exciting to feel that I’m only now beginning to grow and explore my potential.” Show less

The craft of the jazz piano trio is a challenging one; and in a sea of fine trio recordings, it is hard to come by a performance that is just not merely good, as most are, but sublime. When one comes along; it is time to be excited, and So Many Stars is the one to be excited about. What are the ingredients of the perfect jazz piano trio recording? One is competent leadership, in this case pianist Jon Mayer, whose previous recordings��”My Romance (Reservoir Music, 2005), The Classics (Reservoir Music, 2004), Full Circle (Reservoir Music, 2002), and Rip Van Winkle (Blue Moon, 2000)��”have all been well-received

The craft of the jazz piano trio is a challenging one; and in a sea of fine trio recordings, it is hard to come by a performance that is just not merely good, as most are, but sublime. When one comes along; it is time to be excited, and So Many Stars is the one to be excited about. What are the ingredients of the perfect jazz piano trio recording? One is competent leadership, in this case pianist Jon Mayer, whose previous recordings��”My Romance (Reservoir Music, 2005), The Classics (Reservoir Music, 2004), Full Circle (Reservoir Music, 2002), and Rip Van Winkle (Blue Moon, 2000)��”have all been well-received. Mayer possesses a sensitive East-West balance in his music, having started in New York City and presently finding himself in sunny Southern California. While his playing is all bebop, he does combine the best of both coasts’ elements to make that bebop. A secondary essential element to the perfect piano trio recording is an empathic rhythm section. In any larger combo (quartet, quintet), the piano, bass and drums are the rhythm section. Only in the trio can the bass and drums alone be considered the rhythm section. Mayer employs the unparalleled talents of Atlanta cum NYC native bassist Rufus Reid and NYC cum Southern California native drummer Roy McCurdy. Both men have been in heavy demand in the past 20 years, having collectively played with Sonny Stitt, James Moody, Milt Jackson, Curtis Fuller, Cannonball Adderley, Bobby Timmons and Dizzy Gillespie. Mayer certainly has the juice to pull together a fine trio. A third necessary ingredient for a great trio recording is the repertoire. Mayer has chosen a bright mix of jazz standards, ballads, blues and original compositions for So Many Stars. Mayer dips into both the Great American Songbook and other jazz standards equally. For the former, the band produces airy, light-as-a-feather versions of Jules Styne’s “Never Never Land” and Cole Porter’s “All of You.” For the latter, Mayer and his stead attack Cedar Walton’s “Holy Land,” Horace Silver’s “Nica’s Dream” and Miles Davis’ “Blues By Five,” infusing them with a quiet fire and precision previously only seen in the Fred Hersch trios of the mid-1990s. Mayer’s originals also shine bright. A lengthy “Rip Van Winkle” anchors the center of the disc with a blues patina on a ballad platform. Rufus Reid is particularly effective here, delivering exacting support and inventive soloing. Reid walks, strolls and jumps with Mayer and McCurdy, performing a veritable soft shoe in time. “Bopzilla” is Mayer’s tribute to the spawn of Dizzy Gillespie and Charlie Parker, recalling an interesting combination of Bud Powell crossed with Red Garland. What a fine recording to end the year with. Visit Jon Mayer on the web.  Jon Mayer at All About Jazz.  Track listing: Holy Land; You’re My Everything; Nica’s Dream; Spring Can Really Hang You Up the Most; Jeannine; Rip Van Winkle; Bopzilla; So Many Stars; Blues By Five; Never Never Land; All of You. Personnel: Jon Mayer: piano; Rufus Reid: bass; Roy McCurdy: drums. Style: Mainstream | Published: December 12, 2007 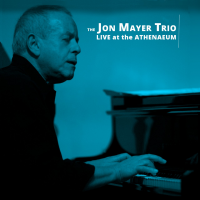 Live at the Athenaeum 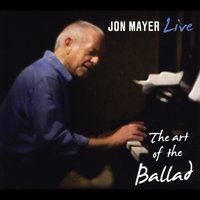 The Art of the Ballad 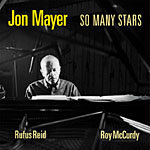 All About Jazz musician pages are maintained by musicians, publicists and trusted members like you. Interested? Tell us why you would like to improve the Jon Mayer musician page.