Four-time Juno award winner and recipient of the 2017 Lifetime Achievement Award from the Toronto Musician’s Association, Neil Swainson is among the most respected and accomplished bassists on the jazz scene today.

Born in Victoria, British Columbia in 1955, Neil discovered the acoustic bass in high school and primarily taught himself how to play. From 1975 to 1977, he toured Canada with one of the early pioneers of new age music, the flutist Paul Horn. Soon after, Neil relocated east to Toronto where for the next decade, he worked with such Canadian jazz masters as Rob McConnell, Ed Bickert, Moe Koffman and Peter Appleyard. During this time he was also the bassist of choice for many visiting American musicians including saxophonists James Moody, George Coleman, Lee Konitz, Sonny Stitt and Joe Farrell, pianists Jay McShan, Tommy Flanagan, Joanne Bracken, and guitarists Barney Kessel and Herb Ellis. Internationally,

Neil frequently shared the stage with the innovative and dynamic trumpeter Woody Shaw, touring Europe with him in 1985 and again 1987. He recorded two albums with him: In My Own Sweet Way (In’n Out), and Solid (Muse). Both Shaw and tenor sax legend Joe Henderson were featured on Neil’s 1989 debut album, 49th Parallel (Concord Records), and showcased five Swainson compositions.

Valued for his intuitive accompanying skills, harmonic depth, technical prowess and stylistic versatility, Neil also caught the ear of the great, British pianist George Shearing, who invited him to join his band. Neil appeared on over a dozen recordings with the pianist, and together they worked with Canadian composer and arranger Robert Farnon, singers Mel Tormé, Nancy Wilson, Joe Williams and Diana Krall.

From: Play On Words
By Neil Swainson

Not With A Wimp But A Banker

From: Play On Words
By Neil Swainson

From: Undertones
By Neil Swainson 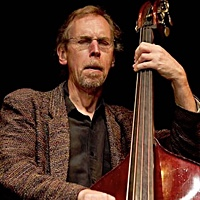 All About Jazz musician pages are maintained by musicians, publicists and trusted members like you. Interested? Tell us why you would like to improve the Neil Swainson musician page.