If there was a pianist who personified the term "Latin Jazz" it would have to be Hilton Ruiz. His knowledge, ability and technical skill in bop, blues, stride, avant garde, his innate talent for the Afro Cuban montuno,and his fusing of the genres made for a unique style that was all his own.

Born in New York City in 1952,of Puerto Rican parents, Hilton Ruiz was a piano prodigy who by the age of five was appearing on local television, playing church organ, and performing at Carnegie Hall by the time he was eight. After lifelong classical training he under took personal training under the great Mary Lou Williams. He would accredit this tutoring for laying the foundation of his musical career.

He played in local Afro Latin bands as a teen, but it would be jazz that would be his calling.While still in his teens he played with some of the best players in the New york area and started to build a strong reputation as a jazz man.In 1974, he became Rahsaan Roland Kirks' pianist, exposing him to the avant garde extractions of jazz.He performed on Kirks " Case of the 3 Sided Dream in Audio Color," and "The Return of the 5,000 pound Man." He remained and toured the world with Kirk until 1977.

He became part of the New York avant garde movement, and was also highly sought after as an accompanist for vocalists, recording sessions, and band member.

In 1975 he released "Piano Man" as his first effort as leader. This was a bop influenced session,recorded with a trio format.After many successful releases,and a transition from bop piano into more Latin flavors, in 1992 he recorded the critically acclaimed "Manhattan Mambo," which is still one of his most popular to date.On the record "Heroes,"released in 1993, he pays tribute to his favorite and influential jazz figures.

Fast forward to 2005 in which he dedicated "Stepping with TP" to his long time friend and musical collaborator Tito Puente.One of his last projects in 2006 was as pianist/arranger on the Ray Barretto "Standards,Rican- Ditioned" which was a session of Puerto Rican musicians playing jazz standards. This was to be Ray Barrettos' last record.Hilton had recorded a last album based on a New Orleans theme in 2006, but it has yet to be heard.

He would go on to record over twenty records as a leader, appear in hundreds of sessions, nurturing and developing a Latin bop style that would be his signature trademark.His collaborations with Tito Puente, and the top Latin players, established his credentials even further, and gained him a huge following in the Latin market.His involvement in the Latin Jazz world helped to broaden the appeal of the music to a broader market. He certainly was a qualified spokesman for his culture, representing and playing for us all, especially those of us in Puerto Rico who hold him in very high esteem for his accomplishments in the international realms of music.

In 1987 he co/authored a three volume book "Jazz and how to play it." Thus revealing his academic grasp of the sophisticated fundamentals of jazz.

Jazz piano has multiplied into many hybrids and mutations, and there are many pianist in any area that are brilliant. To able to master two distinct musical modes is another issue altogether. This is what set Hilton Ruiz apart from the rest.

If the ultimate achievement of a musician is to create an individual expression on his instrument,then Hilton Ruiz certainly accomplished this. 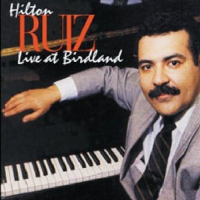 Rhythm In The House

All About Jazz musician pages are maintained by musicians, publicists and trusted members like you. Interested? Tell us why you would like to improve the Hilton Ruiz musician page.