He was an authoritative voice in Latin American piano styles, an accomplished classical player, a fine arranger, ensemble player, and an inspired soloist.. For those familiar with his work in the salsa world, the melodic and harmonic ideas explored distinguish Palmieri as one of the great creative Latino voices. His technical prowess is truly astounding, with a variety of styles represented, including tango, bolero, cha cha and of course mambo. He was affectionately known as "The Giant of the Keyboard," and he was that.

Nine years senior to his famous brother Eddie Palmieri, Carlos Manuel Palmieri was born of Puerto Rican parentage in New York on November 12th 1927. A child musical prodigy who could faultlessly copy a piece on the piano by ear, he began piano lessons at the age of six and later studied at the Juilliard School of Music. During the 1940s and '50s he worked as a sideman with Rafael Muñoz, Xavier Cugat, Tito Puente, Pupi Campo, Tito Rodriguez, Vicentico Valdés and Pete Terrace, among others. In 1948 he made eight Latin jazz-oriented recordings for the Alba label with his first band Conjunto Pin Pin featuring Sabú Martinez on conga, which were collected in the album “El Fantastico Charlie Palmieri” on Tropical Records.

Also in the Latin jazz vein, he made “Easy Does It” as leader of The Charlie Palmieri Quartet on Gone Records in 1959. Meanwhile, successful tours in the late '50s by the flute and fiddles charanga bands of Cuba's José Fajardo and Orquesta Aragón kick-started New York City's 1960- 64 charanga boom with Charlie's newly formed Charanga La Duboney leading the pack.

Charlie made his album debut with Charanga La Duboney in 1960 on United Artists with “Let's Dance The Charanga!” Charlie then took La Duboney to the Alegre label for three original and swinging volumes between 1961 and 1963. In addition he became the musical director of a series of groundbreaking studio descarga (Latin jam session) albums by the Alegre All Stars.

When the charanga fad abated in the mid-'60s, Charlie joined the "swing to brass" and replaced the flute and violins with three trumpets and two trombones to form the Duboney Orchestra for 1965's “Tengo Maquina Y Voy A 60,” on Alegre. Albums on BG, Tico, Atlantic and Mary Lou followed, but by the end of the decade, Charlie's career was in the doldrums. Tito Puente gave him a boost when he hired him as the musical conductor for his television show El Mundo De Tito Puente. When the series finished, Charlie started a parallel career as a lecturer in Latin music and culture.

Salsa had exploded on the New York scene by the early ‘70’s and his brother Eddie’s band La Perfecta had morphed into a progressive unit that would lead the way into the next decade, and Charlie went along. He played a now legendary organ solo on the classic Eddie Palmieri's '71 “Vamonos pal Monte,” on the “Harlem River Drive Live at Sing Sing” album. He played with Eddie’s band on the “Concert at the University of Puerto Rico,” and “Live at Sing Sing Vol.2.” These were heady days as the Palmieri brothers took salsa to a new level, bringing in more improvisation, and stretched out arrangements of their repertoire.

Meantime, Tico Records reactivated the dormant Alegre Records label. This placed Charlie, who had been doing small club dates, and playing with Eddie, back into the new fold to make a fine trio of albums between 1972 and 1975 with Vit�-n Avilés on lead vocals, the first of which was “El Gigante Del Teclado.” Charlie reformed his horn section to two trumpets and sax. Reflecting his jazz and descarga proclivities, Charlie's arrangements of the seven tracks left plenty of space for solos, especially from himself on piano and organ and trumpeter Alfredo "Chocolate" Armenteros. Cuban-born Chocolate has worked with a who's who of Latin luminaries, ranging from Arsenio Rodriguez through Beny Moré and Machito to Eddie Palmieri.

In the late ‘70s and early ‘80s, he divided his time between Puerto Rico and New York, but after moving to the Bronx again he formed El Combo Gigante, a Latin- jazz ensemble featuring vocalist Jimmy Sabater. After a heart attack, Charlie was told he would not regain full use of his hands, but he returned to regular performing and recording. One of the most significant occurred at the "Lo Dice Todo" concert held at New York's Avery Fisher Hall on March 7, 1977. The outstanding virtuoso performances of Cuban bassist Cachao, and Charlie, caused tumultuous standing ovations.

Following the three Alegre productions, Charlie went on to release five more albums as a leader on Coco, Alegre, and Tropical Budda between 1974 and 1984. His most ambitious album was "A Giant Step," (’84) on Tropical Budda, reviving the piano and rhythm (bass, timbales, conga, bongo) format.

In style, versatility and instrumental virtuosity, bandleader/pianist/arranger Charlie Palmieri had few equals. He passed in Sept. 1988 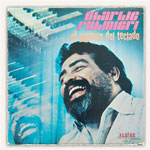 All About Jazz musician pages are maintained by musicians, publicists and trusted members like you. Interested? Tell us why you would like to improve the Charlie Palmieri musician page.