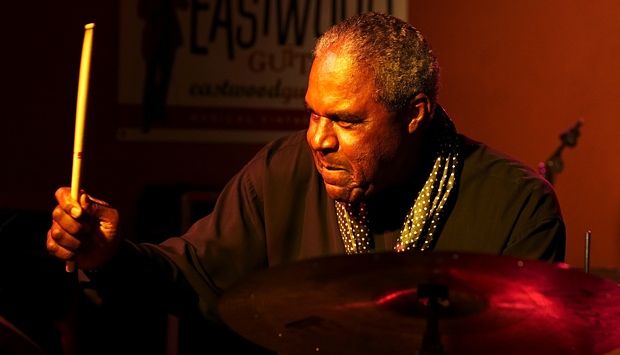 With a career that spans half a century, master drummer Michael Carvin has plenty to look back on, although he's mostly a forward-looking man. To say he's been prolific puts it mildly. By his own count, he's made some 250 recordings and toured the world five times. He has worked with such major jazz luminaries as Jackie McLean, Dizzy Gillespie, Pharoah Sanders, and Freddie Hubbard, among many others, in addition to fronting his own bands and recording ten albums as a leader. His strong influence on jazz drumming is clear through his long teaching career as well, both through the Michael Carvin School of Drumming he founded in the early 1970s and through work at Rutgers University, the University of Hartford, the New School, and elsewhere. He estimates that he's taught as many as 300 students, notably including Camille Gainer, Allison Miller, Ralph Peterson, Eric McPherson, E.J. Strickland, Kimberly Thompson, and Max Tucker.

Carvin clearly feels at home in just about any musical context, and he has a very holistic view of music, preferring not to use terms and labels that compartmentalize it. His early professional experience included stints with Motown Records and blues icon B.B. King, and he has fond memories of being drum captain in his high school marching band. In his long career in jazz, his work has ranged from the avant garde to straight ahead and much that lies in between. His own last two records albums reflect both ends of that spectrum—the explorative Lost and Found Project 2065 (Mr. Buddy, 2010) and the swinging, post-bop Michael Carvin, part of the Marsalis Music Honors Series (Marsalis Music, 2006).

The band he's formed in mid-2012—set for a major venue debut at the Jazz Standard in New York July 31 and August 1—takes on a musical approach similar to his Marsalis Music outing, but with new personnel that has an East- meets-West sort of flavoring. The quartet includes bassist Jansen Cinco, from the Philippines, pianist Yayoi Ikawa, from Japan, and tenor saxophonist Keith Loftis, who, like Carvin, hails from Texas—Dallas in his case, whereas the drummer/leader is from Houston. "The way I'm thinking at this time, I don't want to have a band full of Americans. Because that allows me to learn and to adjust. I want to help them get comfortable with their blood and their ancestors and the smell of their country. Then, they're going to play something that I've never heard." 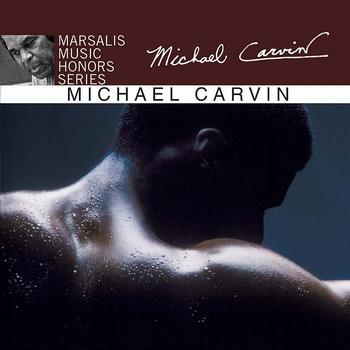 Carvin met each of the musicians in their student days and has focused on mentoring them in a number of ways. "Until you put a band together of younger cats that are unknown and you develop them, then you have a band, in my opinion. To put a band together with a lot of cats who are already established is not your band. You're just the leader on the date. There's no developing. There's no giving it up. There's no encouraging."

Jansen Cinco collaborated with the drummer on the Lost and Found Project 2065. "He's a great bassist," says Carvin. "I first met Jansen at the New School when he was 19, maybe about ten years ago. I really like him. Jansen is cool. I had him come by my drum school one day, and I said, play as fast as you can play, but relax. He got all nervous at first, but I said, man, don't worry about that. So, I taught Jansen how to play fast, how to relax and breathe and understand what breaking points are in the tempo. Because in every tempo there are air pockets. You just have to know where they are. And that's where you break your time so, for the bassist, the forearm muscles can slide. And once the forearm muscles can slide and come back, then you won't tense up." Carvin also encouraged Cinco to draw from his roots. "He was into Ron Carter, all the guys are, and I said, man, where are you from? He said, 'I'm from the Philippines.' I said, 'Well, play the bass like you're from the Philippines. You don't have Ron Carter's fingerprints. Play that Filipino feel and style. Now, he really developed that, even though we're playing in a jazz context."

Carvin first encountered Keith Loftis at a master class at Southern University. "Keith was a freshman in college. He was studying with Alvin Batiste, who is one of the greatest clarinetists and reed men." Sometime afterward, Loftis moved to New York and, by chance one day, saw Carvin walking down Broadway. He introduced himself again; Carvin gave him his phone number and told him to keep in touch. "And he would call me, and say, 'Mr. Carvin, I just finished junior year, now working on my master's, and so on. So, when I was looking for a tenor player, and I said, I'm going to call Keith. He came by my studio, and I showed him how to listen to the ride cymbal. I explained to him, get on top of my beat and ride it, man, like you're surfing. You don't have to match me. Just get on top of it and find the spot—the beat—that you like, and just ride it. And just let it be." 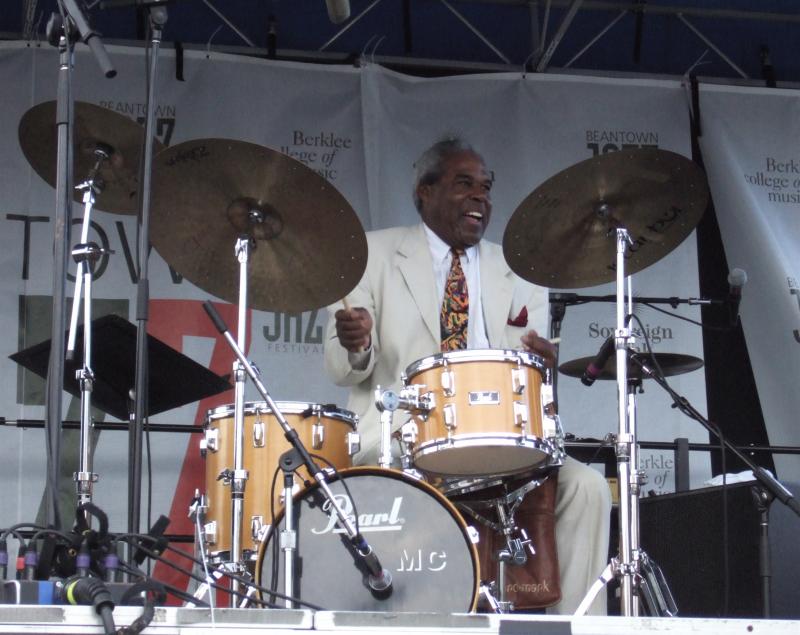 Carvin also produced Loftis's CD, Simply, Loftis (Long Tone Music, 2011), which features trumpeter Roy Hargrove, who went to high school together with the saxophonist in Dallas. "It's a good record, man. I really like it. And I'm really proud that Keith allowed me to be a part of it. Especially for one of his first major records." Carvin is very impressed with Loftis's musical development. "Keith, in my opinion, is one of the greatest horn players of the 21st century. He doesn't sound like anybody else, and that's what I really like."

Born in Tokyo, pianist Yayoi Ikawa has lived in New York for the past eight years. After finishing a Bachelor's degree at the New School for Jazz and Contemporary Music, she's now pursuing a Master's in jazz performance, composition, and film scoring. "I dig her a lot," says Carvin, "because she understands my concept. She can really get to the things that I really hear." As a whole, Carvin has high praise for the entire group and for young musicians now coming up overall. "They are great young players. But the musicians are different now. Younger guys now are really ambitious, and they are well trained—well schooled."

Carvin emphasizes both independence and collaboration in his approach. "The way I arrange my music—even if it's a standard—it won't make sense unless everybody holds their ground and plays their part. Because we are one, not four. It's four different sounds, but we are playing one rhythm. I like space. For instance, we play "I Remember April" so you can really hear the melody. I hear the horn player, in this case the tenor player, as a guy on the top of a camel as we're moving through Egypt, and he's playing what he's seeing. He's painting his picture. There are other things that are always constantly moving—the background landscape that comes from the rest of the band—but they shouldn't interfere with his journey." Visual conceptualization fits into Carvin's music other ways, as well. "When I see music, I see horizontal and vertical. The so-called front line guys, the horn players, they have to be horizontal, because that's the way the music is written. Drummers are vertical. It's like you're on a beautiful beach with your beautiful bride, enjoying yourself for a while, but then you're bored to death, because you're looking at the horizon and you don't see nothing but the ocean meeting the sky. Then all of a sudden your beautiful bride says, 'Look, there's a ship on the horizon!' And you look and you don't see it right away, but then it gradually comes in view, and there's the ship. Now it's exciting, isn't it? That's how I arrange my music. The horizontal is boring. The vertical is too strong on its own. The trick is in the mix, at the right time." 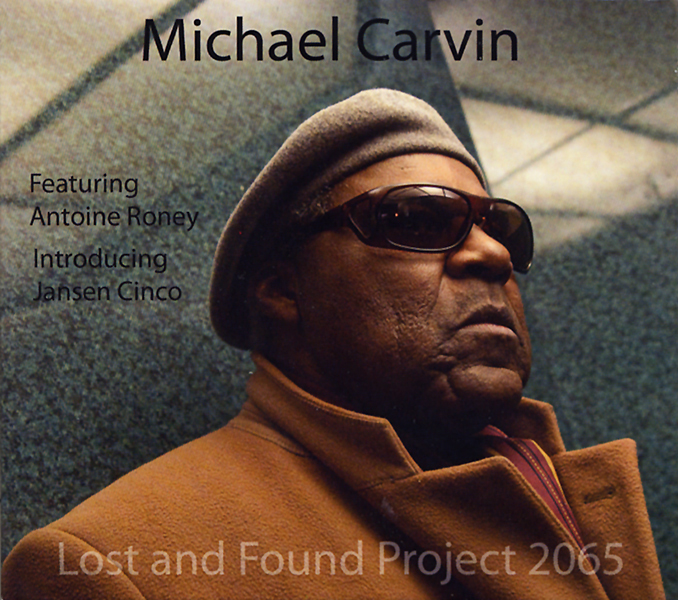 With the Lost and Found Project 2065, a trio setting with Jansen Cinco and saxophonist Antoine Roney, Carvin took a very free, conceptual approach without traditional structures in a set of seven original compositions. "We rehearsed for three days, and we never played a note. I only explained the concept. I wrote the music with no time signature and no bar lines, because I never wanted us to be at the same place at the same time, unless it happened spiritually, which I knew was going to happen, because we would be forced to crawl inside of each other and stay inside, to try to figure out where we were going and what we were doing. For a whole note on one of the pieces, under the note I wrote '500 years.' Under two half-notes, I wrote '250 years.' Jansen said, what do you mean, '500 years'? I said, 'We'll maybe you'll play the whole note for 500 years. I don't care. It doesn't matter. It's your part.'" 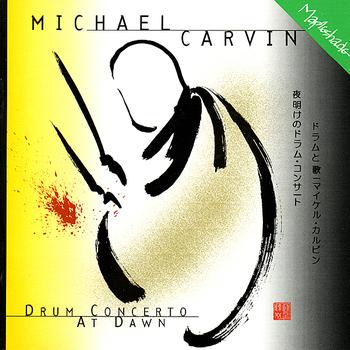 Carvin gave similar conceptual directions for Antoine Roney for the recording. "With one song, I said, 'Antoine, we're going to all be under water. And I want you to emerge first. But as soon as your head pops up at eye level I want you to hear a bullfrog.' I was trying to create different sounds that I've heard in Viet Nam and growing up as a kid in Texas. So, Antoine said, 'Well, I'm going to need another sound. The tenor is not going to work. I'm going to bring my bass clarinet.' I said, 'You have a bass clarinet?! Bring that!'" Carvin considers Roney a perfect collaborator in a spare setting. "Antoine and I have played a lot of duets together. And anytime I do anything with an experimental band, I always like to have Antoine to be part of it, because he really knows how to listen to the drums, and he knows how to play off the rhythm of the drums. We've played a long time together."