Chris McGregor: In His Good Time 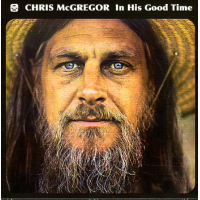 Founder of South African group the Blue Notes and, later in London, the Brotherhood of Breath, pianist Chris McGregor (born in the Transkei to Scottish missionary parents) was among the first musicians to take what became known as "township jazz" beyond South Africa, when he and the Blue Notes went into voluntary exile in 1964. Like pianist Dollar Brand (later Abdullah Ibrahim) and trumpeter Hugh Masekela, who had both left the country in the wake of 1960's Sharpeville massacre, McGregor no longer felt he could live and work under the barbarism of the apartheid regime, in which the Blue Notes' situation was exacerbated by the presence of both black and white musicians in the group.

McGregor, who died in 1990 in his adopted homeland of France, rarely recorded solo. Two albums for the French Musica label have long been collectors' items, as has In His Good Time, recorded at a Paris concert in 1977 and first released by Ogun in 1979. This reissue is the first time the disc has appeared on CD. It comes with around 40 minutes of additional material and presents the first set of the concert in its entirety, followed by five tunes from the second set. The sound, using the original analogue tapes, is excellent.

McGregor had a thick, rolling piano style, more or less equal parts jazz and traditional black South African music; like township jazz in general, his playing had the emotional intensity of African American gospel music and touched the same bases. On In His Good Time he plays a mixture of originals and traditional folk tunes, along with Mongezi Feza's "Sonia" and Dudu Pukwana's "The Bride." There is a purity—a straightforward joy—in McGregor's performances, which communicates itself powerfully. The 54-minute first set is played as a continuum, uninterrupted by opportunities for audience applause, and becomes pleasingly hypnotic.

Among the other fine recordings issued by Ogun on CD is The Blue Notes Legacy: Live in South Afrika 1964, recorded live in Durban by the classic sextet prior to the Blue Notes' departure to the Juan-Les-Pins Jazz Festival and exile.