The eclectic mix of styles has also prompted some jazz aficionados to classify the Brotherhood of Breath as jazz-rock fusion, and to place the group as a precursor to the acid jazz style. Other critics have labeled the band avant-garde and experimental, noting its affinities with the music of Ornette Coleman, Cecil Taylor, and Albert Ayler.

The linchpin of the Blue Notes and the Brotherhood of Breath was pianist Chris McGregor, who brought the initial Blue Notes together in 1960 and formed the Brotherhood of Breath in 1969. Born in 1936 in Umtata, South Africa, McGregor studied classical piano music but was more influenced by the music he heard in his father's Church of Scotland mission and by the free-jazz explorations of pianist Cecil Taylor. In 1962, he formed a jazz group to perform at the Johannesburg Jazz Festival, recruiting musicians with whom he would continue to play with in the future.

In order to hear his compositions played, McGregor formed the Blue Notes while he was studying at the College of Music at the University of Cape Town, South Africa. He received funding from the Castle Lager Brewery in Soweto, South Africa, to form a 15-piece group; the resulting ensemble evolved into the Blue Notes. The group recorded an album, Jazz: The Africa Sound, and received permission from the government of South Africa to travel to Europe.

In 1964, frustrated that they were not allowed to play in South Africa due to apartheid laws, the Blue Notes chose to stay in Europe rather than return home. They performed at the 1965 Antibes Jazz Festival in France and resided in Zurich, Switzerland, for a year before moving on to London, England. Economic realties forced some of the Blue Notes to return to South Africa or take work with other groups.

The various Blue Notes took whatever work they could find in mid-1960s London, sometimes re-forming as the Chris McGregor Group for the bandleader's regular performances at the noted jazz club Ronnie Scott's. The group proved to be quite a draw with its combination of free jazz and a form of South African township dance music called kwela. In 1969, McGregor was approached by the producers of a film based on Nigerian writer Wole Soyinka's play Kongi's Harvest. The filmmaker's initial choice, Quincy Jones, was unavailable, and Soyinka personally asked McGregor to compose the soundtrack.

McGregor went to Nigeria to immerse himself in West African music. He wound up using two Ghanaian musicians and one Nigerian drummer on the soundtrack, which helped bring McGregor to the attention of Arts Council of Great Britain. The council provided a grant to McGregor that allowed him to put together a large band, the Brotherhood of Breath. The group signed with RCA subsidiary Neon Records. Its roster included trumpet players Harry Beckett, Marc Charig, and Mangezi Feza; trombonists Nick Evans and Malcolm Griffiths; tenor saxophonists Alan Skidmore and Gary Windo; alto saxophonists Mike Osborne and Dudu Pukwana; bassist Harry Miller; drummer Louis Moholo; and McGregor on keyboard.

The band's 1971 debut album, Chris McGregor's Brotherhood of Breath, which included a 20-minute free-form jazz composition entitled “Night Poem,” was well received, as were the live performances the band managed to arrange. The number of musicians in the band, however, created insurmountable management and financial problems, and it was difficult to find promoters willing to take the financial risks necessary to hire the group.

The Brotherhood of Breath released its second album, entitled Brotherhood, in 1972. Critics considered it freer in style than the first album, and it was likewise well received. Following the album's release, saxophonist Skidmore departed and was replaced by Evan Parker. The group's reputation spread from its London home base to mainland Europe, and the musicians began to accept invitations to tour and perform. During one of these visits to the European continent, the group performed a live radio broadcast for Radio Bremen in Germany that was eventually released in 2001 as Travelling Somewhere. The recording opens with a rendition of a composition by alto saxophone player Dudu Pukwana, “MRA,” a performance of which had served as the opening track on the group's debut release. Later in the broadcast McGregor revisits his 1969 film soundtrack work with a group rendition of “Kongi's Theme.” In January of 2004, another concert recording (from 1971) was released under the title From Bremen to Bridgewater.

Brotherhood was the last studio release by the group, which disbanded in 1974 when McGregor moved to Aquitaine, France. They re-formed occasionally through the late 1970s and 1980s for festivals and one-night shows. In 1989, the Brotherhood of Breath toured with avant-garde jazz musicians Archie Shepp, and the group laid plans for a United States tour the following year. That tour was cancelled after McGregor was diagnosed with cancer.

McGregor died from lung cancer in France in 1990. A writer quoted on the website The Iceberg recalled him as “an exciting piano player whose style encompassed the power of Cecil Taylor and the gentleness of African folk melodies, but it was as leader of joyful, powerful bands that he made his main reputation.” Between 1992 and 1994, Moholo toured with other surviving members of the Brotherhood of Breath. They billed themselves as the Dedication Orchestra. Show less 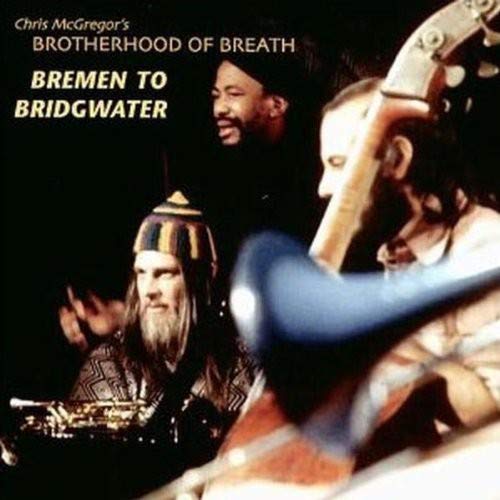 All About Jazz musician pages are maintained by musicians, publicists and trusted members like you. Interested? Tell us why you would like to improve the Brotherhood of Breath musician page.