To properly attempt to write a profile on such a colorful and significant character as Chano Pozo, we must go to Africa, where it all began.

The Niger River Delta, in the Africa Bend, more specifically the area of Calabar, was one of the premier sources of slaves during the heightening sugar production era in Cuba in the early 1800’s. The Calabar male natives, had an Egbo leopard society, which in Cuba was reborn under the name Acuabatón, conjuring up the myth of Abakuá, manifesting itself in a ritual of ancestor and deity worship, and secret initiations of brotherhood. The Abakuá in Cuba were also called ñañigos, and created a high standard as dancers and drummers, as well as for their flamboyant dress and behavior. They also were also feared and reputed to be a sort of underworld gang.

The influence of the Abakuá in the Cuban world of drumming has been profound since its presence in the traditional rumbas. In Cuba, a rumba was/is a social gathering of drumming with dancing, its origins in the cane fields, streets and barrios. A cultural diffusion with the Lucumi (Yoruba) style of drumming has evolved into the classic Afro-Cuban percussive style of guaguancó, yambú, and columbia that is eminent today. There were/are many Cuban rumberos that were members of both the Abakuá and Santeriá (Yoruba) societies.

Chano Pozo was one of these rumberos, mentioned above. He would influence jazz and popular Latin music well into the next century!!

Luciano Pozo Gonzalez was born in the Vedado section of La Habana, Cuba, on January 17, 1915. His mother would die when he was 8 years old, and his father moved to the area of Cayo Hueso, in the sector known as El África, which was a very poor and tough neighborhood. There he became step brother to Felix Chappottin, by way of his father and Chappottins mother. He did a short stint in the reform school of Guanajay, where he would meet Miguelito Valdés, as fate would have it, Chappottin, Valdés and Pozo would go on to forge a personal and musical alliance that would take them out of the streets into studios and stages around the world.

He became initiated into the Abakuá sect of Müñanga, since this society is shrouded in secret ceremony and reveal nothing, very little is known about this except for the fact that Chano was a proud member, and he also practiced Santeriá. This would manifest itself in his style of conga drumming that would be his musical identity. He worked primarily as a boot black, and played the congas whenever possible with the local comparsas, which were street musicians, mostly ñañigos, parading on patron day saints and other social activities.

By the late1930’s Chano Pozo was a well known member of Los Dandys de Belén, and had become an accomplished conguero and rumbero. In 1938 he was asked to sit in on quinto (lead conga) in a group Los Melodicos which had a choice gig at the Hotel Presidente. This led to a full blown Afro Cuban musical Batamú which played to a sold out crowd at the famed Teatro Marti. He was on his way.

There were at the time, in the 1930’s strict racial discrimination laws in Cuba forbidding black musicians to play in certain venues, and also to record. Since he was black, Pozo could not record any of his own tunes, so enter his old buddy from the days at reform school Miguelito Valdés, which had become a local singing sensation in the band Casino de la Playa. This band recorded in 1939 Chano’s “Blen, blen, blen”, which was a hit. They went on to record in early’40 his songs “Ariñáñara”, “Muna Sangangfimba”, and Guagüina yerabo”. These songs are all in the Abakuá ‘lengua’ (language) and are pure African in diction and dialect, they were a novel idea in those days, and again were big local hits for Casino de la Playa band.

This was the timeframe, (1940) that Chano worked as a bodyguard for a local senator who in turn introduced him to the owner of a radio station in Havana, who also felt he needed some personal protection. Being Abakuá, and having acquired a reputation as a tough guy, he was the perfect guy for the job. He was the radio stations doorman also, and on the urging of singing star Rita Montaner, he played congas in the reception area, playing and singing to the arriving guests, and also getting some air time as an accompanist.

By 1941 after constant self promotion and playing, Los Dandys were the hottest comparsa around and Chano led the parades dressed in top hat and tails, they popularized a song about themselves “Conga de Los Dandys” which was covered by others including Xavier Cugat out of New York, with you guessed it, Miguelito Valdés singing.

Valdés was becoming quite a star in his own right, and was doing a lot of performing and recording after his move to New York. He hooked up with Machito and his Afro Cubans for a milestone recording in 1942 which was really a primal fusion recording of Yoruban chants and rhythms with American jazz.

Chano stayed busy with his comparsas, and went on to form his Conjunto Azul during the war years. He had a brush with death in 1945, having been shot three times in a royalty’s dispute over his songs. He would recover, but it left a bullet lodged near his spine that would bother him constantly. This also added to his already tough reputation, one that he relished and maintained.

By the end of the war in 1946, he wrote “El Pin Pin” which was about the allied victory over both Germany and Japan. The recording ban over, he was able to record it with his group, but it was also covered by other bands making it another hit for Chano.

His Conjunto Azul, featuring his step brother Felix Chappottin, on trumpet, went into the studio during this time and recorded ten songs for the Seeco label out of Havana. Some of these have disappeared, and the surviving ones are available still in his record compilations.

In or around January 1947 Chano moved to New York at the urging of Miguelito Valdés, and by February were the studios at Coda Records to begin a series of historic sessions.

This was to be an all star Cuban lineup if there ever was one. Arsenio Rodriguez, Miguelito Valdés, Carlos Vidal, and Chano Pozo on congas, with Jose Mangual on bongos. The proceeded to record the first authentic rumba ever, doing four numbers in the barrio style they all came from, even one dedicated to El África, the old neighborhood. Chano then did a tribute to the Abakuá god “Abasi.” These are milestones in that they were just done with percussion, going back to the African traditional drumming, unheard of at the time. Chano did more recording in the days to come with Machito and his Afro Cubans, and also some sessions with Arsenio Rodriguez, these were more mambo and guaracha paced numbers with vocalist arrangements, and he was a conga player on those.

Dizzy Gillespie had his hand on the pulse of the latin beat for awhile, since his days with Mario Bauzá back in 1938. By 1945 he was hot and famous for his bebop band, in that same summer he had a Cuban conga player named Diego Iborra sitting in with his band .He had an inkling to go more in that direction and his old friend Bauzá recommended the conga player to him; Chano Pozo. Chano was Cuban in blood and in his sense of timing, and was a challenge for Dizzy’s band, which not all were receptive to the idea of his entry. There was a fusing of the clave beat into swing time, and vice versa, it took some doing but they figured it out, and as they say the rest is history!!

They performed at Carnegie Hall on Sept. 29, 1947 showcasing “Cubana Be, Cubana Bop,” with Chano featured on a conga solo, and going into an Abakuá chant. Cubop was born.

They would go on to record “Manteca”, which was to be Dizzy’s biggest hit ever, and had the effect of sending bandleaders scrambling to get latin charts and arrangements, and brought a slew of percussionists into the jazz genre.

Chano traveled to Europe in January of 1948 with Dizzy’s band, which was a very successful tour with the band hitting on all cylinders. They created quite a stir, and received rave reviews on the shows.

On return back to the states, while touring through the south, Chano’s congas were stolen and he went back to New York to get a replacement set. He stayed on in New York longer than he should have and as fate would have it his life would end tragically on Dec.2. Shot in a bar over a shady dope deal gone sour. He was thirty three years old.

Chano Pozo lived life as he played his drums giving it all for the moment. His contribution to jazz in the sense of bringing in his African roots drumming, is by now well documented, and is jazz history. His influence on Latin popular music is just as important, in the fact that his involvement with Chappottin, Arsenio, and recordings in the seminal Afro Cuban style, would go on to persuade a whole generation of players coming out of New York, as the Puerto Ricans Tito Puente, Palmieri Brothers, Tito Rodriguez, Ray Barretto, thus leading directly to the foundation of Salsa and the further development of Latin Jazz as a genre into itself. There is not a percussionist, especially conga player that does not owe Chano a nod of recognition for his pioneering efforts in drumming. He remains with us today and is considered “El Rumbero Mayor” a title he would surely appreciate.

The Cu-Bop Days (Vol.3) Chano with the Dizzy Gillespie Orchestra, James Moody and his Bopmen and the Milt Jackson Quintet 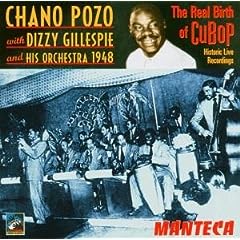 All About Jazz musician pages are maintained by musicians, publicists and trusted members like you. Interested? Tell us why you would like to improve the Chano Pozo musician page.