Cook was born in Pensacola, Florida. After playing with Dizzy Gillespie in 1958, Cook gained some fame for his longtime membership in the Horace Silver Quintet (1958- 1964); when he and Blue Mitchell left the popular band, Cook played in Mitchell's quintet (1964-1969). Later associations included Freddie Hubbard, Elvin Jones, George Coleman, Louis Hayes (1975-1976), Bill Hardman (1979-1989), and the McCoy Tyner big band. In addition to many appearances as a sideman, Junior Cook recorded as a leader for Jazzland (1961), Catalyst (1977), Muse, and SteepleChase.

Despite the fact that he gained some fame between bop fans during the last years of his life, Junior Cook died alone in his apartment in New York City, according to the testimony of the Sun Ra trumpeter Mra Oma.

From the liner notes, Junior's Cookin'

It has become common practice for a sideman to record as a leader after having been with a group for a short time. There have been cases where a sideman did more albums than his regular group leader in the course of a year. Junior Cook's pattern has been the complete opposite of this. Although he has been the featured tenorman with the Horace Silver Quintet since 1958, has recorded at length with him on four occasions, and has done a couple of sideman albums with Kenny Burrell, Cook had never made a date of his own until 1961.

Junior is from Pensacola, Florida, where he was born in July of 1934. His is a musical family, with both his father and older brother playing trumpet. He started on alto saxophone in high school, switching to tenor later on. Another Pensacola native, Gigi Gryce, gave him encouragement early in his career.

It was while he was working in a rock 'n' roll show at the Howard Theater in Washington that he first met Horace Silver. Silver was working in Baltimore and on his off-night had come over to Washington to hear Lou Donaldson who was playing in a nightclub there. Junior and Horace sat in with Lou and Cook's playing was a happy surprise to the pianist. When Clifford Jordan had to take a short leave of absence from the Silver group, Cook filled in for a week. Then from June to December 1957, he worked with the combo of bassist Gloria Bell. Two months in 1958 were spent with Dizzy Gillespie and in May of that year, Junior joined his present leader.

He has named Wardell Gray, Sonny Rollins, and Sonny Stitt as early favorites. There is no doubt that he is also fond of John Coltrane, Frank Foster, and Hank Mobley. But instead of imitating any or all of these players, he stands up to be counted as one of today's tenormen in a general stylistic area, but with his own way of interpreting the similar harmonic and melodic material of this genre.

Read more articles
"Junior Cook shows himself to be an intense, thoughtful and constructive soloist, not in a hurry to say his piece and making his contributions mean something." --John Tynan 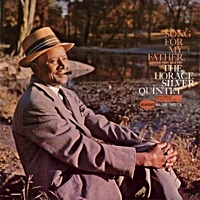 Song For My Father

All About Jazz musician pages are maintained by musicians, publicists and trusted members like you. Interested? Tell us why you would like to improve the Junior Cook musician page.