The finest baritone saxophonist of the 1970s and beyond, Hamiet Bluiett has demonstrated a huge, impressive sound, superb technique, and a mastery of his horn in every register. In his solos, he can provide an array of tonal colors and harmonic options. A first-rate free player who's as proficient on standards as in blues, Bluiett has played in many excellent groups, has led his own bands, and has been featured on numerous magnificent recordings.

Bluiett took music lessons from his aunt, who was a choral director, and started on clarinet at age nine. In late adolescence, he attended Southern University, where he studied clarinet and flute. Following a stint in the navy, Bluiett moved to St. Louis in the mid- '60s. He played with Lester and Joseph Bowie, Charles "Bobo" Shaw, Julius Hemphill and Oliver Lake. He also founded the BAG (Black Artists Group), the St. Louis equivalent of Chicago's Association for the Advancement of Creative Musicians (AACM).

He moved to New York in 1969, and joined Sam Rivers' large ensemble and Olatunji. Bluiett worked with various bands before joining Charles Mingus' quintet in 1972, with whom he remained, off and on, until 1974. While his tenure was relatively short, Bluiett helped Mingus crystalize some of the finest music of his last years. After Mingus, Bluiett performed and recorded with Abdullah Ibrahim, Hemphill and others.

Bluiett, Hemphill, Lake and David Murray formed a quartet in 1976 for a New Orleans concert. They decided to remain intact as a working unit and named themselves the World Saxophone Quartet. They continued recording and performing into the '90s, with Arthur Blythe replacing Hemphill. The WSQ has been cited as one of the key groups of the '80s and '90s; Down Beat and the New York Times consider them among the most important acoustic jazz quartets performing today. In 1996 they recorded their acclaimed Justin Time debut, "Four Now," which features African percussionists; it was also their first with John Purcell. Bluiett has also worked with other bands. He was founder of the Clarinet Family, which featured eight clarinetists, and recorded with the Black Saint label in the '80s.

Jazz This Week: Charlie Hunter, Hamiet Bluiett, "Cool Like That: A... 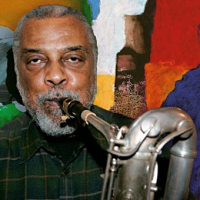 All About Jazz musician pages are maintained by musicians, publicists and trusted members like you. Interested? Tell us why you would like to improve the Hamiet Bluiett musician page.