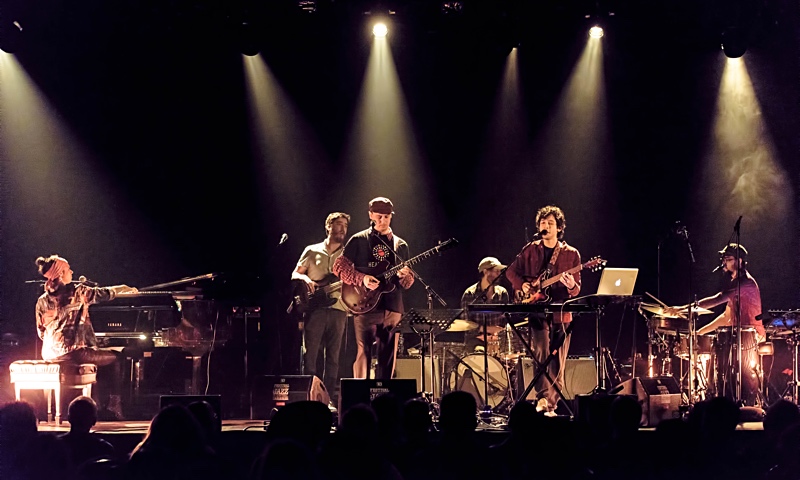 It's always a thrill to return to Le Festival International de Jazz de Montréal (FIJM). Deemed the biggest jazz festival in the world by the Guinness World Book of Records, it only takes one step out into the six square blocks closed off in the city's downtown core to believe it. Multiple outdoor stages make it possible to attend the festival for its entire 11-day run without spending a penny and still see a bevy of world-class acts along with local, provincial and national ones (not to mention mid-afternoon shows by school big bands that demonstrate arts education in the province of Québec remains a gold standard for the country). Add the multitude of ticketed indoor venues, where a seemingly countless number of performances —in venues sized from a few hundred to nearly three thousand—stream simultaneously, and the decision- making process of who to see becomes all the more a challenge. It's not so much a matter of deciding who to see; it's more about having to make the regrettable choice of who not to see.

Three outdoor Grand Spectacles—one, opening the festival, one midway through, and one on its closing night—at the massive Scene TD stage, situated on the Place des Festivals, a large concord opened a few years back when the festival also opened its Maison du Festival, which houses the festival's offices, press room, festival museum and L'Astral club venue—have been known to draw as many as a quarter million people, stretching along the Place des Festivals and pouring out onto the perpendicular Rue Ste. Catherine. As daunting as that may sound, FIJM, now in its 38th year, has truly written the book on large crowd management—from ensuring easy ingress/egress, health services (especially important on hot summer days), security that's largely invisible until the rare occasion when they're needed and more—make it a safe and enjoyable experience.

Of course, credit also has to go to the people who attend the festival—many from Montreal and surrounding areas, but also large numbers coming each year from around the world. Yes, beer is served in copious amounts, but having covered the festival since 2005, not once has there been anything but a massive party experience; everyone is there to have a great time, and that fights either don't ever break out—or if they do, they're handled so quickly and tactfully by the festival's security, that they're almost never seen—is a testimony to the festival and its attendees. Rarely, since Woodstock in 1969, have so many people gathered for a musical event with such a positive atmosphere. And while inclement weather, which has been hitting this area of the country for the past couple weeks, can and does have an impact on the number of people attending outdoor shows, equally remarkable is how many people come, with umbrellas, ponchos and other weather-appropriate clothing. Nothing barring a hurricane, it seems, is going to spoil the fun of those who come into downtown Montreal to enjoy eleven days of jazz, blues, world music and more.

And, while other jazz festivals have made recent decisions to broaden their programming to extend beyond even the furthest reaches of the jazz continuum, FIJM has always been about a broader purview. Quebec and eastern Ontario, for example, was where progressive rock got its foothold in North America during the 1970s, and FIJM continues to bring some terrific progressive rock acts through its doors, in recent years including Van der Graaf Generator, Steven Wilson...and this year, the now-octet lineup of King Crimson, a band whose 2014 revival has already gone well past its original plans and shows no sign of slowing down.

But for those who want FIJM to be a pure jazz festival, every night has more than enough acts, ranging from lesser-knowns to big names like, this year, the HUDSON Project, with Jack DeJohnette, John Scofield, John Medeski and Larry Grenadier, on a double bill with the great Charles Lloyd. The festival's longstanding By Invitation series continues to provide multi-night features for artists to dream, and put together performances that are often one-of-a-kind, never to be seen again. This year, the three invited artists were The Bad Plus, on their own and collaborating, on two additional nights, with the inimitable saxophonist Rudresh Mahanthappa and similarly distinctive guitarist Kurt Rosenwinkel; guitarist John Pizzarelli also brought three distinct shows to the same, wonderful 400-seat Gésu; as will saxophonist Ravi Coltrane, who closes the series with three exciting- looking performances.

After a roster in 2016 that was, to be honest, a little light, Festival International de Jazz de Montréal has made a major comeback this year, with one of its broadest and most enticing lineups in years. And so, with just five nights here, it was no small challenge to pick and choose from amongst far too many acts to see. But, as the reviews that follow suggest, there may have been many missed opportunities, but those taken were all well-worth attending...beyond so, in fact.

Can a band that has been away from the scene for more years than it existed during its run from 1976 to 1992 return, draw a crowd and not only come back as strong as it ever was, but actually improve? A hardcore fusion group that, first emerging from the relatively small city of Drummondville, Quebec, achieved international prominence—first as a quartet until 1987, when it trimmed down from a guitar/keys/bass/drums quartet to its most famous (and best) lineup of über-guitarist Michel Cusson, bass phenom Alain Caron and virtuoso drummer Paul Brochu—UZEB easily sold out Place des Arts' 2,982-seat Salle Wilfrid-Pelletier. Expectations were high. Could the trio that released the uniformly excellent Noisy Nights (1988), UZEB Club (1988) and World Tour (1990) recapture the magic and power of its best years, and remain relevant 26 years after the 2006 release of its 1992 swan song, The Final Concert (technically not it's absolutely last concert, but who's counting?)?

True, after an impressive but in some ways unnecessary opening act from Cuban pianist Alfredo Rodriguez and his admittedly talented trio, the crowd gave Cusson, Caron and Brochu a standing ovation as they hit the stage around 9PM, in the same venue where The Last Concert was recorded, breaking into ear-shattering applause as the trio launched into the funkified title track to UZEB Club, complete with Brochu's electronic drum intro. There was a little hesitancy, in particular on the part of Cusson—who, after leading the post-UZEB group Wild Unit for a few years moved more decidedly into film and television work, though he never gave up live performance entirely.

But by the trio's second tune, Noisy Night's more up-tempo "New Hit," everything began to fall into place, as Cusson regained his "sea legs" and delivered a solo that not only brought back memories of his blinding chops and effortless instrumental command, but also the growth and further maturity that would be expected/hoped for from a musician of his caliber. After opening the night on his fretted electric bass, slapping and popping the strings with similar ease and deep groove, Caron moved to fretless—which he used for the majority of the group's roughly 100-minute set (with three encores)—for a solo that, like Cusson, demonstrated that there's been plenty of evolution in his playing as well. It's too easy to mention the bassist that, perhaps, most popularized the instrument, Jaco Pastorius, but Caron has always possessed a style all his own, less reliant on relentless 16th-note pulses and more fluidly vocal-like.

By the time UZEB had trimmed down to a trio, guitar and bass synth technology had become as much a part of the band's sound as Brochu's electronics. But here, while Cusson had a laptop that allowed him to layer other textures beneath a guitar tone that ranged from clean and warm to gritty and overdriven, there was far less overt reliance than back in the day, when he managed to move between straight guitar tones and a bevy of synth textures with a precision and impressive speed matched only, perhaps, by Steve Morse, making it sound as if there were still a keyboardist in the band.

Cusson also used to employ far more guitars, including a Godin acoustic guitar that was a major feature of the group's look at Charles Mingus' evergreen "Goodbye Pork Pie Hat," also from Noisy Nights. But here, Cusson relied strictly on two Fender (or, perhaps, Fender-like) Stratocaster-styled instruments, and while his acoustic playing on the original was in many ways a trademark of the tune, on electric he was able to change colors and deliver a solo that was actually a sonic improvement over the original (take that, Jeff Beck!).

Caron, too, used emerging synth technologies with his electric bass back in the day, in addition to a broader range of instruments including piccolo bass and double bass. Here, armed only with a fretted and fretless electric bass, he still managed to emulate the sound of his piccolo bass by using a harmonizer during his solo on the atmospheric ballad "Après les Confidences," managing to accomplish something few bassists can: make his instrument positively soar...and sing.

Following the two opening tunes of the set, the question "what were the five stations on a riser behind the band?" for was answered when a five-piece horn section joined the trio onstage—trombone and trumpet, alongside alto, tenor and baritone saxophones...in some ways, UZEB meets Wild Unit (but stylistically still unequivocally UZEB) for a new tune, "Junk Funk." Perhaps the only complaint about the show was that, in the massive space of Salle Wilfrid-Pelletier, some of the nuances got swallowed up in the boomy hall; still, UZEB fleshed out to an octet was an inspired way to introduce a new tune and, while the horn section left after "Junk Funk," it returned for the rest of the set starting with a version of UZEB Club's "Loose," a composition filled with changes and knotty yet still somehow singable melodies.

But before the horn section's return, the trio also delivered definitive versions of UZEB Club's Latin-esque "Perrier Citron" and the greasy "Slinky"—one of only a few tunes culled from the group's time as a quartet, 1983's Fast Emotion, with Brochu taking his first extended solo of the night, blending electronics with kit work that only further cemented his ability to combine unshakable groove with terrific tone and monster chops that were always a means to an end, rather than the end itself. Cusson, back in the day a very visual player, began to get some of that back as he delivered yet another mind- blowing solo, stepping to center stage and brightly lit.

With the horns back, the octet moved into the home stretch; along with "Loose," Noisy Night's "Cool It" was rendered even sleazier at a slightly reduced tempo, while the closing medley of "Mr. Bill—Wakeup Call—Funkaleon"—the first and third culled from Noisy Nights—was a clear highlight (and one of many show-stoppers), being an incendiary mid-piece duo with Brochu and Caron, back on fretted bass.