Born in Vancouver and raised in Nanaimo, Canada, Ingrid headed east after receiving a number of scholarships to attend the Berklee College of Music in Boston. Since graduating in 1989, her life has contained a whirlwind of musical activities. From her early days playing in the subways of New York, to establishing herself as a leader and soloist in a wide array of musical genres, Ingrid has made her mark. Her three CD's for the ENJA label won her nominations from the Canadian Juno Awards, including an award in 1995 for Vernal Fields.

Her performances as a leader and as a featured soloist have taken her around the world from Canada to Japan, Australia, South America, the Caribbean and to almost every country in Europe and Scandinavia.

Jensen can be heard with the Maria Schneider Orchestra, a number of other New York-based bands, as well as with her own groups. She has received rave reviews and a strong reputation among critics and peers. In 2003 she was nominated, for the second time, alongside trumpeter Dave Douglas for a Jazz Journalist Association Award in New York. A recent highlight was being featured on Gil Evans' Porgy and Bess at the San Francisco Jazz Festival, under the direction of Maria Schneider. She was also a guest in the festival's "Tribute to Woody Shaw and Freddie Hubbard", alongside Terence Blanchard, Eddie Henderson, Bobby Hutcherson and Kenny Garrett. Some of the many musicians she has performed and or recorded with include; Steve Wilson, Jeff 'Tain' Watts, Dr.Lonnie Smith, Marc Copland, Bob Berg, Gary Thomas, Gary Bartz, Jeff Hamilton, Bill Stewart, Terri-Lynn Carrington, Geoffrey Keezer, Billy Hart, George Garzone, Chris Connor, Victor Lewis, Clark Terry, and the DIVA Big Band.

Jensen is currently on faculty at the Peabody Conservatory of Music in Baltimore. From 1990 until 1992 she was professor of Jazz Trumpet at the Bruckner Conservatory of Music and at the Hochshule for Musik in Berlin. Jensen continues to fill her schedule with an astonishing array of artistic creativity as a performer and educator. In addition to performing, she conducts master classes, clinics, and workshops. Her current summer workshops include positions at the Salzburg Jazz Seminar, the Centrum Jazz Camp at Port Townsend, and The Brubeck Institute.

From: Sheroes
By Ingrid Jensen 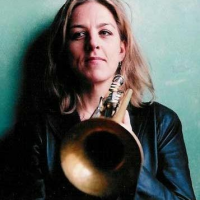 All About Jazz musician pages are maintained by musicians, publicists and trusted members like you. Interested? Tell us why you would like to improve the Ingrid Jensen musician page.