If one were attempting to design a prototype for the quintessential contemporary musician in the African-American tradition, trumpeter/fluegelhornist/composer Russell Gunn would be an ideal model. A certified member of the hip-hop generation by age (born in 1971) and geography (the hardcore ghetto of East St. Louis), Russell's early aspirations in the world of rap music took precedence over the trumpet that he began playing in fourth grade. When he reached sixteen, the deadline he set for his hip-hop career to take off, his dedication to the art of jazz took shape.

Rather than abandoning the music he loved, he simply applied its energy, spirit and fiercely proud intellectual rage to the jazz idiom, creating a synthesis that is truly contemporary and singular, exemplified by his groundbreaking group, Ethnomusicology.

As the name clearly indicates, Gunn, like most of the finest young musicians to emerge in the past decade, has developed his music from a wide variety of musical influences. In his case, Gunn weaves together elements of Cuban, Brazilian, African, D.C.'s "Go Go" music, and Hip-Hop into an adventurously progressive jazz style that pays tribute to its tradition while also extending the form.

Born in Chicago, Russell was nine years old when his family moved to East St. Louis, Illinois. Always interested in music, at the age of 10, he selected the trumpet as his instrument and began a nearly decade-long membership in his school band where his cousin Anthony Wiggins, the band's featured trumpeter, and the band director Ron Carter (not the legendary bassist) fueled his musical interest.

But it was really the popular rapper LL Cool J who was his primary inspiration and first musical idol. While performing at school talent shows, making demos and constructing adventurous rhymes, Russell began to develop a deeper understanding of the jazz language which had always been so daunting, but fascinating to him.

It was while working at a club called Cicero's in 1993 that the great saxophonist/composer and co-founder of the World Saxophone Quartet, Oliver Lake happened to hear the young trumpeter, and immediately invited him to come to New York for a performance at the Brooklyn Museum.

Suffering undue criticism from the neo-conservative jazz mainstream for his dreadlocks and hip-hop culture style of dress, Russell's virtuoso abilities and command of all musical styles from funk to the avant-garde evidenced a serious new talent on the scene.

A fortuitous appearance at a 4am jam session at New York's famed Blue Note club was heard by Denis Jeter, an assistant to Wynton Marsalis at Lincoln Center, who recommended him for the third trumpet chair in Marsalis' Blood on the Fields. Receiving rave notices for his work with the Lincoln Center Jazz Orchestra, Gunn began to earn recognition as one of the most dynamic and exciting musicians of his generation. Continuing to freelance with Lake and various other top jazz artists, Gunn began leading his own groups in 1994 and issued his first recording, Young Gunn.

Touring all over the U.S. and Europe in 1995-6 with Branford Marsalis' Buckshot La Fonque, Gunn's eclectic musical approach also brought him together with artists like Cee-Low from the Goodie Mob and Maxwell, while continuing to perform with his own groups at New York's most prominent clubs.

With a singular style that incorporates the influences of masters like Freddie Hubbard, Miles Davis, Lee Morgan, and especially the extremely underrated Booker Little, Gunn has continued to gain recognition for his own music through touring and well-received albums, including the 2000 Grammy-nominated Ethnomusicology, Vol. 1.

Despite spending much of 2000 touring the U.S. and Europe with D'Angelo, Gunn played a number of American festivals, including San Francisco, Bell Atlantic and Earshot, and provided workshops and residencies at various U.S. Universities. This year brings him to a wide range of venues, including the Kennedy Center, Philadelphia's Mellon Jazz Festival, the Ottawa Jazz Festival, the Atlanta Jazz Festival, the Moers Festival in Germany and various clubs, universities and concert halls. He was also commissioned by San Francisco Jazz to create a new work and to provide a week of workshops at colleges in the Bay Area. Show less 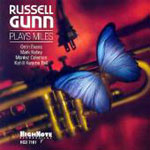 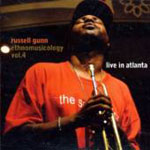 All About Jazz musician pages are maintained by musicians, publicists and trusted members like you. Interested? Tell us why you would like to improve the Russell Gunn musician page.