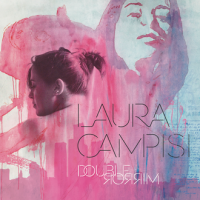 Contemporary jazz vocalists tend to fall into two camps, those who follow the jazz singer tradition of Ella, Billie, Sarah and the other icons and those who experiment with their sound and repertoire. The latter group includes people like Elizabeth Shepherd, Katie Bull and Rebecca Martin. Laura Campisi is another name you can add to that list.

Campisi is originally from Palermo, Sicily but now makes her home in New York City. Her music draws from jazz, soul, hip hop and rock with a fluid approach that changes from track to track on this CD. Part of her unique sound stems from the makeup of her backing band which contains two drummers and both electric and acoustic bass, a combination that leads to all sorts of differing textures, like the rolling percussive sway of "Luckier" accented by Giovanni Falzone's sassy trumpet and the hushed swoon of Björk's "Hyperballad" where Gianluca Renzi's undulating electric bass stands out.

The songs here are a mix of familiar standards, Campisi's original compositions and rock tunes from Lou Reed, Jeff Buckley and the aforementioned Bjork. Campisi's voice is mostly an intimate, girlish coo capable of projecting great drama and it is flexible enough to ride a variety of rhythms like the mysterious electric bass and steel pan weave of "Ironman" and the audacious go-go beat of "Love For Sale" which also features the strutting violin of Zach Brock.

"Nardis" starts as an abstracted collision of plucked and bowed basses, tumbling percussion and dramatic recitation before it swoops into an elaborate, Mideastern treatment of the familiar theme. On "Here Where I Stand" Campisi is chatty and carefree over an alternately flowing and heavy rock beat laid down by the two drummers and baritone saxophonist Martin Pantyrer. Lou Reed's creepy S&M classic "Venus In Furs" gets an unusually fast-paced treatment with Renzi's springy bass complementing Campisi's busy vocal and Jeff Buckley's "Mojo Pin" moves between quiet brooding and rocky swagger with Campisi singing at her most forceful. The singer's own"Al Risveglio" has a drawling, dreamy sound with Campisi singing quietly over the basses and Vincent Herring's soulful alto sax in the trance-inducing manner of a singer like Mazzy Star's Hope Sandoval.

Laura Campisi is an unique singer with a really eclectic approach to music. She achieves a lot with basically just creative use of bass and drums and a wide imagination. Her music is gorgeous, energetic and daring. She deserves a really wide hearing.