Gianluca Renzi was born 1975 in Frosinone, a little italian city near Rome and he’s fast becoming one of the most interesting musician in Europe. He has been touring all over the world as a sideman with some of the most known international musicians and as a leader of his own “sextet” and “all star orchestra” and he just moved to New York city.

Gianluca Renzi is an acoustic and electric bass player and arranger as well. He has Degrees in classical music performance and in jazz performance, jazz composition and jazz arranging from the Italian Conservatory of Music. He also studied with Marc Johnson, Miroslav Vitous, Palle Danielson and John Patitucci.

As a leader he has recorded 3 records with his own bands for the italian label WIDE SOUND. One of those record, “Don’t stop your mind” has been considered one of the best record of 2005 from the main jazz magazine in Italy “Musica Jazz”.

As a coleader he has recorded 3 records for the famous japanese label VENUS RECORD with the band called “Roma trio”. Those record have been best sold records in Japan in 2007 and 2008.

He has performed as a leader and as a sideman in the some most important cities of the world such as Tokio, Nagoya, Osaka, New York, Seoul, Beijing, Paris, Strasbourg, Geneve, La Valletta, Cartage, Rijeca, Valencia, Siviglia, Lussembourg, Klaypeda, Rotterdam, Amsterdam, Cannes, Beyrouth, Rome, Milan and many cities around Italy.

As a composer and arranger, Gianluca Renzi has collected various experiences writing for chamber orchestra, big band, combo jazz orchestra, sextet, octet, quintet and classical trios. He has been writing arrangement for his own orchestra, sextet and for other musicians and agencies as well such as Rosario Giuliani, Giovanni Mirabassi, Maurizio Giammarco, LKT trio, and the famous advertising agency Saatchi and Saatchi.

As an educator, Gianluca Renzi has been teaching at the Saint Louis Muisic Center of Rome for many years working along with of the best international teachers in the actual music scene.

Actually he is member of the international trio “Mirabassi-Renzi-Parker” that involves the pianist Giovanni Mirabassi and the drummer Leon Parker, he is also leader of the trio “New York Reunion” with Orrin Evans and Gene Jackson and of the “Gianluca Renzi All star Orchestra” composed by some of the best italian jazz musicians. 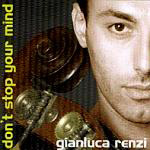 All About Jazz musician pages are maintained by musicians, publicists and trusted members like you. Interested? Tell us why you would like to improve the Gianluca Renzi musician page.