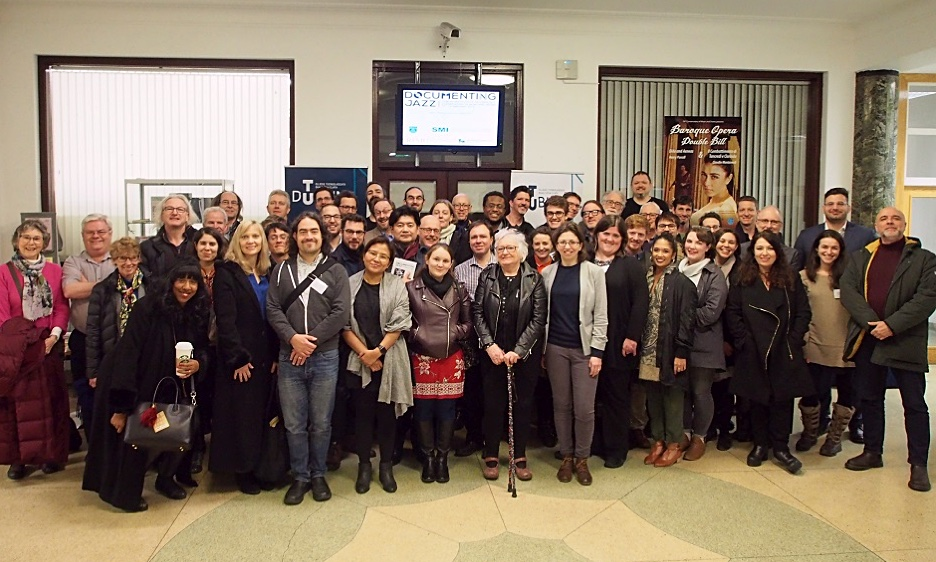 By IAN PATTERSON
February 28, 2019
Sign in to view read count

Most jazz isn’t about jazz, at least in terms of how it’s consumed —Professor Krin Gabbard, Columbia University

Jazz music, which has pretty much always meant different things to different people, has been comprehensively documented since its arrival in the first decades of the twentieth century.

The most obvious form of documentation, that's to say studio recording, is almost as old as the music itself, whilst live recordings, both official releases and bootlegs, radio and television broadcasts, provide copious evidence of what live jazz has sounded like at almost any given point in its history.

Add to that the histories, biographies, autobiographies, individual country studies, plus all the live reviews, photographs and opinion pieces from specialist journalists the world over and it's safe to say that jazz has been extremely well served by the documenters. Or so it seems.

The academia-driven New Jazz Studies—surely in need of an updated moniker a quarter of a century on?—however, thrives on the premise that there is an awful lot about our understanding of jazz that merits serious analysis or revision.

To that end, over a hundred academics, authors and independent researchers gathered at the Technological University Dublin Conservatory of Music and Drama, where, for three days, they presented multiple papers on a broad range of subjects related to the documentation of jazz.

Documenting Jazz is the brainchild of Dr. Damian Evans. Jazz bassist, academic and one of the original founders of the Galway Jazz Festival, Evans has been a key figure on the Irish jazz scene, both as a musician and a researcher, for over a decade. In welcoming the delegates Evans acknowledged the Rhythm Changes project as the major inspiration for Documenting Jazz. Since 2013, the annual Rhythm Changes conference—held in a different city each year—has brought together the world's foremost thinkers on jazz, shedding much light and raising just as many questions about the music's history and attendant cultures.

The inaugural edition of Documenting Jazz was no less ambitious, attracting high-profile keynote speakers and an impressive range of international delegates. Alongside the dozen or so Irish presenters were academics and researchers from Australia, Russia, Indonesia, The USA, the UK, Italy, Norway, etc. Three of the delegates no less, Francesco Martinelli, Tish Oney and Bruce Lindsay are contributors to All About Jazz.

"Most jazz isn't about jazz, at least in terms of how it's consumed." This thought-provoking statement was written by Kirin Gabbard—one of the keynote speakers at Documenting Jazz—in his book Jammin' at the Margins: Jazz and the American Cinema (University of Chicago Press, 1996), and it's a statement that invites reflection. How jazz is presented by musicians, promoters and labels, how it is consumed by jazz fans and perceived by the wider world in general, raises multiple questions as to the meaning of jazz. The meaning of jazz? Well, in truth that should be meanings, for after all, as Documenting Jazz demonstrated, jazz often means quite different things to different people at different times.

The formalities got off to a nicely informal start in the Technological University's basement canteen, where Dr Evans, Dr Kerry Houston (Head of Department of Academic Studies) and Dr Lorraine Byrne Bodley (President of the Society for Musicology in Ireland) bid a warm welcome to delegates, without too much fuss or fanfare.

Gender is one of the hottest topics in jazz, in fact in music in general, with numerous festivals of all stripes signed up to the Keychange/PRS Foundation's manifesto for 50-50 gender equality on festival programmes by 2022. This initiative reflects wider societal awareness of gender inequality, and the world of jazz is no exception.

The first paper in this session, presented by James Reddan of Western Oregon University was entitled Perceiving Gender in Jazz: Documenting the Past, Present and Theorizing of the Future. Reddan began by stating that perceptions of gender in jazz have been influenced by documentation—or lack thereof—and how such documentation has been perceived with regards to gender stereotypes.

Whilst acknowledging that there has been an increase in the roles of both men and women in jazz since the 1990s, Reddan noted that jazz documentation still presents a perception of clear gender differences. How jazz is taught, the images students see, the material they read and the music they hear, is key in establishing notions of gender in jazz.

To support this argument, Reddan presented the results of a qualitative survey he conducted with thirty undergraduate music students, split equally between male and females. Focus groups of ten members met on different occasions to examine jazz books (The Oxford Companion to Jazz, Women in Music), magazines (Downbeat) and over a hundred album covers. Participants noted that men were bandleaders and played the loud instruments like trumpet, drums and trombone while women played violin, piano or sang. Male composers and lyricists received greater attention than their female counterparts.

It was generally agreed amongst the survey participants that when it comes to imagery, women jazz musicians/singer tend to be hyper-sexualized. One student remarked how her first experience of a jazz singer was Jessica Rabbit, the sex-symbol toon wife of Roger Rabbit. Students found that writing about jazz women was mostly done by women and was largely objective, while articles written by men on women musicians seemed more critical and opinionated. Tellingly, students noted that "for both women and men there was an exaggerated focus on the artist as object rather than artist as musician."

[In Dale Chapman's The Jazz Bubble: Neoclassical Jazz In Neoliberal Culture (University of California Press, 2018) there is an illuminating chapter on Dexter Gordon's 1976 homecoming that illustrates the objectification and stereotyping that typically surrounds iconic male jazz musicians in the press.]

Returning to the survey, the students also noted racial stereotypes in the material studied. One participant related that as a black singer the common assumption was that she must be a jazz or gospel singer, when in fact she was studying opera.

In conclusion, the survey participants noted the need for a non-binary approach to jazz documentation. If gender stereotypes in jazz are to change it will depend on how jazz is documented moving forward, argued Reddan, adding that care is needed when marketing jazz, and equally, when teaching it.

The second presentation on jazz and gender, entitled In Her Own Words: The Current Reality of Women in Jazz, was jointly given by Alexandra Manfredo and Kiernan Steiner from the University of Miami, Florida and Arizona State University respectively. Their research has been influenced by the work on gender politics and sexism in jazz recounted in Jazzwomen (Indiana University Press, 2004) by Wayne Enstice and Janis Stockhouse.

Having conducted interviews with a small sample of female jazz musicians in higher education, Manfredo and Steiner began by quoting the interviewees. The musicians spoke of dealing with and managing other people's expectations of them, of putting up a wall to counteract the predatory sexual climate, of being described as "the partner of another jazz musician", of feeling pressured to use macho gestures when leading a big-band or to yell when directing a band to get results.

One of the biggest obstacles is the "othering" of women in jazz, whereby documenting them and their contributions to jazz as somehow separate from men only disparages them and their gender. In jazz histories women are often grouped together with little consideration of their individual contributions.

Quoting musicologist, music historian and author Sherrie Tucker, Manfredo said: "And to add women in means they are not already in, subtract them and you still have jazz. Women jazz musicians go missing unless the framework is explicitly 'women in jazz.' But 'women in jazz' depends on the assumption that jazz does not already have women in it -a frustrating premise for women who play jazz and the people who write about them."

This imbalance, Manfredo and Steiner noted, is also reflected in jazz programmes in the United States, many of which don't have a single female professor. As regards female jazz students, Manfredo and Steiner found that their respondents were often the only female on a course, or one of a small handful, leading at times to feelings of self-doubt, anxiety and tokenism. In both the classroom and rehearsal environments, the paper's authors stated, many interviewees complained of sexual harassment, sexual discrimination and gender stereotyping at the hands of both their professors and male students.

Going forward, Manfredo and Steiner advocated initiatives such as blind auditions for jazz ensemble placements, curriculum adjustments that address women role models, as well as training on inclusion and diversity for all students and staff.

The Q&A session that followed indicated that there was much more to discuss on the issue of gender equality, such as differences in generational attitudes and responses towards objectifying or discriminatory behaviour. Or worse. As Jen Wilson of Jazz Heritage Wales pointed out, more serious forms of abuse are frequently not reported.

Wilson, a veteran jazz pianist, has written a history of Welsh Jazz and related how much of the personal testament of women jazz musicians interviewed was too sensitive, for the women themselves, to be published. "What's in an oral history is not always all that's actually said," Wilson stated. "It's what you are able to put out. There's a clean history, there's a dirty history and the dirty history tends to be hidden."

Almost three times as many women declined to respond to Manfredo and Steiner's interviews as those who did. What this signifies is impossible to say. Perhaps, despite assurances of total anonymity, many women felt that participation might jeopardize their careers. Or it may just be that most women were just too busy leading their own bands to spare the time.

Many more women are leading jazz ensembles than ever before, which is undoubtedly a good thing, but one of the reasons for this is perhaps because men, in the main, are still reluctant to invite women into their bands. Or the jam sessions. As jazz forges ahead in the twenty-first century, the music's oft-lauded claims as the most democratic and inclusive form of music ring rather hollow.

There were many fascinating sessions during the three days of Documenting Jazz but surely none as important as the one on jazz and gender.

Central to the on-going history of jazz is the archiving of jazz material. The oral histories, venue and festival programmes, the diffusion of jazz in popular culture, the media's reportage on jazz, specialist magazines, photographs, posters, flyers, recordings, newspaper obituaries-all are part of jazz's story. If not carefully archived and preserved, then much of jazz's history would be lost.