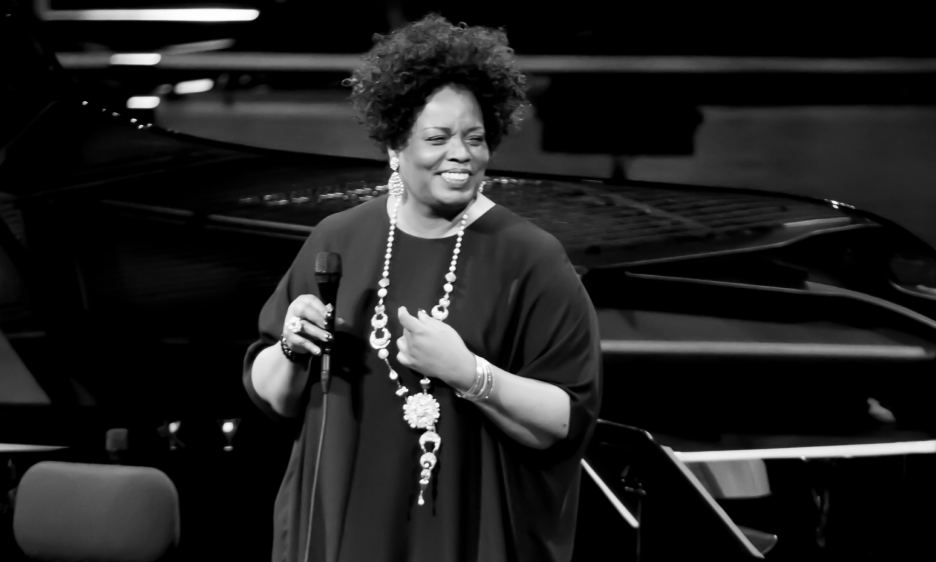 Dianne Reeves delivered a gracefully enchanting and heartfelt Valentine's Day weekend performance at The Rose Theater in Jazz at Lincoln Center's Frederick P. Rose Hall. In its eighth year, JALC is still the most romantic venue for elite Jazz and unrivaled artistry. Reeves' grand entrance was eloquent and sophisticated as the band played softly amid her arrival. She held the microphone in her hand and embraced the audience with a scintillating smile as she made her way through a thunderous ovation to center stage.

Astonishing range and elegant vibrato—Dianne Reeves has one of the most incredible voices across any genre of music. The 2018 NEA Jazz Master and five-time GRAMMY award- winning singer-songwriter is an extraordinary powerhouse and musical genius. Joined by Reginald Veal on drums, Peter Martin, music director, pianist, and keyboardist, Romero Lubambo on guitar, and Terreon Gully on drums, Reeves' intonation, impeccable control, and rich expressive vocals seemed to transmute the audience's emotions with each scat and ballad. The depth of her regal presence and evocative melodies are timeless and her music penetrates the soul.

Moments before singing "I Remember," written by Patsy Moore, Reeves took a moment to reflect on the recording she did 20 years ago as a tribute to her father who passed away when she was young. Recalling its significance, she illustrated how it has transitioned from the song she once sang for her father to one that now holds memories of her cousin, the late great George Duke, whom she recorded and played with for many years. Duke produced her Bridges album (Blue Note Records, 1999) during the Mulgrew Miller sessions in New York City. Reeves gently took in a deep breath and mentioned that she missed them both.

The touching moment opened up a space of wisdom and healing with remembrance and testament to how music sustains memory and helps us transcend the tides of life.

The duration of Reeves' set featured swooning balladry and dreamy vocals that filled the entire room with love and contentment. Some couples grasped each other's hands a little tighter, others moved a bit closer to their loved one—melting into the evening's mood. Whether attendees were single or smitten Diane Reeves gifted them a most amazing and unforgettable performance.