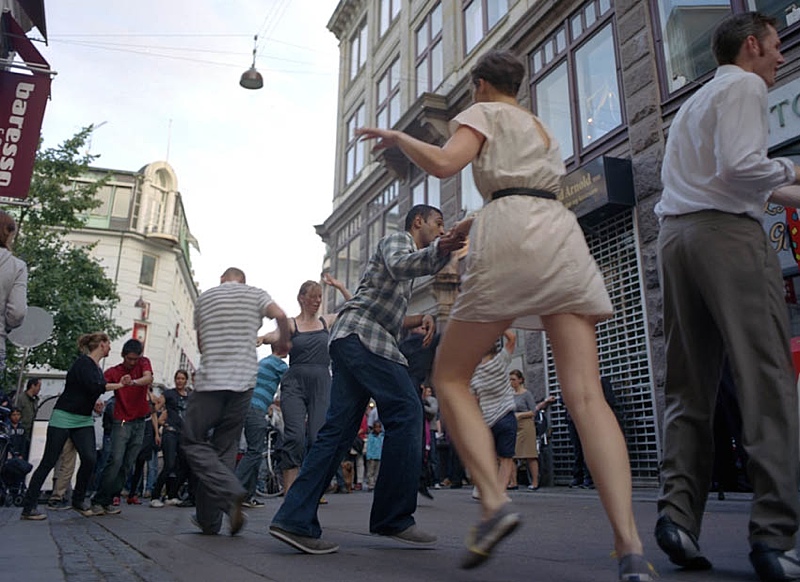 The study of jazz in academic institutions may be a relatively modern trend, but the presence of over a hundred academics from South Africa to Russia and from America to Portugal at the Rhythm Changes: Rethinking Jazz Cultures conference, at Media City UK, Salford, underlined that it's an undeniably global phenomenon. It's also a sign of the continuing evolution and maturation of historical, socio-political, anthropological and musicological perspectives on music that is more than a century long in the tooth.

There may be some who feel that jazz and academia make for odd companions, mutually exclusive fields, but if academic scrutiny is good enough for poetry, literature, graphic art, cinema, theater and other forms of music, then why not jazz? And as the Rhythm Changes: Rethinking Jazz Cultures project leader and Director of Salford Music Research, Tony Whyton, pointed out, the participation in the conference of jazz media, promoters and performers also afforded an opportunity to rethink the relationship between the academic world and the broader creative industries.

Time for A Rethink

Such rethinking is perhaps overdue, too. Whilst there are still those who believe that the last revolution in jazz was the advent of jazz-fusion in the 1970s, others point to the current age as perhaps the most fertile in the 100-year history of the music. Things have certainly changed and moved on from 1970s jazz-fusion and the neo-traditionalist backlash of the 1980s. The dawn of cheap travel, the birth of the internet, home recording and independent record labels have together conspired to bring about greater cross-pollination of musical styles and a greater proliferation of jazz than ever before. Musicians don't have to meet or even know each other to record a CD, and the click of a button can send the music to jazz lovers—and the money to the musicians—instantaneously, to every corner of the world.

If the way the music is produced and disseminated has changed radically, so too has the way it's promoted and consumed. With traditional print magazines and newspapers increasingly faced with a choice between distributing for free and going bankrupt, a significant sea change is also shaking up jazz media. Radio and television largely eschew jazz from their programming, and combined with the decline of major jazz record labels, the era of the jazz star has all but disappeared. Giants like saxophonists Sonny Rollins, Wayne Shorter and Lee Konitz, drummer Roy Haynes and pianists Cecil Taylor and Ahmad Jamal represent the last of the so-called golden age of jazz.

The passing of jazz's historically iconic figures, rather than sounding the death knell of the music, may instead announce a new dawn, one where upcoming generations of jazz musicians can experiment unencumbered by the weight and expectation of historical conformity, of carrying on the tradition. This passing of the old guard and the growth of distinctive new voices around the world also offers us the opportunity to rethink jazz's history in a less romantic light, to look beyond the overly simplistic linear history that tends to ignore the often complex, transnational history of jazz, and in doing so, to look at the jazz music of today with fresh eyes.

The Rhythm Changes Project—setting the scene

The 2013 Rhythm Changes: Rethinking Jazz Cultures conference brought together delegates from the world of academia, a few independent researchers and a smattering of jazz media folk to do precisely that—reexamine the music, the forces that have shaped it, its socio-political impact and trends, old and modern, in all things jazz-related. The wide-ranging papers presented embraced a century of jazz across five continents and were delivered with—for the most part—the intellectual rigor and detachment that is the code of academics. That's not to say that the delegates were emotionally detached from the music; on the contrary, many of the assembled are jazz musicians, and all are passionate fans and advocates of the music.

For four days, thinkers from America, the UK, Ireland, Spain, Italy, Portugal, South Africa, Australia, Germany, Austria, Russia, Denmark, Norway, Canada, Belgium, Finland and Holland presented 20-minute papers on a surprisingly wide variety of subjects and engaged in lively, often fascinating debate. In addition, keynote presentations, panel discussions, poster exhibitions and a dash of live music provided a diverse and stimulating package for those in attendance. The majority of attendees conformed to the grey hair/no hair demographic of most jazz audiences at concerts and festivals in America and Europe, though the steady flow of tweets that filled the electronic board in the foyer proved two things firstly, that the social media that's changing the way we communicate—and the way jazz is promoted—is not the sole preserve of youth, and secondly, that academics are also prone at times to the most banal of pronouncements.

Funded by Humanities in the European Research Area (HERA) as part of its Cultural Dynamics: Inheritance and Identity program, Rhythm Changes is a three-year project that uses jazz as a platform to overturn the stones on knotty—and sometimes controversial—issues such as jazz and national identity, jazz as a political tool, jazz ownership and jazz as a transnational cultural practice. It also challenges reductive binary distinctions such as American versus European jazz, and jazz as art/popular culture.

The Rhythm Changes: Rethinking Jazz Cultures project began life in 2011 as a 13-strong team drawn from seven institutions in five European countries. The project has snowballed however, and the ranks have been swelled by an ever- growing number of partners, musicians and scholars. In the short life of the Rhythm Changes: Rethinking Jazz Cultures project the team has published a number of important books and articles on salient themes, notably Whyton's own Jazz Icons: Heroes, Myths and the Jazz Tradition (Cambridge University Press, 2010) which, perhaps more than most books in recent years, succeeds in reimagining jazz history and invites new thinking on its iconic figures and their impact and on popular mythologies surrounding jazz.

Three parallel sessions of between three to four 20-minute presentations ran from morning until afternoon, with such a wide and fascinating range of topics on offer it wasn't always an easy task to decide which ones to attend and which to miss. Themes included jazz's fusion with distinct musical forms, jazz and digital media; venues and festivals; improvisation; jazz criticism; jazz education; South African jazz; jazz media; national/transnational discourses; jazz in violent spaces; jazz in poetry and fiction; jazz repertoire; swing and symphonic jazz; historiography and anthropology; jazz vernacular, European identities, and jazz canons. 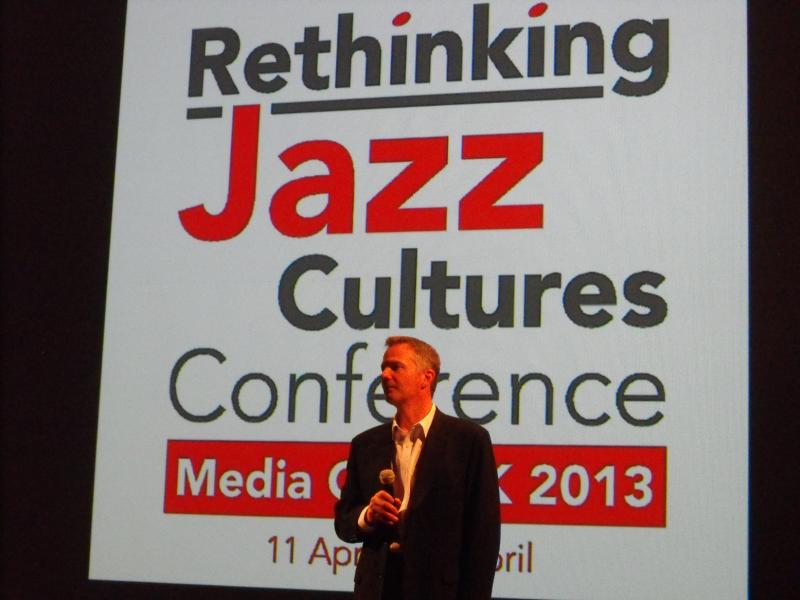 Friday and Saturday mornings' keynote presentations by David Ake (Director of the School of Arts at the University of Nevada) and E. Taylor Atkins (Professor and Director of Undergraduate Studies in the Department of History of Northern Illinois University) set the tone for many of the discussions that ensued as the three-day conference unfolded. Ake, a jazz pianist and author of several publications including Jazz Cultures (University California Press, 2002) and Jazz Matters: Sound, Place and Time since Bebop (University California Press, 2010), gave the audience plenty of food for thought with his presentation entitled: "After Wynton: Rethinking Jazz Cultures in the Post Neo-Traditional Era." Ake began by acknowledging the appropriateness of the conference's subtitle, saying "it highlights so succinctly that jazz has been created, embodied, experienced and valued in many different ways by many different people and these various communal creations, embodiments, experiences and valuations are ever in need of review and reassessment."

Beginning from the premise that influential trumpeter/educator Wynton Marsalis no longer attracts the same attention or raises the hackles that he once did for his shaping of the neo-traditionalist jazz panorama in the 1980s and 1990s or for his pronouncements as to what constitutes "authentic" jazz, Ake wondered if we might not miss Marsalis before too long. "The clarity, simplicity and widespread acceptance of Marsalis' neo-traditionalist message provided many of us scholars and teachers with a handy reference point from which to offer our own alternative visions of the music," Ake observed.

Addressing the audience, Ake asked: "How many of you, even within the past few years, have cited Wynton Marsalis and the people and institutions with which he's so closely associated—Lincoln Center, Stanley Crouch, the Ken Burns' documentary and so on—as representing pretty much the polar opposite of whatever else you thought the jazz world was, is, could or should be?" There was a healthy show of hands.

Marsalis definition of jazz as blues and swing is narrow, but if we refuse to accept Marsalis' definition—asked Ake- -then just how do we define jazz? How can jazz maintain a meaningful identity, when it covers such a vast sonic and cultural terrain? "It behooves us to have a response at the ready," Ake stated, "and ideally that response should be as forthright as Marsalis,' while at the same time reflecting the adaptability that so many of us associate with this music." Jazz, he posited, "is a set of ideas shaped by certain musical forms but also by the way people write, teach and talk about those sounds and who creates, sells and listens to them." This viewpoint was central to many of the conference presentations and inherent in the discussions that took place during coffee breaks, at lunch and over drinks in the evening.

E. Taylor Atkins—Having Your Cake and Eating It

Atkins has authored a number of publications, including Blue Nippon: Authenticating Jazz in Japan (Duke University Press, 2001) and his talk went under the curious title of Let's Call This: A Paradoxical Platform for Transnational Jazz Studies. In it he advocated an inclusive approach to the new jazz studies, one that rejects reductionist theories of essentialism and nationalism when considering jazz outside America. In a nutshell, Atkins advised scholars to heed "the simultaneous relevance and irrelevance of time, place, and culture when examining the music in diverse contexts." Hence the paradox referred to in the paper's title.

Atkins warned against adhering to simple jazz nationalisms, the idea that jazz in Japan sounds somehow Japanese (or for that matter that jazz in Norway sounds Norwegian) and if it doesn't then it's merely a pale imitation of superior American jazz. Atkins noted that "jazz is an ideal mechanism for abolishing binary thinking that posits that individual expression is—or should be—determined by something called 'culture.'" In a balanced argument, Atkins first made the case for jazz's multi faceted political, social and cultural meanings according to the time, place and culture, and then proceeded to offer an alternative theory by refuting the possibility that time, place and culture can "fully explain or account for the music produced." Appropriately, in a paper that promoted the acknowledgment of paradox when approaching jazz studies, he highlighted some of the ironies inherent in jazz's story and the complexities involved in trying to compartmentalize it into neat, easy-to-digest packages.