A jazz legend from before the music existed in name; separating the truth from the myth in the life of trumpeter Bunk Johnson has never been simple. While Johnson claimed he was born in Louisiana in 1879, it's become generally accepted that his birth was actually 10 years later. He’s said that he performed with Adam Olivier and Buddy Bolden's orchestras in the 1890s, as well as with circuses, minstrel shows and on ocean liners. Whether or not that was all true, is not proven.

Louis Armstrong did hear him in New Orleans around 1915 and recalled, "Bunk played funeral marches that made me cry!" Johnson continued to tour throughout the South at one point backing early blues queen Ma Rainey until dental problems forced him to retire in 1933. After Armstrong and Clarence Williams celebrated Johnson's music skills, authors Frederick Ramsey and William Russell located him in 1939.

After getting a new trumpet and set of teeth, Johnson recorded extensively in the early and mid 1940s. His work at this time (1946) was a part of a jazz revivalist movement along with the work of other New Orleans musicians, including clarinetist George Lewis and drummer Baby Dodds. Johnson's temper also became known and after this band broke up, he performed as a soloist and in the movie New Orleans with Armstrong and Billie Holiday.

Bunk Johnson died after a series of strokes in New Iberia, La., in 1949.

The Last Testament Of... 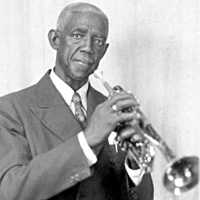 All About Jazz musician pages are maintained by musicians, publicists and trusted members like you. Interested? Tell us why you would like to improve the Bunk Johnson musician page.